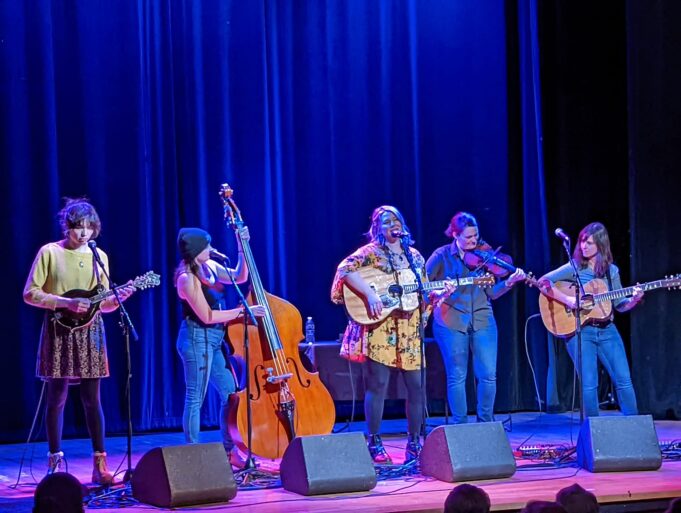 February 11 2022 at the Shea Theater in Turners Falls, MA (Photos and video by Angel Simon, review by LMNR)

I have been hearing about Della Mae for years now, dating back to when I was into bands like Girls Guns and Glory. I didn’t really know much about them, other than that they vaguely fit into some sort of Americana, Bluegrass, Folk category. I sometimes revel in the idea of seeing a show when I know really next to nothing about the band.

We went to the theater in bucolic Turner’s Falls, MA- I sometimes called it Mayberry when I was living there and describing it to others- and got a nice tour of the theater. We zipped down the street and had a great dinner at the Black Cow, which may end up being my go to restaurant when I visit the Shea, which I plan to do a lot in the coming months.

First up that night was Billy Keane. I have seen him a few times before in his band, Whiskey Treaty Road Show, but this is my first time seeing his solo show. He came out to appreciative applause and launched into a quick set, just him and his guitar and harmonica. He was the perfect fit for this night, which seemed to draw the NPR / Grey Fox / Green River crowd. Being that this show was being produced by Signature Sounds, the label for Lake Street Dive and promoters of the Green River festival in nearby Greenfield MA- it all was making sense. Keane fired through his material, telling stories, joking with the crowd. Everyone seemed to really just enjoy being out and about, appreciating live music and being together after this long Covid winter, both the real winter and the longer Covid challenges.

Keane played material from his upcoming solo album, a new album he has yet to record, and older material that he’d recorded a dozen years earlier. He has an easy manner, and a very wide open vocal style that makes him easy to listen to while not being easy listening at all. He falls somewhere between folk music, singer songwriter, and indie rock in his vibes, and his appreciation for the night flowed off of him.

After a quick intermission, Della Mae came to the stage. They stood side by side, five wide across the stage- five women- from left to right performing Maddie Witler on mandolin, Vickie Vaughn on upright bass and vocals, Celia Woodsmith on guitar/washboard and vocals, Kimber Ludiker on fiddle and vocals, Avril Smith on lead guitar picker and vocals.

The band was great, spot on vocal harmonies, top notch picking, and great songs. They let fly with a good twenty songs from start to finish and covered nearly every sub genre within the acoustic music / Americana style that is their signature. Seamlessly from song to song they showcased their nuanced ability on everything from bluegrass to traditional country, American fiddle songs, Texas swing, and all of the blurred lines in between. The crowd was super appreciative- attentive where it was required, and hootin and hollerin when it was called for.

Della Mae showed their appreciation for the locale, name checking the local Mexican food truck, and Woodsmith calling out several relatives of hers from the area who were in attendance that night. They had the audience in their palms, from the stories to the songs, and the long line at the merch table afterward was testament to their ability to win over the crowd.

Each band member was quite adept at their instrument, and also quite adept at coming together with their band mates to form a solid vocal and instrumental sound. They could stand toe to toe with any other band in terms of their quality picking ability, or their quality song writing. Few bands have the ability to deliver on both of those promises, but Della Mae did in spades. Their ability to dip into traditional American heritage music did not disguise their own progressive intellect and morals, without being preachy. A timely cover of Neil Young’s “Ohio” came directly after a pandemic written song that pleaded for tolerance and justice.

I was not familiar with their catalog, one of such quality that it earned them a Grammy nomination. But the easy going nature of the band coupled with their strong desire to engage with the appreciative audience made them easy to love. The band had the ability to take this New England theater and make it feel like it was a giant living room, in which this talented band showcased their music and the audience felt ‘included.’ This is what we are all seeking these days- good times, good music, and a feeling that we all belong together.

If you are fan of this style of music, run to the next Della Mae show, you will not regret it.

And if they are not going to be in your neighborhood, you can still check out an upcoming show. “We wish we could be in all the places at once… That’s why we’re streaming our upcoming show at The Grey Eagle on March 5 with our friends at Mandolin. Join us from your living room, porch, hot tub, or wherever you spend a chill Saturday evening.”