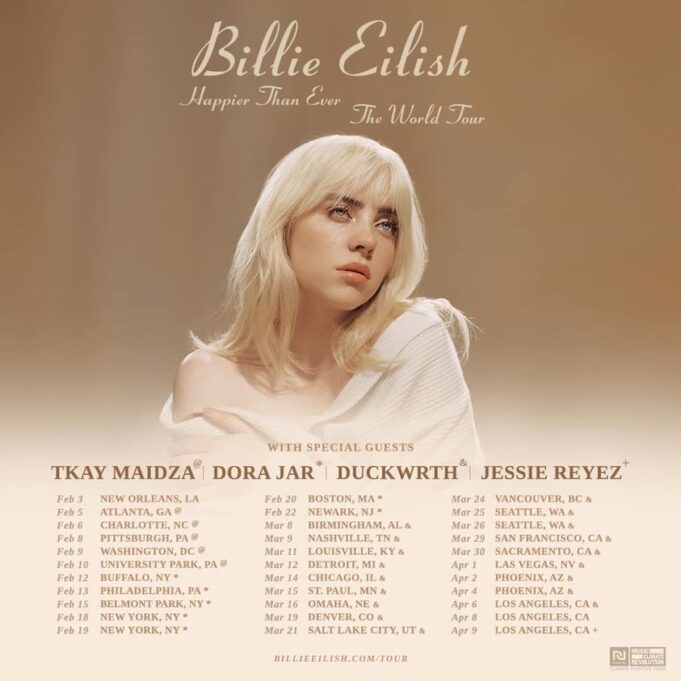 Billie Eilish continued the “Happier Than Ever: The World Tour” with an incredible performance at the UBS Arena in Belmont in New York. Eilish gave one of the best performances to her New York fans.

Opening The Show:
Eilish started the show with the song “Bury a Friend” with red lights illuminating the stage to set the mood for what was going to be an enthralling performance. All the fans in attendance were clapping along to the song until Eilish switched over to “I Didn’t Change My Number”, a sultry and eerie rendition, and moved on to “NDA”. The fans connected through these first few songs, with Eilish asking how the crowd was feeling before continuing her performance.

The next two songs, “Therefore I Am” and “idontwannabeyouanymore” allowed the multi-Grammy-winning artist to use her whole  vocal range to get everyone singing along with her. The latter is a slower song, and this gave the crowd a chance to bring their cameras out and switch on their flashlights to get fully into the moment.

Getting The Crowd Moving:
Billie Eilish was not too happy that there was not enough movement and dancing in the crowd. For her next song, “You Should See Me In a Crown”, she requested the crowd to get up and get moving and the fans obliged. She also performed “Lovely”, a song that allowed her to further showcase what she is capable of on the microphone.

Meeting The Band Members:
Eilish wanted her band members to be recognized too, and so she introduced them to the crowd. Among them were Andrew Marshall, who she described as incredible, as well as her older brother FINNEAS. All she wanted was for her fans and everyone in attendance to have fun, and she said as much before going on with her performance.
Eilish then put on smooth vocals for the performance of “Billie Bossa Nova”. With a gold backdrop and while interacting with the fans, Eilish performed “GOLDWING”. The next song on the list was “Halley’s Comet”, which featured a fantastic piano piece.

More Fan Interaction:
When switching over to “Oxytocin,” Eilish requested that fans get loud for this rendition, with those who did not want to participate deemed “not cool”.
In addition to performing the original version of “Ilomilo”, she also included an acoustic segment of the performance and then switched over to “Your Power”, which she performed with her brother. Although her brother did not come on for “Male Fantasy”, she still credited him as being one other producer on some of the projects she has worked on. She also said “Your Power” remains her favorite song.

Upping The Performance:
Billie then ran to the beach where she was lifted by a crane to finish performing “Not My Responsibility”, after which she switched to several other tunes including “OverHeated”. She also performed some of her earlier songs including “Bellyache”.
Eilish was getting fans involved throughout her performance, asking them to put their lights in the air several times throughout her performance. She then performed “Ocean Eyes” and crystalline “Bored”, which were both remarkably done.

Eilish finished the performance by doing “Everything I Wanted,” her signature song “Bad Guy,” and lastly, “Happier Than Ever”.

Billie Eilish was able to put on one of the best shows in recent memory, with everything looking set for the rest of the “Happier Than Ever: The World Tour”. Beyond her music, she was able to connect with her audience by constantly asking if they were ok and getting them involved in the performance.

It was also clear that the production was top-notch, with a lot of practice with her and her band. For upcoming artists, there was a lot to learn about playing with a band and ensuring the show goes smoothly by practicing beforehand. Upcoming artists can also do well to ensure their music is of high quality, so it resonates with their fans way before they get on a stage to perform.

For this, they would need not only good writing but production values that help them create the best music possible. A  music production studio that allows artists to harness their creativity is crucial.

Billie Eilish put on a great performance at the UBS Arena, giving her fans exactly what they expected. We cannot wait to see what she does with the rest of her tour.

Drop us a line and say hello: [email protected]