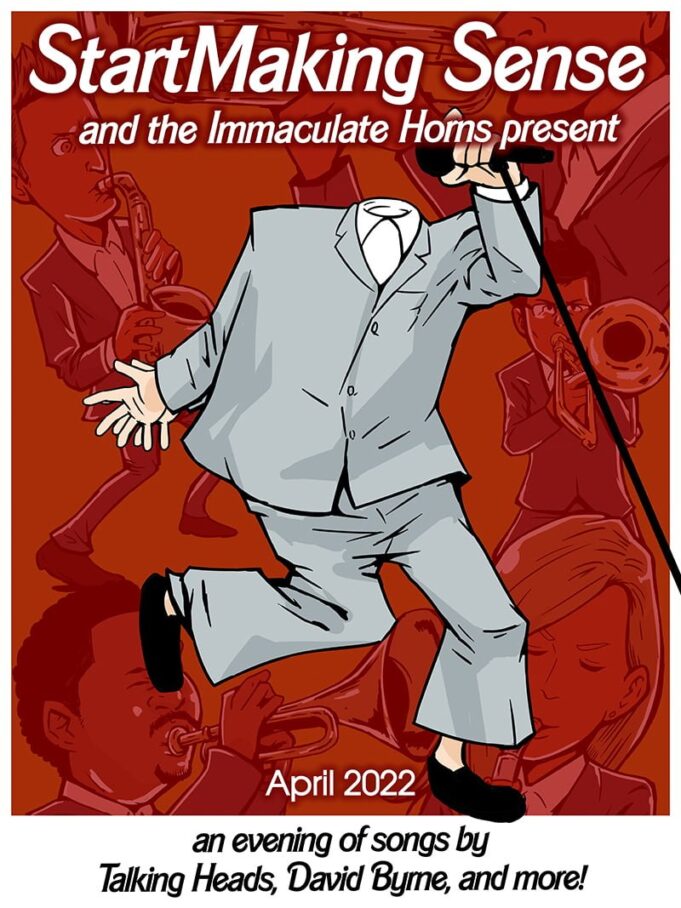 For ten years or more Start Making Sense has been a favorite at clubs and festivals throughout the United States, drawing fans every night from their Philadelphia home base to Portland Maine and Oregon, Asheville, Chicago, Denver, and beyond. They’ve become the ambassadors of the music of the Talking Heads, bringing the band that no longer performs together to both die-hard fans and new fans who are just now discovering the Talking Heads and David Byrne for the first time.

Being a tribute band paying homage to music that so many already know and love makes it a bit challenging to summon creativity, particularly with Start Making Sense paying such close attention to detail and recreation. But the band has managed to come up with live music experiences from boat cruises in New York and Boston, a fan trip to Cuba, and now they will be undertaking their most significant creative leap. The band has announced that in April of 2022 they will be touring with a horn section for the first time. Select cities will host a super version of the band, giving fans a unique show that has never been conducted before, and with no plans to recreate this particular concept on the table, these are shows not to be missed.

Does Anybody Have Any Questions? Why yes, yes we do. We’re curious about so many things from how this all came about, to how it will be arranged, to why, Why?? So we caught up with band leader Jon Braun and asked him.

Why is it called the Immaculate Horns and how did this idea come about?

Because that is what the horn section is! Immaculate – “free from flaws or mistakes; perfect.” In May of 2020 we did one of those Brady Bunch Square Zoom recordings of Start Making Sense doing “Mr Jones” by Talking Heads with a full
horn section led by Ian Gray (Corey Wong, Remember Jones, Ocean Ave Stompers). So that got the ball rolling. But even prior to that Ian and Start Making Sense had been trying to make something like this happen for literally years. Back when he was a member of Swift Technique, both bands did some shows together where the Swift Technique horn section sat in with Start Making Sense to do a couple songs. From that moment on myself and Ian had been trying to figure out a way to make something like this happen on a larger scale. With a little bit more down time in 2020 and 2021 we were actually able to put our heads together and make this a reality. We couldn’t be more excited to see it actually come to fruition.

Who is doing the arranging of the horn parts?

Was it difficult to birth this concept, given that there is not a strong horn component in the original material?

For sure. I mean some of the Talking Heads songs and a lot of the Byrne solo material already have horns involved in the arrangement. But not all of them.

So for the songs that already have horns, it may be a matter of arranging it for a smaller horn section. Or sometimes it’s the reverse. For example, maybe an original recording may have one horn and they are figuring out how to make that work with a larger section. The opposite is true for a lot of the Talking Heads songs. There may not be a lot, or any horns. But there are a lot of synth or guitar lines that we can’t always cover due to the size of our touring band.

So this undertaking allows us to grab a few elements of the songs that are sometimes missing from our live performances. We normally base a lot of our arrangements off of live versions. This gives us the ability to add in more of the studio elements, even if it’s not being covered by the exact instrument that was used in the studio. That line
will now be there.

How did you pick the venues that are on this tour?

It was a combination of two things. We wanted to do this show markets/places that we have played for a very very long time and give the audience something completely new. We always try to change up our live show as much as we can within the limits of being a Talking Heads tribute. But we felt the time was right to take a bigger step out of
that box and see if everyone would enjoy it as much as we will. We also have to be very conscious of stage size and sound system specs as this tour will be an 11 piece band. That’s a lot of people and a lot of microphones. So we had to look at venues that could handle this large of a band. Thankfully, since we had been working on this idea for quite some time, we had enough advance notice that our fearless booking agent Phil Simon, could reach out to these venues and link all of these shows together.

Who is in the horn section?

Without divulging surprises, how did you go about picking additional material? The David Byrne solo stuff is a no brainer obviously, but how was other stuff chosen?

Well, believe it or not, even the Byrne solo stuff was quite a task. Mostly because he has so much material! Ian, Matt and I had quite a few, long phone/zoom meetings where we whittled down a very large list of Byrne solo material to a more manageable size. There’s just so much amazing stuff in his solo catalogue. We were literally still debating the last few songs a week or two ago. There’s a great show of his from 1992 at the Count Basie Theatre in NJ called “Between the Teeth”. I think it was released on vhs and laser disc. Now it lives on youtube. We definitely went to that for a lot of songs, arrangements and inspiration on how to approach this. It’s a huge band, 2 percussionists, 4 pc horn section, George Porter on bass, etc etc. Just amazing.

Beyond the Byrne solo material, I’m going to leave the other material in the mystery world. We all know how far his reach is. So I will just say that it is all “Byrne Related”. Kind of like a Kevin Bacon or a Questlove DJ set kind of thing. Haha. It all ties into Talking Heads or his solo career in one way or another, even if the connection might be once removed.

Byrne took a pretty significant musical leap into many unexpected realms- is his solo music more difficult to perform?

We’re about to find out! Haha. I’m probably as much a fan of his solo material as I am of Talking Heads. So we have been slipping in more and more of his solo material into our sets over the last 4 years or so. I wouldn’t say it’s more difficult, because all great music has a level of difficulty, but it can definitely be very different from Talking Heads in a lot of ways. A lot of the songs have horn or string sections, so that requires a whole new approach for us as a live band
as we don’t always have horns or strings laying around. So the arrangements are a bit more complex and nuanced. But also, like you said, he started moving into other artistic forms or musical genres.

There’s a huge, for lack of a better word, world music, aspect to much of his solo music. Though, in this case that literally means the world. Direct Cuban, Brazilian, African musical influences with lyrics in french or Spanish over programmed drum beats with a full string quartet. He definitely started to push more boundaries with his solo
material. But at the same time he would have a song like “Buck Naked” on one of those albums, that’s just vocals, guitar and an organ. Very Talking Heads – esque. As we’ve seen recently with the American Utopia album and Broadway show, you can’t really put David Byrne in one place. Even if you do, he’ll find a way out.

Start Making Sense and the Immaculate Horns Are:

WITH THE IMMACULATE HORNS: