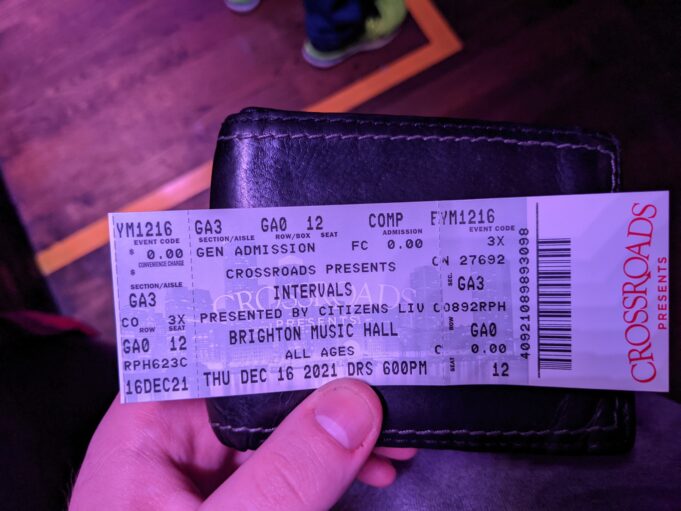 We were very excited to drive into Boston on Thursday, December 16th. This was going to be our first show since before the pandemic, and the prospect of live music was thrilling. We had never been to the Brighton Music Hall before, but we had heard good things. Entering the venue, I was greeted pleasantly by the staff who took our tickets and scanned us in. The venue is clean and modern looking, pleasantly lit and set up well for the show. The standing room floor was flanked by two bars, and merchandise could be bought from any of the four bands of the night in the back of the room past one of the bars. Caitlin and I found a good place to stand and waited for the show to start.

The first band to take the stage is Satyr, a four piece post-hardcore prog metal band from Atlanta, Georgia. They kicked off their opening set with Aesop, a song from their 2020 debut album Locus. Immediately, it was apparent what kind of set they were going to play. Sharp guitar chords from heavy vocalist Michael “Soup” Campbell lead the band into a grinding beginning as he starts off the first verse, hardcore vocals and all. The band jams through a few measures before we hear the voice of Janald Long for the first time. His voice was our favorite part of the band.

The sound mixing was a bit off for the style and the room for all of the bands that night, so it was often hard to distinguish what he was saying and separate him from the rest of the band. Listening to the album afterward, though, his vocal skill is apparent. The contrast between Lonog and Campbell’s vocals provided an excellent depth to the songs. As an energizer for the crowd, Satyr was a perfect start. They played a 30 minute set, closing out their short opening with my favorite of the five songs that they played. It had all of the progressive metal staples, from Gojira-like squealing slides, tight and heavy double bass pedal from the drummer, to a killer breakdown. This was their last night on the tour, and they said their thanks to the other bands before plugging their upcoming album, recorded in September and set to release sometime around March.

After a brief intermission to reset the stage, we got our first look at the second opener, Cryptodira. An extreme progressive metal four piece, they were a bit heavier than their predecessors. Guitar player and unclean vocalist Mike Monaco entered the stage and immediately donned a trenchcoat and Geordi LaForge-like sci fi glasses.They posed at the front of the stage before kicking it off with a grinding, muddied heavy sound. After every song, the band expressed their love of the venue and the crowd’s energy.

As the set went on, a pit formed in the middle of the crowd, showing the crowd’s increasing excitement for the music. This is the first metal show that either of us attended in a venue this small, and so both of us were a bit nervous about being close to the action for the first time. The most energetic fan in the crowd was a woman much smaller than most of the other people in the pit. Despite this, she flung herself around through the crowd with more energy than any of the rest. It really showed the energy and character of the crowd when she was quickly picked up every time she hit the floor. I knew that despite the proximity of the pit, no one was going to get seriously hurt, and the band clearly loved that energy from the crowd. They left the stage after another short 30 minute set.

At this point in the night, the house was packed, all of the stragglers having filed in for Thank You Scientist’s set. We were both very excited, and Thank You Scientist was the band we were here to see. The crowd was so excited that they cheered when the drums came out, and again when the lead singer started his sound check. I joked to Caitlin that Cryptodira was probably the last band of the night that was going to create a mosh pit. I shouldn’t have spoken so soon.

Thank You Scientist started the set off with a bang, opening with one of my favorites from their newest album, FXMLDR. The crowd moshed,  the horns blared, the guitarist arpeggiated, and the vocalist serenaded a crowd that sang along to every word. After the first song, lead singer Salvatore Marrano thanked the crowd for their energy, echoing Cryptodira’s praise of the room. According to him, the Boston show was already one of the top two or three shows of the tour. He relayed to the crowd how it had been a long tour, and they all missed their families, but that shows like last night’s were what made the end of the tour worth it. Next, they played Mr. Invisible, the top rated song off of their 2016 album Stranger Heads Prevail. It was during this song that I got to see one of the stranger sights that I have ever seen at a show, and I have been to many. This was the first time I had ever seen a crowd mosh to a saxophone solo. After this energetic performance, the band changed their minds, Boston was now their favorite show of the tour.

While Marrano’s vocals were not as on key as his studio performances, the energy of his and the rest of the band’s performance was more than enough to create a fantastic show. He mentioned between the third and fourth songs that they were all receiving monitor feedback and he couldn’t hear himself, so I’m willing to believe that it was just an unfortunate night in that respect. That said, it didn’t decrease our enjoyment of the show at all. Their final song was My Famed Disappearing Act off of their first album, touching the crowd’s emotions with lyrics about farewell. It was a good way to end, with the saxophone player switching instruments for an electric clarinet and the guitarist impressively arpeggiating on a sleek fretless guitar. Much to our disappointment, their set seemed to end too soon. They finished out their portion of the show on just their fifth song after another 30 minute set, before clearing the way for Intervals, the headliner for the night. Unsurprisingly, they left the stage with the crowd still chanting their name.

Thank You Scientist felt like the climax of the night for me, and for Caitlin as well. That said, we had both listened to Intervals in the past, and I enjoy the solo work of the guitarist, Plini. Intervals was by far the tightest band of the night. Each member of the band is highly skilled on their instrument, and they all felt very together as they played immaculately. The drum tone and sound felt better for the room, there were no vocals to be drowned out, and the light show kicked up a notch. This is the kind of show quality that you can expect from a headliner. In all, I would say that they put on a great show, even though it wasn’t our favorite part of the night. If you love mathematical progressive metal and harmonizing guitars, Intervals is the show for you.

Prog metal and the kind of music that Intervals makes can sometimes be hard to translate into a good live performance. Complex or intricate songs lacking vocal engagement are sometimes lost in translation or aren’t well suited for a concert performance, especially a standing show in a small room. Despite those obstacles, Intervals did a great job playing to the energized crowd and maintaining the excitement from the previous sets. The band members were animated and engaging.

Caitlin and I left the show satisfied with our experience and thankful to have seen such an exciting show. It was a unique experience, and I recommend both the venue and the bands to anyone who wants to see the interesting sight of a saxophone solo mosh pit.