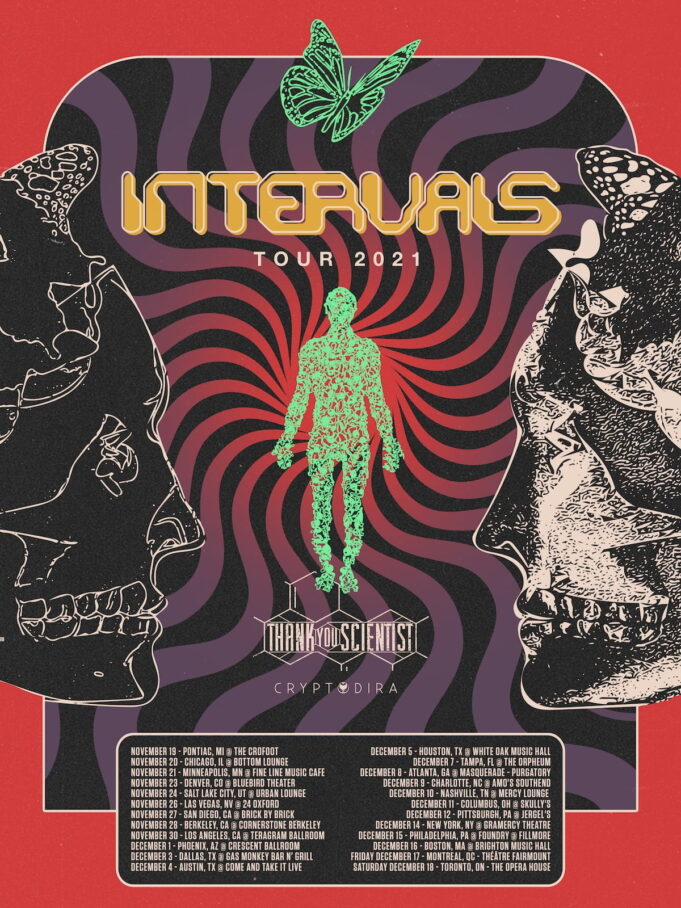 Tour dates to include support from Thank You Scientist and Cryptodira. Intervals to perform songs from Circadian live for the first time.

Through the progressive, instrumental rock project, Intervals, Aaron Marshall has long been considered an innovator. He’s built a career on trusting his instincts, even when that intuition has led him down a road that is decidedly less traveled. That may mean tearing down genre norms, finding creative ways to interact with fans, or a commitment to self-releasing music even when label opportunities are readily available to him. Marshall has bet on himself continuously, and backed that gamble up with hard work, unparalleled creativity, and an uncompromising desire to make each Intervals release a pivotal moment in the lineage of instrumental rock. On Intervals’ latest record, Circadian, Marshall continues to push the limit at every turn, resulting in arguably the most dynamic record in the band’s highly-revered catalog.

Following the release of the critically acclaimed fourth album Circadian, progressive rock innovators Intervals have announced a North American tour this fall. Kicking off November 19th in Pontiac, MI, the run will find the band performing songs from the album for the first time in a live setting. Support for the tour comes from eclectic prog-rock band Thank You Scientist and prog-metal fusion band Cryptodira. All dates are listed below and tickets can be purchased starting July 23rd at 10am local time via intervals.store.

Released in November 2020, Circadian was co-produced by Aaron Marshall – the creative force behind Intervals – and Sam Guaiana (Silverstein, Obey The Brave, Like Pacific), marking the first time the esteemed producer had ever worked on an instrumental record. It was also the first time that most of the work on an Intervals record was done locally in Toronto. As a result, Marshall had the opportunity to be more involved in the production and mixing process than ever before. Circadian is meant to be viewed as a singular piece, with obsessive attention paid to the flow of the record. It’s full of motifs, cadences, and themes that are revisited throughout the record and even recalled from previous releases. Circadian intentionally clocks in at 8 songs and roughly 40 minutes, as Marshall gave considerable thought to where the sweet spot between listener satisfaction and desire to immediately play it back was. Every minute detail surrounding the record has purpose, and builds towards an all-encompassing experience. Circadian gathered high praise from across the rock world and has seen Marshall voted as one of the 10 best prog guitarists in the world last year by MusicRadar readers.