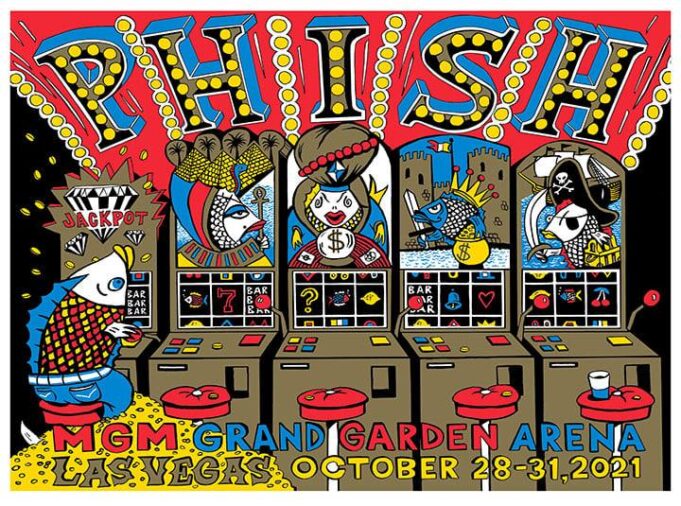 MGM in Las Vegas hosted Phish for a four night stand to end October. We have this review of October 29 2021 from the couch of Jack of the band Rubix Wheel.

Phish kicked off a second night of Magic on a four-night run in Las Vegas, and I live streamed the entire concert. I happened to live stream almost all of the summer tour, but I didn’t produce a review for them, so here goes nothin’.

The show started with Olivia’s Pool, then Axilla Part II. I thought the first song was wonderful, especially since I had not heard them play it before. Axilla was energetic and fun, and Trey even included the part where he says, “don’t shine that thing in my face man.” I’m glad they’re back to doing Part II, mainly because I think part one is a little weird.

The band was all dressed to play, and it looked like Page had lost a few pounds since summer. I will mention this has not been an easy tour for the Band. Between Covid and some tragic accidents at recent shows, Phish has had a bit of a rough road of late.

Mikes Song-I am Hydrogen-Weekapaug brought back memories of ‘90s shows I attended, and they played the suite with enthusiasm and good energy. Shade was sentimental and appropriate, and Trey sounded very sensitive as he sang it. I’ve Always Wanted it this Way was a cool song as well, and a great way to end the first set.

The band came out for the second set with a humorous vibe, and Fishman talking about Ass Handed, a rare song but a crowd favorite. Once the band started, the audience went wild. Tweezer was awesome along with a near note for note Reba, a tighter Reba than the outdoor summer shows. And of course, each song contained plenty of improvisation from the band. I think Reba was a highlight of the show for me, next to Mike’s song. Trey seemed to solo some rare Jazz licks and his fluidity on the guitar was amazing.

I also enjoyed Trey and Page listening to each other and playing off each other’s riffs. Mike and Trey did this as well during Mike’s song during the first set. It was just so good to see the band in a jovial mood that night, and it made me happy.

Sigma Oasis stood out as another highlight of the show, with Trey singing powerfully “…You’re already there.” Walk Away was rambunctious, and Julius was a Phish rarity. “Danger, I’ve been told to expect it…..” hit home.

I’ve been attending Phish shows since the ‘90s, but I felt the summer tour was one of the best yet. And the Vegas show last night was a special treat for me. If you wanna tour also, plug into LivePhish.com with a FireStick ($40 at Best Buy), and tune into some of the greatness that is happening during 2021.

Much love to the band and the Phish Community, and prayers for those who have had hard times this year. Until next time, Jack from Rubix Wheel.

I Always Wanted It This Way

Jack is an avid fan of live music, and has his own band Rubix Wheel. Check them out: