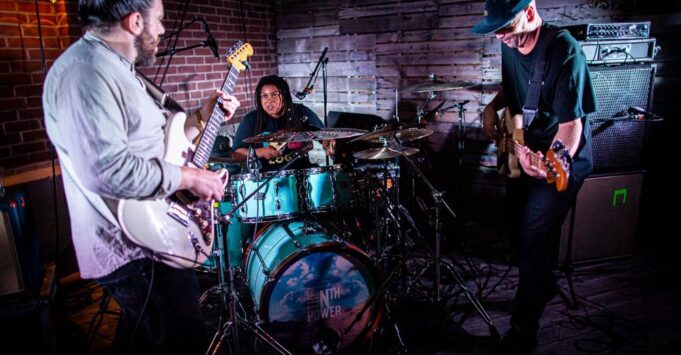 This soulful roots-rock trio drops their first studio album in six years with their most moving and inspired collection to date, which features posthumous performances by Kofi Burbridge throughout the record. Additional special guests include Maceo Parker, Ivan Neville and Nick Daniels III of Dumpstaphunk plus vocalist Cheryl Pepsii Riley.

“I reach out to you like a brother..” are the words that open the new album by the Nth Power starts. It is indeed a powerful message that they sustain throughout their latest release, Reverence. Funk, R&B, Gospel, and Jam all combine in a way that is unique to this fearless trio, and signals a willingness to plumb the depths of their musical potential. This album is the realization of that ferocious exploration and the band’s evolution.

The trio, featuring guitarist and vocalist Nick Cassarino, drummer and vocalist Nikki Glaspie and bassist Nate Edgar, have emerged from a quiet pandemic holding aloft this new music like a treasure that they have mined from dark times. Co-produced by the band with additional production from Rick St. Hilaire (Whitney Houston, Tribe Called Quest, Earth Wind and Fire) and Will Bradford (SeepeopleS, theWorst), and distributed by The Orchard, Reverence was recorded at legendary Tree Sound Studios in Atlanta and Chillhouse Studios in Boston. The album offers 11 transcendent originals that represent The Nth Power’s most profound and inspired work to date.

The Nth Power dedicates Reverence to the memory of their longtime friend and musical brother Kofi Burbridge of the Tedeschi Trucks Band, who passed away in February 2019. The Grammy-winning keyboardist blesses 10 out of 11 tracks on the album with his presence, elevating the robust new songs with some of the final musical recordings of his career.

We had the good fortune to catch up with Nick Cassarino to discuss the band’s ever evolving nature, and all that went into the creation of Reverence.

LMNR: How does Reverence compare to your last studio album, Abundance, in terms of the evolution of The Nth Power?

Nick Cassarino: This album is a natural evolution – an older, wiser, refined, more seasoned version of The Nth Power.

What do you want fans to know most about the record?

That this is some of Kofi Burbridge’s last recorded music. He blessed the keys and flute on this record and was one of the baddest of all time. We are truly blessed.

What’s the significance of the album name to you?

To have reverence for something is to deeply respect it. The album art is intentionally cosmic. We have deep respect for the universe and all of the frequencies that resonate in it.

Describe what Kofi Burbridge being on the record means to you. When did you first meet? What energy did he bring to the studio? Any memory or story with Kofi that you hold dear?

It means everything that Kofi is all over this record. One of my greatest memories was bringing Kofi to Vermont to play a steely Dan tribute at Nectar’s with us. My mom and I picked him up at the airport. The gig was with The Nth Power, Jen hartswick, Bryan McNamara and my teacher, Dave Grippo, who is from Kofi’s generation. They met years ago and shared amazing memories and stories together that day.

Explain what the Harold Robinson Foundation means to you. What specifically inspired you to write a song about/for the kids?

What inspired “l Will Never Leave You” was the band being at Camp Ubuntu and talking to the founder, Jeff Robinson. He said to us, “these kids gotta walk from their foster home through 15 heavy gang territories to and from school so any disability or orientation situation could be deadly. These kids have nothing. They are just waiting for somebody to leave them. We gotta help these fuckin’ kids man! We gotta help these kids.” So I cried and walked to the empty cafeteria where there was a piano and wrote the song.

Why is a message of hope so important to you, especially today?

Because I HOPE we don’t end up in a civil war! I HOPE we can remember how to love each other. I HOPE racism has an expiration date. I HOPE I can reach my full potential.

Since the last record you got married to your longtime love. How does she continue to inspire you and your songs about love?

She is a beacon of light and love. She is a rock with roots. She is mighty.

Also the blues song storytelling/style is fascinating in “Take My Soul” and a fun musical change-up for the band. Tell me how that song came about?

The form is based on traditional American music, the blues. It’s important to note that the vast majority of American music is black. The lyrics are about a runaway slave who gets caught. So it’s a tragic song about a tragic time in history. I wrote the song and the lyrics in about 5 minutes in 2007 or 2008. I brought it to the band and we rearranged it for us.

Why did you decide to record a reprise of “Holy Rain” and “Spirits”? Why are those songs so significant to the band?

They were some of our first ones. I wrote “Spirits” in New Orleans for us around our first sessions in 2012. It’s the first song on our first EP [Basic Minimum Skills Test] and we have played various remixes and rearrangements of it over the years – so it has a kind of ‘theme song’ quality to us. “Holy Rain” I wrote in 2005 In Burlington, Vermont and brought to the band when we were first formed and rewrote the lyrics for us. It’s a sad song about a soldier who goes to war.

Fill me in a little more on your musical background, influence of the church and gospel, etc. Do you come from a music family? How old were you when you started writing your first songs?

My parents play music and had a local bar band, local wedding band and a duo project. They led the folk music group at our Catholic Church and brought in gospel music there. I started playing punk-rock bass when I was 10, then guitar at 12 and started writing my own songs during that time. By 13-14 it was Dave Matthews, 15-19 jazz, 20-22 I moved to New York and played a lot of gospel and hip hop, then 23-present realized that all of these genres were part of a oneness. The best parts of all these musics were the same part – the feeling it gives the listener.

What guitarists are your greatest influences? Did you have a mentor or just pick it up naturally?

Wes Montgomery, Hendrix, Pat Metheney – I really like Coltrane and Bach and Charlie Parker and Miles Davis too, but they aren’t guitar players. I had a local guitar teacher, Paul Asbell, who taught me jazz in Vermont. My father taught me rock and roll.

Both musically and lyrically, Reverence presents a full-circle evolution in the trio’s distinctive sound, which taps into an energy that is often both sensual and spiritual, infusing high doses of rock, soul, funk, reggae, gospel and rhythm and blues. The new songs spread a deep message of hope, empathy, gratitude, self-forgiveness and, above all, attest to the universal power of love.

The Nth Power Tour Dates: Fall Back In Love Tour