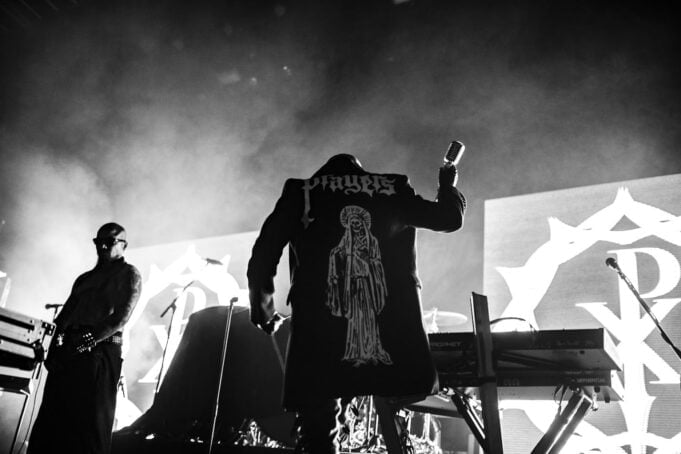 Prayers performed on September 30 2021 at the Belasco in Los Angeles. Review by Harriet Kaplan with Photos by Ricardo Curiel.

You have to give Prayers credit for their confidence but also their humility. Lead singer/founder Rafael (alter ego Leafar Seyer) spoke to the audience and of their loyalty to their fan base, also his disdain for poseurs and fakes in the music industry and his love for his wife Kat Von D that headlined the show and describing not feeling so alone in the world anymore because he found the love of his life.

The electronic rock band held court at the Belasco Theater in Downtown Los Angeles delivered a defiant and bold set of music they describe as “Cholo Goth” basically creating their genre of music. The near-capacity crowd was drawn to their music and sang along, also pumped their fists in unison in the air to songs they knew.

The lead singer of Prayers is Leafar Seyer. The DJ is Dave Parley. Lending a solitary and ominous presence merely standing on the stage was Mr Chino.

Prayers songs explore the grim and dark realities of gang and street life. This all done utilizing pulsating beats and swirling synthesizer lines. Prayers take their stylistic cues from Christian Death, Depeche Mode, Bauhaus, Pet Shop Boys, Xmal Deutschland and other Gothic rock and dark 80s music. Another important influence and imprint as well as was from co-founder/keyboardist Rafael Reyes’ life as gang member in the Sherman Grant Hill Park 27 gang, which is considered one of San Diego’s oldest gangs, also known as Sherman 27.

When he was a teenager, Reyes was jumped into the gang. The Prayers’ lyrics as well as their image helps to break down stereotypes within the Goth and Cholo subcultures. They have released three albums: SD Killwave, Young Gods and Baptist of The Thieves. Singles and EPs include Gothic Summer, Black Leather and Cursed Be Thy Blessing.

Prayers was a fitting opener for Kat Von D. They have a strong and well-defined image and their autobiographical songs are direct and to the point come from a place of true life experiences. This all lends itself to the band’s authenticity and believe-ability. Though Prayers music may not be for everyone or their rough stance and demeanor, they clearly have a big following and loyal and supportive fan base embrace them passionately and whole-heartedly.