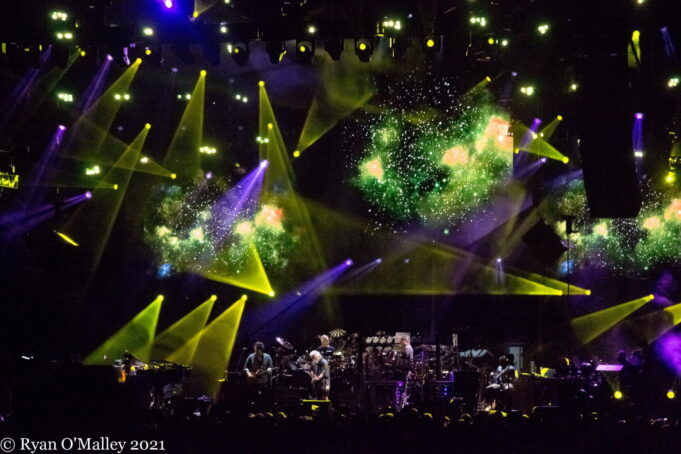 As part of its ongoing Summer Tour, Grateful Dead offshoot band Dead and Company made its debut to a near-capacity crowd at Hershey Park Stadium in Hershey, Pa. on Saturday, August 28. And although the band missed a perfect opportunity to deliver the old Grateful Dead chestnut “Candyman” – in the “sweetest place on earth” – it did bring some tour debuts to the iconic stadium.

Kicking off the proceedings right around the usual start time of 7:15, guitarist Bob Weir fronted the outfit for the tour debut of one of his signature tunes, “The Music Never Stopped.” As he has done for most of the current tour, lead guitarist John Mayer provided solid fills throughout the song and handled the vocals normally sung by former Grateful Dead vocalist Donna Jean Godchaux on older recordings and live bootlegs. Another Weir penned number, the bluesy “Easy Answers” followed, marking its tour debut as well. The song, only performed by the Grateful Dead in the early 90’s, may be overlooked by some, but was a welcomed addition to the first set in Hershey on Saturday.

Rather than finding itself in its normal spot of being the encore, the Dead’s biggest charting hit, “Touch of Gray,” was a slower but fun cut to sing along to, with Weir and Mayer trading off verses throughout. With Weir back at the helm, the band had a slower start to the Grateful Dead classic “Tennessee Jed,” before picking up steam with some fiery interplay between Mayer and keyboardist Jeff Chimenti which culminated in one of Mayer’s best solos of the evening. Other first set highlights included Mayer leading the group through a brilliant cover of the Ron “Pigpen” McKernan blues classic “Mr. Charlie,” an extended take on the early-era Weir nugget “Cassidy,” and the upbeat set closer “Don’t Ease Me In,” which was one of Mayer’s most energetic performances of the evening.

With the threat of possible severe rain earlier in the day, and with the sun having gone down during set break, it was somewhat ironic that the second set would open with the Dead classic “Here Comes Sunshine.” While the song did have a deep explorative jam in the middle courtesy of Mayer and Chimenti, the segue back into the final chorus seemed a bit rushed but was held together by the rhythm devils team of drummers Bill Kreutzmann and Mickey Hart and bassist Oteil Burbridge. A classic live Grateful Dead two-shot of “Estimated Prophet,” and “Eyes of the World” were served up next, with “Eyes” almost pushing the 20 minute mark. Throughout both, Chimenti’s keyboard playing took center stage, with a spotlight during the jam in “Estimated Prophet,” and some tight fills during the opening of “Eyes” which was at a much faster pace than many of the earlier selections.

If there is one Grateful Dead song that Mayer is always associated with, it would be “Althea,” a sometimes forgotten gem sung by Jerry Garcia throughout the Dead’s career. The song – which was performed passionately by Mayer at Hershey – might also be considered the beginning of Dead and Company as Mayer was filling in as guest host for “The Late Late Show” in 2015 and with Weir as a guest, the two were joined by drummer Jim Keltner and bassist Sean Hurley for renditions of “Truckin’” and “Althea.” Since that television performance, every time the song is played live, Mayer garnishes massive approval from Deadheads who know that if it weren’t for that night on late night TV, the Dead’s music in 2021 might be very different.

A cornerstone of all Grateful Dead and Dead and Company shows followed with Kreutzmann and Hart charging into their beloved “Drums” solo. The version in Hershey may have been the most tribal of the tour with both drummers utilizing nearly every drum on their massive kits before Hart went over to his psychedelic beam which provides sounds that could best be described as those of a finely tuned theremin. The instrument marked the transition into the inevitable “Space” which finds the other band members returning to the stage for an improvisational jam. Halfway through the Hershey jam, Chimenti started teasing a four-chord progression that eventually morphed into an on-the-fly rendition of the Miles Davis standard, “Milestones.” While it is extremely rare for Dead and Company to perform the composition, it’s a familiar number for Weir and Chimenti as both were members of Weir’s project, RatDog, who performed “Milestones” many times throughout the years.

“Going Down the Road Feeling Bad,” an old cover song dating back to the Dead’s early days, got the crowd back on their feet and dancing and also featured another rare occurrence during a Dead and Company show – a lead vocal by Chimenti for one of the verses. “Death Don’t Have No Mercy,” a haunting number penned by the Reverend Gary Davis, found Weir delivering his strongest vocal performance of the evening leading up to the song’s crescendo. After the obligatory “One More Saturday Night,” the band stayed on stage with Weir explaining that due to a hard 11p.m. venue curfew, the band would be going directly into its encore of Bob Dylan’s “Quinn The Eskimo,” which was the final tour debut of the evening.

With this tour still having a handful of dates left on the East Coast, there are still chances to catch Dead and Company on its summer tour. The shows on this tour have been getting praise from both fans and the press, and if Hershey’s stop was any indication, they will only continue getting better.