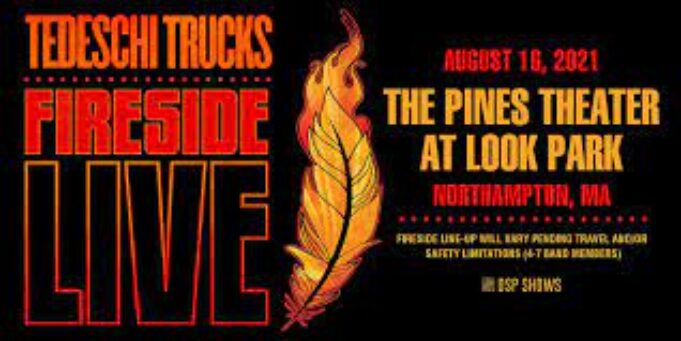 Heck we needed that- and by we I mean my wife and I, Northampton proper, Massachusetts in general, and overall the live music audience.

Tedeschi Trucks band brought their Fireside Live tour to the Theater in the Pines at Look Park in Florence MA. I could feel the excitment building as I watched the local music community wake up and seek out tickets for this show which sold out in advance.

We waded through about five minutes of neighborhood traffic, paid a very reasonable parking fee, and meandered our way through the picturesque park and found a spot. People were hanging out but quickly were getting their acts together and taking the stroll to the front gate. The wait there wasn’t too long either, and we managed to get to will call and get inside in a few minutes.

At my current age, I’m the kinda guy that eats at a certain hour, and I was ready as we got into the gates to satisfy that, and the show wasn’t scheduled to start for an hour anyway. So we wandered into the food vending area, which was a series of food trucks set up in a little grove- we skipped the Local Burger line, which we know to be awesome but the wait looked serious. We went to a Vietnamese food truck called Little Truc, got food after a very short wait, and wandered into the Pines to take our place.

Good food being consumed, we settled in and I scouted a place for my audio recording. The general admission theater was filling up quickly, with the majority of the gently sloping lawn taken up by chairs and blankets. There was also an ample general admission standing room only section in front where chairs and blankets are not allowed. I found a hedge toward the back to stash my recorder and we watched as pretty much any available space in the joint was filled.

Tedeschi Trucks Band took the stage pretty much right on schedule, six people firing up on all cylinders pretty much immediately. They opened with a suite of songs, three rapid fire blues rock songs which showcased everything to love about this band right from the jump.

While I didn’t know the individual songs, as it is my first Tedeschi Trucks Band show, I know the music and the vibe- honest and straight forward progressive blues, with the one two punch of amazing vocals by Susan Tedeschi and transcendent guitar work by the modern master of slide and in your face blues, Derek Trucks. The band is filled out nicely along them with drummer Tyler Greenwell, bass player Brandon Boone, and keyboard player Gabe Dixon creating a super tight rhythm section. Vocalist, songwriter and occasional acoustic guitar player lends his skills and flavor to the mix, Mike Mattison.

The first set progressed rapid fire, with one song after another executed with skill and precision. Set one closed after fifty one quick minutes with a lengthy take on the song Idle Wind, twelve minutes strong. The compact set felt both quick, but also fully executed, with moments of stretching, honor paid to the songs, and delivering exactly what the crowd wanted.

During the set break, the light was starting to dwindle and I wandered back to the hedge to check my recorder which was functioning perfectly it would seem. I met Dave who told me that he spent nearly an hour in the food line but could here the music. Looking over the hedge it seemed as if the beer line was likely an hour long too, but everyone was in good spirits, nobody really complained about anything as the crew handled everything on stage and through the Pines well. The show was sold out, and there was probably with the extras, nearly twenty five hundred people inside. It was definitely busy, but not claustrophobia inducing.

The break wasn’t long and they fired into the second set. The first two songs were more of the perfectly executed blues rock of the first set (Drift Away and Part of Me). The set and vibe changed when they fired into Bell Bottom Blues by Derek and the Dominoes. The band is in perfect lockstep with perfect execution of the song, harmony vocals and all. Next up was another D&theDs classic Why Does Love Got to be So Sad? Now I’ve been watching as TTB has been releasing songs from that epic show at Lock’n where they covered the whole Layla album, along with special guest Trey Anastasio.

Somewhere during these two songs it occured to me- DUH! Derek and the Dominoes, Eric Clapton and of course Duane Allman! There is no better band to be playhing this material than Tedeschi Trucks Band, and they certainly illustrated it this night.

So all of the comparisons are apt. Yes, they have an Allman Brothers feel, but not because they sound exactly like the Allman Brothers but because they learned those lessons, and have been to the places musically that ABB have been. Derek in particular has that vibe, he doesn’t sound necessarily like Duane overly (sure he does sound like Duane), but because he’s learned the lessons of being in that position- how to excel at the slide guitar, how to lead a band from a lead guitar position, how to stand and wow a large audience.

The same is true of Susan Tedeschi. So I would estimate that anyone who has heard both Bonnie Raitt and Susan Tedeschi would remark at the obvious comparison. And she does have a very similar vocal tone- but to stop there would be truly a miscarriage on the immense talent that is Susan Tedeschi. It may be more apt to compare Tedeschi to Aretha Franklin or Jennifer Hudson. Her vocal prowess is stunning. Sure, it drips with the blues- but her ability to go from belting to crooning to sheer vocal dexterity is enough to amaze me. And unlike Raitt, and this isn’t a bust on Bonnie at all, Tedeschi is truly fronting a band. She’s not just showing off vocally, she carries the band through the songs and is the main engine for them beyond question.

So when she set down her guitar and went up to the mic to strike the lead singer pose, I was elated. The band played Shame and Susan unfolded a textured and nuanced vocal performance that was dynamic and truly awe inspiring. She spent some time bathing in and manipulating the vocal delay and flirted with a psychedelic vocal in a way she hadn’t earlier in the show. It reminded me of the abilities and spell binding quality of Robert Cray- like with Susan we know that Robert is a stunningly good guitar player- but both thoroughly surprised me with their incredible vocal power and dexterity. Susan is at the top of her game, and should be at the top of any list of highest quality singers in blues, rock, or really any style. I was flabberghasted by her performance.

Up next the band fired into Midnight in Harlem, a song penned by Mike Mathis and if there is an original song by TTB that is known by casual fans or those who know the band less, it is this one. It was delivered with the emotion and quality that I’ve come to understand is the hallmark of this great band.

This song helps me to understand that this band’s influences go far beyond the Brothers Allman, and beyond their influences. There is a very strong Jon Sebastian (Lovin Spoonful) vibe to their music, which goes beyond their well known cover of his Darling Be Home Soon. There is a quality to the song writing and execution that recalls masters of rock and folk and just great song writing that exceeds genre. A great song is a great song, and Tedeschi Trucks Band is filled with them. The first song of the encore, Bob Dylan’s Don’t Think Twice It’s Alright is another perfect example of the band’s influence and ability to take a song to new places and new heights with their orchestration and arrangement.

Run, don’t walk- to the next available Tedeschi Trucks Band show. I will be hard pressed to miss anything I can see with Susan Tedeschi in it, honestly. Derek is the best partner for her I can imagine, and seeing them duel on guitar, as they did in the set ender I Want More, is truly special. The jams on their back porch must be a sight to behold.

To rate this show anything less than perfect is impossible. This is exactly what we needed, to have a show that is transcendent, in a group of people who were also ascending into musical nirvana. Well done.

When Will I Begin
Don’t Know What It Means
Do I Look Worried
Gin House Blues
(Bessie Smith cover)
Made Up Mind
Just Won’t Burn
(Susan Tedeschi song)
Whiskey Legs
Idle Wind
Don’t Drift Away
Part of Me
Bell Bottom Blues
(Derek and the Dominos cover)
Why Does Love Got to Be So Sad?
(Derek and the Dominos cover)
Life Is Crazy
(Mike Mattison cover)
Just as Strange
Shame
Midnight in Harlem
I Want More
Encore:
Don’t Think Twice, It’s All Right
(Bob Dylan cover)
The Feeling Music Brings
(Susan Tedeschi song)