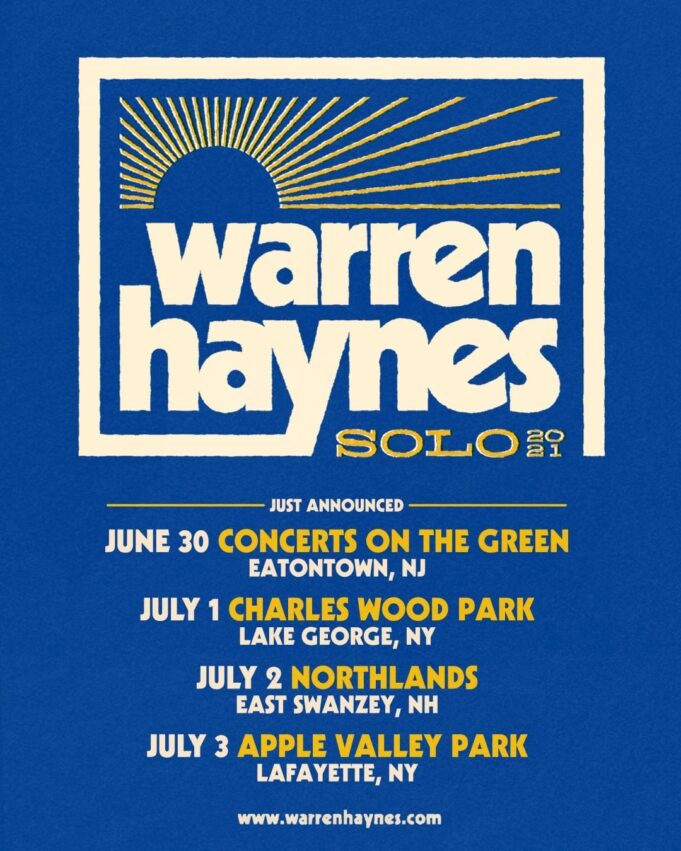 General On Sale Begins June 11th at 10am ET Also Appearing at Peach Music Festival and The Ride Festival.

Fresh off his appearance at this year’s Love Rocks NYC annual benefit concert at the Beacon Theatre, GRAMMY Award-winning vocalist, songwriter, producer, revered guitarist, and Gov’t Mule front man Warren Haynes has announced four brand new solo shows, which will kick off on June 30th in New Jersey and also stop in New Hampshire and New York. General on sale begins this Friday, June 11th at 10am ET. Each show will adhere to local regulations as pertains to seating, capacity and overall public health safety protocols. On July 4th, Haynes will perform at the Peach Music Festival in Scranton, PA and then wrap his string of dates with back-to-back performances at The Ride Festival in Telluride, CO on July 9th and 10th. Full routing below. For more details, please visit www.warrenhaynes.net.

The new run of dates comes on the heels of the recently announced return of Island Exodus 12, which will make its way to Jewel Paradise Cove Resort in Runaway Bay, Jamaica from January 16-20, 2022. The ultimate “concert-cation” experience featuring epic, intimate beachfront concerts will be hosted by Warren Haynes, offering his unique, interactive “Q and Play” set, a hybrid concert performance and storytelling session, and Gov’t Mule, who will perform three full two-set shows. Also scheduled are Dawes and The War and Treaty, who will perform multiple sets, and special guest Ron Holloway, who will present an extended afternoon “Sax On The Beach” set. Attendees who arrive early for Exodus Eve on January 15th will see “RoHo” part of Melvin Seals & JGB + Ron Holloway’s “Legion of Melvin” show. Tickets are on sale now, for more details please visit islandexodus.com.

In recent months, Gov’t Mule delivered three streaming-only albums via Evil Teen Records including Live At The Cotton Club, which features the band’s original line-up and was recorded in Georgia where the band was formed, Live At The Angel Orensanz Center, recorded during the second of back-to-back shows as part of their New Year’s run in 2008, and Live At The Beacon Theatre, recorded on New Year’s Eve 2017 when the band rang in the new year with special guest Jackie Greene as part of their annual New York City residency.