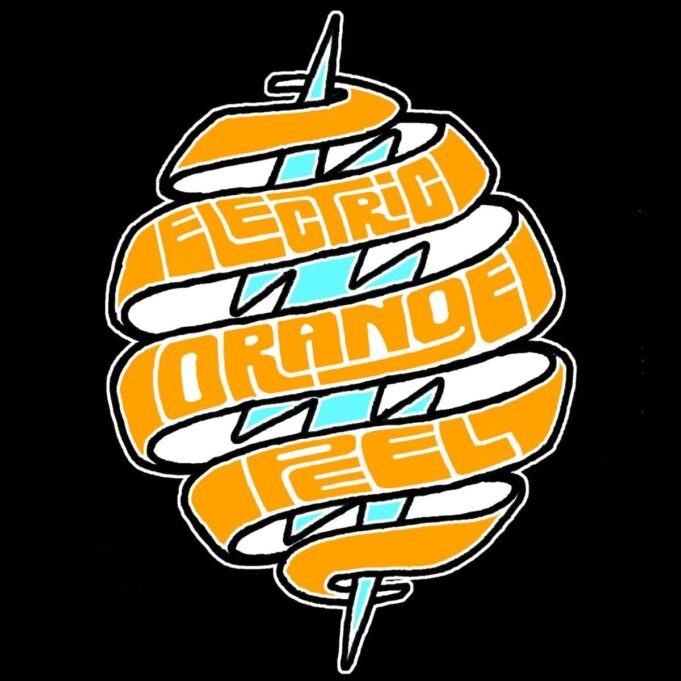 by Jack O’Handley of Rubix Wheel–

It was a rainy, misty day here in Columbus, OH.  It was Wednesday and the rain had slowed to a sprinkle by the time I rolled out of Hilliard to my old stomping ground, Woodlands Tavern.  Driving along Riverside, I noticed this time, the Grim Reaper stayed out of view.  I had seen him swoop in before, but not this time Satan, not this time.  It happened to be the first day of “lifted restrictions” on the mask mandate and social distancing in Ohio.  It was also the first time I had been to a concert in over a year.  I zoomed into Grandview, knowing the World was a different place since the last time I had been here, many moons ago.  I was lucky enough to find a parking spot for my little car, and I wandered into the venue to see my old buddies play.

Electric Orange Peel graduated from Ohio State University in 2012, and they began their journey at Ruby Tuesday Live, a venue as old as Time, located on the Ohio State University campus.  They packed it with all their old college buddies, so the venue always asked them back.  My band, Rubix Wheel, did a two night run with them in 2014, at Dayton and Columbus, during our Fall Tour.  Peel went on to play Summer Camp(IL), MI, CO, NY, etc, doing all their own booking and management.  These guys are super smart and all four graduated with very difficult degrees.

The show opened with some originals off their 2017 jam album, “Seed,” available on all digital outlets.  I recognized the songs since I had downloaded them on Apple Music a month or two ago.  They brought out other songs as well, which have not been released yet.  The crowd was there, and they were dancing to the original music.  The band was super tight, with a new drummer who was spot on.  The vibe was good energy, and I hung out during set break and made a new friend, Zack.

The crowd was chill.  Austin, the Guitarist/Singer, looked a little tired from playing the Crest the night before, but I could tell he was in heaven on stage that night.  Each song had peaks and valleys, decrescendo and crescendo.  But this wasn’t a 90s Jam Band, this was a modern day anomaly, a band that had synthesized it’s sound in a lab somewhere, and practiced so much that they were “tighter than a tick’s ass.”  Nate looked like a lumberjack, somewhere between Paul Bunyon and a rural Wisconsin man, as he held down the low end.

Austin and Marco looked like Muppets, animated and full of smiles and head bobs.  The drummer looked like he could drive the van, and he was just as alert as the rest of the band.

So after years of brewing the ‘Peel, this is what the show was like.  Exciting, heavy, mellow, bluegrass, jam, eclectic, euphoric, and worth the 10 bucks at the door.  The highlight for me was 1999 by Prince, probably the only cover played all night.  Marco stood up and patched in the cheesy keyboard riff, as Austin and Nate exchanged vocals on the hit song from the 80s.  It got me dancing, and it was the second set.  The crowd really got into it, and the song “Grow a Brain” came along, as well.  The band really knew how to work a crowd, and where to fit songs.

I see a bright future for Electric Orange Peel.  They really deliver the goods when it comes to carnival entertainment jambands.  The crowd loved it, and the band was well rehearsed.  May God always keep them safe on the road, and may they always have the best of times, free from worries and trouble.

From Columbus 4 years ago: