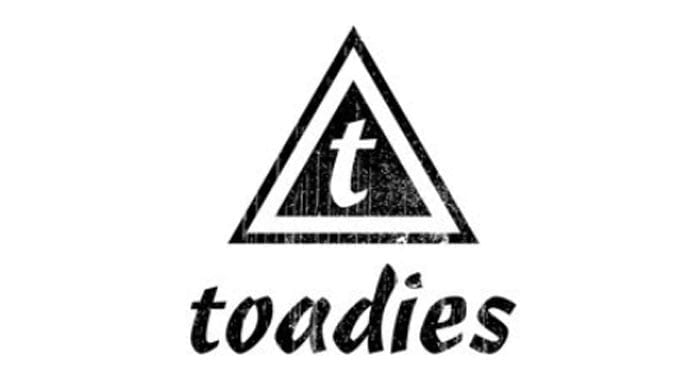 June 7, 2021 – Ft. Worth, TX: Toadies will hit the road this fall to mark the 25th anniversary of their platinum-selling debut Rubberneck. Technically it is the set’s 27th anniversary, but who’s counting?

Covid cancelled all the band’s tour dates and the Rubberneck 25th anniversary run will be the first Toadies shows played since December 2019.

Toadies guitarist Clark Vogeler looks forward to touring again as live music starts opening the doors post pandemic : “I recall seeing the White Stripes play live five days after 9/11 and it was one of the most cathartic music experiences I’ve had. It was simply healing to see live loud Rock and Roll after such a troubling week. I imagine it will be a similar experience for music fans to get out again and see their favorite bands live, just as it will be for me when I get to see my faves again. As much as anything though, I miss playing music with these three guys and can’t wait to do it again so I’m really looking forward to the tour.”
Bassist Doni Blair adds “Its scary, exciting and don’t forget… scary but someone has to go out and show people that, because vaccines work, things might be able to go back to some sort of normalcy.”

To properly celebrate Rubberneck’s 25th anniversary Toadies will be playing the album from start to finish. Front man Vaden Todd Lewis talks about the album’s longevity saying “I’ve said it a hundred times, but when we made this record I never expected anything like the reception it received, and am always blown away by the way the fans have kept it going” he adds ” I can’t wait to get back out there and get loud again! Although I also have a bit of trepidation built in from being isolated for so long. The guys are all itching to get back out on the road after not playing together for so long.”

Fellow Texans, Reverend Horton Heat are on all dates and will play their Al Jourgensen produced Liquor in the Front in it’s entirety. Formed by Mike Wiebe and Rob Marchant of the Riverboat Gamblers and Zach Blair of Rise Against, Drakulas support the first leg of the tour. LA based psychedelic rockers Frankie and the Witch Fingers support West Coast dates, while 90’s cowpunks Nashville Pussy support the tour’s last leg.

Earlier this year, Toadies partnered with Dallas coffee roaster Full City Rooster once again to release a new coffee Dark Secret. (The band previously worked with the company on their Toadies Texas Pecan Coffee in 2019) Bassist Doni Blair says “After the success of our collaboration with Full City Rooster on the Toadies Pecan Coffee we wanted to go simpler on the next roast. We wanted to let Michael from Full City Rooster roasting skills and talents shine through and decided on an amazing Ethiopian dark roast that we are calling ‘Dark Secrets’. No fanfare with packaging, we’re letting the coffee speak for itself. But just in case we decided to wrap it in ninja black.” Full City Roosters Michael Wyatt adds “Full City Rooster (est. 2013) always starts with the finest single origin coffees from micro-lot growers and socially responsible farms in the best coffee growing regions of the world. From there, we work hard to roast carefully to make individual qualities sing from each coffee origin. ‘Dark Secret”’ is a collaboration with The Toadies—a dark roast of the finest beans from around the world. Dark Secret goes beyond smoky and intense not unlike the band itself.”

The coffee is available via mailorder.  They also released a mask with a portion of each sale benefitting Music Cares. Buy here.

Fueled by all that coffee, Toadies singer Vaden Todd Lewis has recently released the first two in series of lyric comics in a collaboration with illustrator Lee Davis. Vaden says “I’ve always wanted to see the stories behind our songs realized in a visual/printed format. Its very exciting and fulfilling to see these characters come to life. Lee’s illustrations really bring out the macabre dark humor that’s been a big part of my writing style my whole career.”
Davis comments  “When I heard Toadies on the radio or MTV I enjoyed their infectious music, and the line “Do you wanna die?” is one of those moments that was imprinted on my mind and years later sounded just as clear in my head as the first time I heard it. So it was surreal when I got word that my illustration work was desired by the band for a comic run. It was and is a thrill and an honor to take on this task. The lyrics proved uniquely ambiguous, as I discovered a truly unsuspected vision behind the words: I’d started reading the script expecting to go outside of my love for the weird and horrific to explore a tamer realm, yet suddenly I realized just how bloody and gleefully bizarre this vision of Vaden’s really was.”

Toadies have more than 25 years, countless shows and seven studio albums behind them. They have played Lollapalooza, ACL, graced the cover of Marvel Comics, released five signature beers with Martin House Brewing, a signature coffee with Full City Rooster, have had a “Toadies Day” declared by their hometown of Fort Worth and have hosted ten Dia De Los Toadies, their festival that launched in 2008 honoring Texas musicians and beyond. The platinum-selling Rubberneck spawned the hit singles ‘Tyler’ and ‘Possum Kingdom’ and reached #1 on Billboard’s Heatseakers chart and spent 49 weeks on Billboard’s Top 200 chart. The band broke up shortly after the release of the follow up full length Hell Below/Stars Above. A one-off gig in 2006 become a full-fledged reunion with their devoted following growing stronger each year since.

Toadies encourage everyone to wear a mask and be safe.