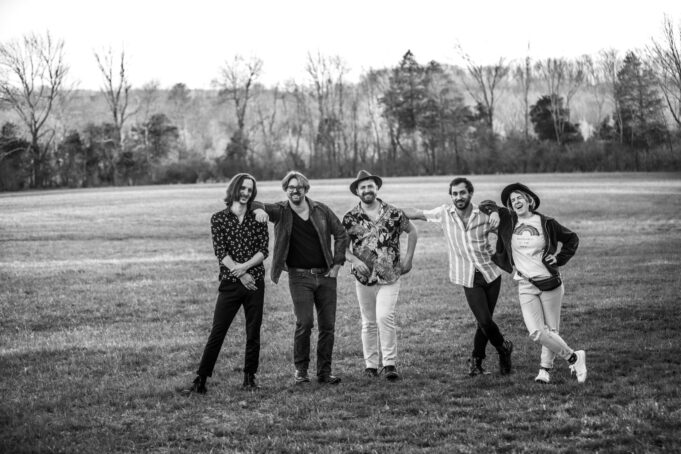 by Andrea Flohn with photos by Karl McWherter

Live music has returned across the nation and is most likely on the forefront of all of our minds as we approach the summer festival season. Philadelphia, along with New York City, has been one of the least lenient cities throughout quarantine; restricting access to even outdoor live music events. Despite their slow crawl towards normalcy, Philadelphia area venues have reopened their doors to the public.

The city’s own retro pop/rock group, Chestnut Grove is set to perform on May 27th at the famed Ardmore Music Hall following the release of their brand-new album titled The Album on May 21, 2021. Fused together in friendship by their high school days, the members of Chestnut Grove explore the joys and sorrows of leaving your twenties behind in this new album. Last week, Live Music News & Review caught up with Dee Gerhart and James Daniels from Chestnut Grove to discuss some of the challenges in creating The Album and the road to Ardmore Music Hall.

LMNR: You mentioned that your producer Derek helped you to sort of reinvent the songs you had all been playing together for years. In what specific areas were the songs reinvented and what did that process feel like for you guys?

JD: We went into the studio with an open mind and we were ready to learn from Derek Chafin our producer. Playing since High School together has definitely helped us be a tight band, but we really needed to learn how to execute in the studio. Reworking songs like Newspaper Hats, Funk Yeah and No Love definitely was new to us. Some of the tweaks were small and some almost completely changed the tune.

DG: He helped rearrange parts, get rid of pieces, and even rewrite sections in songs, in the way that someone listening and not performing the song can pick apart. He is a musician himself, so we trusted his ear. Sometimes as the creator, I can overthink and complicate what could be simple.  We have been writing and playing so long, that it’s nice to have a different writer chime in. It’s refreshing.

LMNR: Dee, you said that you were particularly challenged by the album’s final song, “Empty”. Could you speak a little more on what this song means to you and why it was so important to include it on the album?

DG: When I wrote “Empty.” I was feeling exactly that. Empty. Derek really helped with this song because there wasn’t a chorus written at the time, we brought it to the studio. Just the verses, and bridge section; “quitters never really win, so who really loses in the end, not me”. While we were working on it, he asked if something more could be added, without taking away from what was already there, because he loved that too. So, I took it home that night, sat down and let a counter melody form itself, first as a hum, then adding the rest. The word empty was always the drive of the song, so I knew it had to be incorporated in the chorus lyrics. My mom really liked the movie Galaxy Quest, and she used to quote that line “Never Give Up, Never Surrender”. So, this is sort of my version of that saying. Even though you may feel lost and empty, don’t quit. This song had to make this album because it was the best song I’ve felt I’ve written thus far. It was ready to be shared. I felt good enough as a musician and vocalist to finally give it some justice, and I trust my fellow bandmates to help me make good choices in the songwriting and production of it.

LMNR: James, what aspects were most challenging for you in creating The Album?

JD: I am stubborn, and Derek wanted me to change a lyric in “No Love”. The lyric changed the entire meaning of the song. I was never told what to say I was just prompted to write something different. I am glad I was pushed to do it. The song is better because of it.

LMNR: Would you say that quarantine has hindered or helped what you’re trying to accomplish as a band?

JD: Both, we got much better as musicians. It was nice to be able to just practice rudiments and fundamentals. However, it was difficult not being able to tour and grow our audience.

DG: Oddly, a little bit of both. It gave us a chance to get much better as musicians, friends, probably people in general, because all we had was time. But we were just about to release The Album with a tour to follow that spring/summer, and then everything shut down. So, we were left very antsy and anxious to get back out there. I’m still feeling that way. I’m ready to be back better than ever.

LMNR: How does it feel to be playing at The Ardmore Music Hall post-pandemic?

JD: It feels amazing, It’s like starting over almost. It’s been really long since we have played a real show. Hopefully I am not too nervous.

DG: First of all, it is a gigantic opportunity for us, and I’m still shocked it’s happening especially with The Album release timing as well. So, thank you everyone who has made this happen. I feel blessed. Second, I can’t wait to see all the work they’ve put into it. We had the honor of playing there a few times, pre-pandemic, so it’s going to be awesome to see the fresh look. I’ve seen dozens of shows at Ardmore and it’s always my favorite local spot. And lastly, I really hope everyone who attends or is working, is ready for some serious energy. We have been pent up, for far too long!