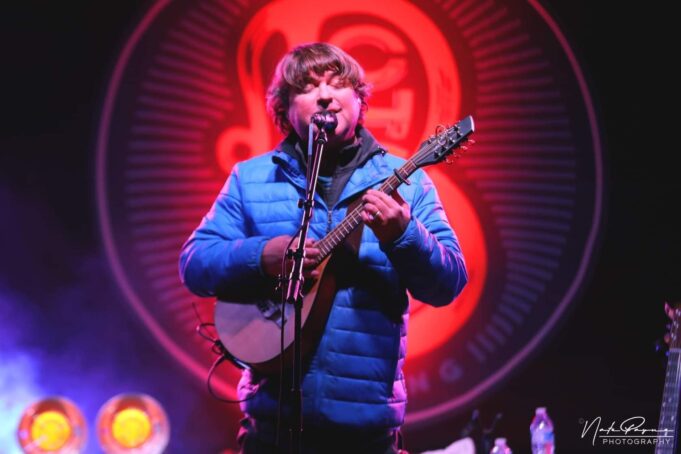 Keller & The Keels B Chord Brewing Company in Round Hill, VA April 2 2021 Photos by Nate Payne by Andrea F. Flohn

The highly talented Keller Williams was joined by Larry and Jenny Keel for a good old-fashioned hoedown at B Chord Brewing Company in Round Hill Virginia on April 2, 2021. The following night, Keller opened with a full solo set which was followed by a full set with the ever-splendid Grateful Gospel and John Kadlecik on lead guitar. Andrea Flohn was at the show to deliver the details.

It’s been over a year since live music venues closed their doors to the public, and about six months since our return to B Chord for a live music event. Last October we attended two nights of Railroad Earth at the brewery and were highly satisfied by our experience so when we heard that Keller Williams would be the first act offered by the venue in 2021, we jumped at our chance to return for more of the magic.

Keller has been one of the more active musicians within the jam scene since the beginning of the pandemic. Shortly after large live music events had been officially postponed or canceled for 2020, Keller began performing in the basement of his Virginia home twice a week using the livestream platform, StageIt. Viewers are charged five bucks to watch an episode of the livestream-dubbed Keller’s Cellar-and for 80 minutes they enjoy a throng of Keller originals, Dead covers, and a great mix of alternative and country tunes as well.

Along with noodling around on his skateboard with a guitar in his hands, Keller has also welcomed Larry and Jenny Keel for a show in his cellar and has also used the space to put on a benefit show for the SPCA of Fredericksburg on Facebook. At this point, Keller has put on 64 Keller’s Cellar shows and doesn’t seem bent on quitting any time soon. However, his performances have dwindled from twice a week to now only once a week. It isn’t any wonder that live musicians simply want to play for a live audience again, and Keller is no exception.

We arrived at B Chord on Friday at around 5 pm for a 6 o’clock showtime. As we pulled into the long gravel driveway leading to the quaint brewery and 20-acre farm we noticed that the first parking lot had already filled up with eager beavers looking to snag a picnic table near the front of the stage. We parked in a bumpy field behind the brewery and watched as other folks filed in, parked and beelined along the left side of the stage; their arms filled with blankets and chairs. I let out a sigh of relief when we finally hopped out of our Honda onto squishy grass and began prying our camping gear out of the back seat. “I feel like I’m home again,” I said to Evan. He smiled and said, “Yeah me too!”

We took our time finding a spot along the right side of the stage which has become our personal preference at B Chord. The sound quality is absolutely fantastic no matter where you’re sitting, but we prefer a close look at the artists as they make their way to and from B Chord’s backstage area, which is located along the right side on the brewery. B Chord’s MC for the weekend was none other than ‘Delvis’, a character resembling Elvis and Del McCoury. He wore a chrome Del hairstyle and a suit made entirely out of silver sequins. I’m not sure whether or not anyone could take him seriously as he said, “ Keep those masks on when you’re up and moving!”

Following an introduction from Delvis, Keller Williams, donned in a Violet Beauregarde blue puff coat looked longingly down at his mandolin, strummed an opening rhythm and sauntered to the stage landing at its center. Larry Keel followed behind Keller with his wife Jenny, and the two musicians joined their old friend at his right and left sides. Larry was strapped up with his guitar and wore black fingerless gloves and a fur-lined hunting cap. Jenny who was bundled in a mustard-colored snowboarding jacket and fingerless gloves, grasped her bass (possibly for warmth?) The usually barefooted Williams sported a thick black pair of socks. All three musicians had come prepared for the 30-degree Virginia mountain weather.

Despite the biting wind at our backs and their fronts, Keller and The Keels ripped into “Two Tickets to Paradise,” sending us into dancing ecstasy. The crowd took a little longer to get warmed up than we did, but by the time song number four rolled around they crowd began to get into the ‘spirit’ of the show. The trio covered a song by the Canadian indie group, The Strumbella’s titled, “Spirits,” which I thought was definitely one of the highlights of the show. Larry’s cigar-steeped-in-whiskey voice came out strong as it usually does on “Lizard Lady,” which features vocal harmonies from Keller and Jenny that are pitch perfect. The crooning of the chorus, Lizaaaard Ladyyyyy, Lizard Lady, Lizard Loooooovespooooon gives me goosebumps every time I hear it.

Keller and The Keels ended their first set with a song that was apparently quite close and personal to our bartender that evening. In fact, it was the first Keller song he had ever heard, and he was thrilled to be hearing it as he tended to customers that night. “Breathe” bled into their own cover of “Cold Roses” by Ryan Adams and The Cardinals and into the Eagles’ “Seven Bridges Road” before coming back into “Breathe.” This jam was certainly a genre-bender, but it was perfectly blended by the three largely improvisational musicians. The crowd seemed to really enjoy the set closer, and most people had finally gotten to their feet.

As the sun was setting over Round Hill, Keller asked the age-old question, “HOW CAN YOU HAVE ANY PUDDING IF YOU DON’T EAT YOUR MEAT?!” The Pink Floyd jam lasted just under ten minutes and then died down to the twangy Nelson and Jennings tune, “Year 2003 Minus 25,” which came equipped with a few comedic stops and choreographed kicks by the trio. A few of the highlights from the second set included Weezer’s “Hash Pipe,” the original Larry Keel tunes “All Fall Down>Culpepper Woodchuck.” Keller and The Keels ended their set with MGMT’s “Pumped up Kicks” which features a calypso rhythm from Keller, some crazy fast picking from Larry in the breakdown and a few more of those famous acapella harmonies.

After a beat the trio returned for a ripping “Roadhouse Blues” cover which builds nicely between the dizzy blues rifts of Larry’s guitar, the ghostly harmonies, and Jenny’s bass. The crowd who had seemingly been frozen to their seats all night finally broke loose and danced to the line, Woke up this mornin’ and I got myself a beer. This up-tempo closer was just the preparation we would need for the following night of Keller and Grateful Gospel.  As Keller and The Keels strummed their final chords, Keller wished the audience well and said, “Be safe getting’ home.” I remember thinking to myself, “God, I’m so glad I don’t have to go home just yet.”