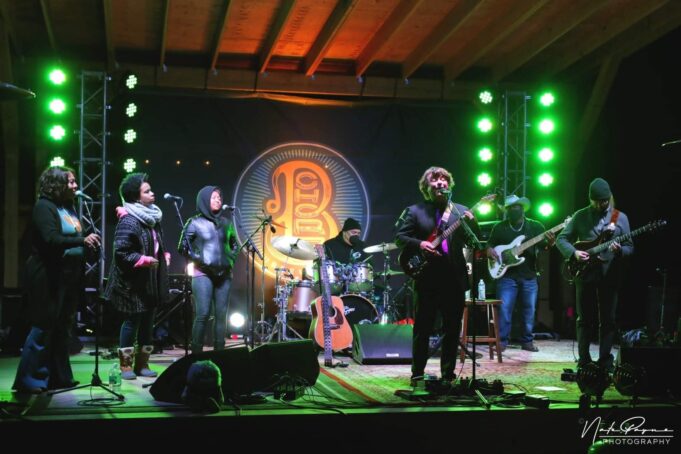 Keller Williams Solo and Keller with Grateful Gospel at B Chord Brewing Company on April 3 2021 by Andrea F. Flohn with photos by Nate Payne

After spending most of the day gushing about how great it had been to see Keller and The Keels play the previous night, we arrived on the grounds of B Chord Brewing at around 5 PM and began setting up our spot. The 30-degree temperatures had finally worn off on the mountain that day and the skies were expected to be clear enough to see the stars. As fans traversed the back lawn and set up their picnic spots, I felt grateful for all of the freedom and supportive B Chord has given fans throughout the pandemic. Many venues have not been quite as generous with their space and potentially great shows have been slightly soured by strict venue policies. In our experience at B Chord, it is up to the individual to decide whether they want to sit close to others or not.

As we waited for the show to start, we met up with a few of our frriends from the Philly area and munched down some Chocolate Funfetti cupcakes I had made for the trip. Evan and I also spent some time trying to guess what songs Keller might play during his opening set and we both agreed that he would most definitely play, “She Rolls” and “Bob Rules” but the rest of the songs were anyone’s guess. Over the year of tuning into Keller’s Cellar, we knew which songs he’d been playing a lot and which songs get requested all the time on social media. Occasionally, Keller would throw a surprise cover into the mix or make something up on the spot, but he definitely has his favorites.

The solo set began with a cover of “Return to the Moon” by American indie group EL VY which has been featured on Keller’s Cellar in the past. The crowd warmed to the sound of Keller’s voice and chime-like guitar picking. Keller’s solo set also featured a spirited “Lawyers, Guns and Money” which finally got the crowd moving and the dogs howling. Keller switched gears into “Black Peter” and then threw the crowd into a unique jam called “Bob Rules>Truth Hurts>Bob Rules”. As Keller sang about being a contestant on The Price is Right, he suddenly made hip-hop artist Lizzo appear in the song. There is no question that this particular jam was a show highlight. Keller’s set ended with an easy-going “Brown Eyed Women,” the highly anticipated “She Rolls,” and everyone’s favorite “Doobie In My Pocket.”

Keller’s solo set was more than enough to get the crowd ready for Grateful Gospel and John K., so the group’s set opener, “Sisters and Brothers” was welcomed by hooting and whistling from the crowd. The band takes this classic gospel track to a different level by combining Benjie Porecki’s funky organ playing, John K’s wild blues licks, Toby Fairchild’s ‘Everybody Now!’ stomping drum beat. Next up the band slipped into “Eyes of the World” which features some lovely picking by John K and some light freestyle synth from Benjie. The fourteen-minute “Eyes” is followed by a joyful “Franklin’s Tower” and then the entire band breaks into another gospel track, “I’ll Be With Thee.”

A few additional highlights from this set include an emotional “Brokedown Palace” which is followed by “Here Comes Sunshine>Midnight Moonlight.” Vocally these traditional Dead tunes translate nicely into gospel songs; in particular “Here Comes Sunshine.” The rising vocals in the song give room for lots of vibrato and the ladies of Grateful Gospel absolutely nailed it.

The three vocalists joining the band that night included Tonya Lazenby-Jackson, Therochelle Owens Moore, and Samantha Reed; all of whom have performed with Grateful Gospel in the past. To finish off their set the band jammed through  “Who Was John?>Mighty High” and kept the momentum going with “St. Stephen>Samson & Delilah>Feel Like a Stranger.”

By the end of the show, a large crowd had gathered at the front of the stage and people bounced around in pre-Easter splendor. As per usual, the band ended with their gospel-lullaby rendition of “Ripple,” and wished everyone a good evening. Needless to say, it was a wonderful experience spending the first weekend of spring with Keller Williams, The Keels, and Grateful Gospel in the mountains of Virginia. Until we can return again, I’ll keep the B Chord music memories I’ve made a little closer to my heart.