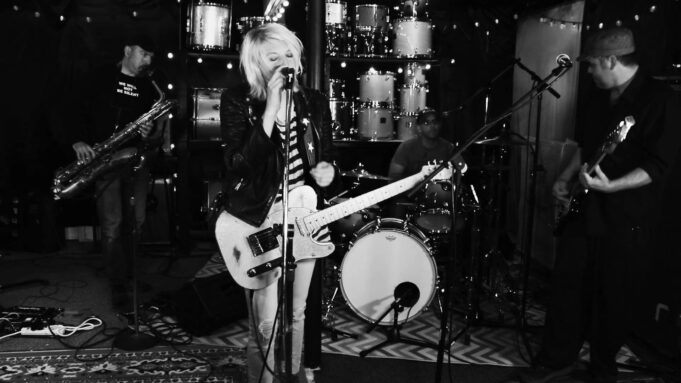 The official music video for ‘Yes Regrets’ by theWorst, is the title track to the upcoming sophomore album by the band and is slated for release in the spring of 2021 on RascalZRecordZ.  The track also features the legendary Dana Colley (Morphine, Vapors Of Morphine) on baritone saxophone and was produced and recorded by Will Holland (Pixies, Fall Out Boy, Dead Can Dance) at Chillhouse Studios in Charlestown, MA. ‘Yes Regrets’ was released as a single on Black Friday 2020.  The music video was filmed and directed by multimedia artist Sparxsea.

theWorst has been on a meteoric rise since their inception.  Led by bandleader and true survivor, Brooke Binion, the band has gained a reputation as a one-of-a-kind raucous live act, fueled by an aggressive raw sound, anthemic songs and a brutally honest lyricism that is rare in today’s highly commercial and often fabricated mainstream music scene.  Having toured nationwide and coast to coast since 2016, the theWorst is comprised of Binion on lead vocals and guitar, alongside Will Bradford (SeepeopleS) on bass and Craig Sala (Paranoid Social Club, Kurt Baker, Planeside) on drums.  The band earned wide critical acclaim with the release of their debut album Jane Doe Embryo (RascalZRecordZ 2017), and the recent release of their new single, ‘Blacksheepish,‘ all produced by by Will Holland (Pixies, Fall Out Boy) and recorded at the legendary Chillhouse Studios in Boston, MA. Recently, the band dropped a new single for charity, entitled ‘Lifer,’ on the non-profit record label CommunityZ RecordZ, with all the proceeds going to the local Maine charity, Maine Trans Net, an organization that supports transgender people and the challenges they face in today’s world.

We had a chance to catch up with some of the band members from theWorst: band leader Brooke Binion, drummer Craig Sala and guest sax player Dana Colley.

LMNR: How did you connect with theWorst originally and end up recording with them?
Craig Sala (drums): I’ve known Brooke for many years, as she was a badass sound technician at some of Portland’s larger venues. We always got along well & luckily, she appreciated my playing. I got a phone call asking if I’d be interested in joining them. –

Dana Colley (sax): I am always happy to contribute to Will’s projects as I know him from SeepeopleS.  “Yes Regrets” was a song he sent me to overdub and I was immediately blown away by the power of this track. Brooke’s fierce confessional comes barreling out over the top of Craig and Will’s dynamic foundation and in a few short minutes I was transformed and left feeling a myriad of emotions. My electric baritone sax seemed to be a likely candidate for this song and It was a pleasure to have had a small part in one of the most compelling tracks I have ever been involved in creating.

LMNR: What part of the theWorst’s sound and or songwriting attracted you to playing with them ?
Craig: The fact that Brooke’s no bullshit lyrics are derived from real life. TheWorst definitely has a 90s alternative/punk/grunge type vibe, something I grew up listening to and playing.

LMNR: ‘Yes Regrets’ is the title track of the new album.  How does this album differ from Jane Doe Embryo.

BROOKE BINION: Probably the biggest difference between the first album and “yes regrets’ is how personal this one is.  A lot of the same general topics are covered, addiction and mental illness, but ‘jane doe’ covered a lifetime of unspecific issues stemming from those things where as “yes regrets” refers to a very specific and extreme two years of my life where I lost almost everything and now it’s about putting the pieces back together and figuring out how to move forward. Lots of guilt and shame and things you cant take back, but you have to go on anyways.

LMNR:  If the album has a lyrical focus and or message, what is it?  What can fans expect from the rest of the songs that will be included on the album.

BROOKE BINION: I wanted the overall lyrical focus to be about bipolar disorder and things in life that are themselves bipolar. Whether or not I pulled that off remains to be seen, but that was the vague idea. Every song is different, but there are undertones of that in every one.  It was a powerful experience to come out of a continuous more-than-a-decade long extreme addiction to heroin and then alcohol and everything else in between only to realize that those things weren’t the only problem, a lot of it was just me. I’m still figuring out how to live with a brain I can’t always trust.