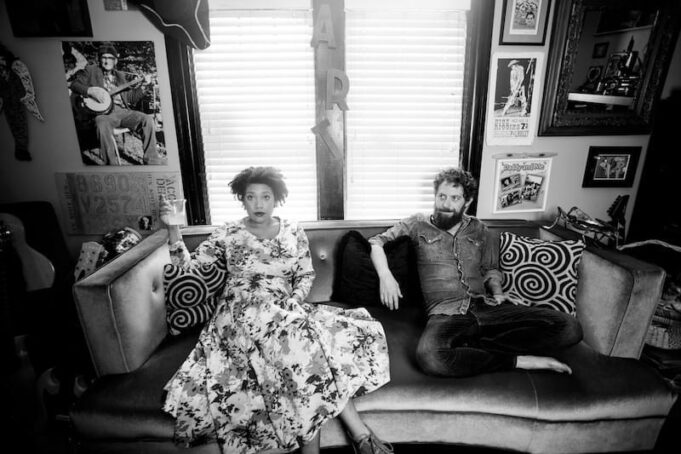 According to Allen Thompson and Keshia Bailey of Nashville’s genre-defying band, LadyCouch, it takes a lot of optimism and a little bit of nostalgia to stay hopeful during this pandemic. At the start of the lockdowns, the two musicians admitted that they were just as thrown off as the rest of the world, but they decided to use the time they were given to hone their many crafts. As a result, LadyCouch has released four singles in 2020, including “Foolish and Blue”, “Good God”, “Heartache”. Their most recent single, “Delightfully Devilish”, which was released on December 4th, is filled with the nostalgia of watching The Simpson’s as a kid and the optimism that comes from just being plain silly.

This past week, I had a chance to speak with Bailey and Thompson about the new single, their experiences with socially-distanced concerts and livestreaming, and what to look forward to next.

Andrea Flohn for LMNR: How have you guys been managing the pandemic so far?

Keshia Bailey: Well, lots of writing. We were lucky we could kind of work on our crafts a little bit and have the time to do so. But yeah, it’s been strange for everyone else, I’m sure.

Allen Thompson: Yeah, I think at the beginning, everything was all so new and weird and then all the sudden, it was like, “Okay, the whole world is all in the same boat, and this is unprecedented, but there’s a lot we can work with here.” I think I went into it writing a lot, with just this great sense of optimism for whatever was gonna come next, and I thought what was next would happen a lot sooner than it has! (Laughing)

LMNR: Has it been hard collaborating and getting together as a band?

Allen: Yeah, we have gotten together as a band maybe six, seven times over the last eight months, and that sounds like once a month. But basically, there’s a like a livestream show and a recording session, and each of those situations probably took about two days.

LMNR: Where were the live shows held?

AT: We did our first live show back on October 30th, at City Winery here in Nashville. They set up a big tent in the outdoors and had all these tables with these little AstroTurf rugs under the table, so you’ve got your own little lawn dancing pod. And it was good! It was fun. It was really weird. It was weird not having played together like that in seven months, for humans. I’m interested to see how that kind of thing continues to the winter. I was glad we got in and were able to do it when we did.

LMNR: Looking forward, will there be any more livestreaming from you guys?

KB: I would say probably.

LMNR: What is your main platform for livestreaming?

AT: We did a lot with The Purple Building, which is Todd Snider’s studio in Nashville. We also did a stream with Michael Weintrob with his Instrumenthead Live. That one was really cool. He’s got a really great thing going for Paste Magazine this week and he’s hosting a ton of streams from his studio. But yeah, we love Michael. He did all the photos for our single art and upcoming album art as well, so he’s a good friend.

LMNR: Your new single, “Delightfully Devilish”, is out today. Tell us a little bit about the roots of the song, namely the ‘Simpson’s experience’.

AT: (Laughing) That song came out of the free Disney+ month during quarantine, with the help of Canna Brand edibles.

LMNR: Excellent! Well, I don’t think it’s too hard to figure out who the song’s about.

AT: Good! I was wondering how obvious to make it. Just today, I’ve been reading reactions to it on our social media posts and stuff and they’re just like, “Oh my God, I realize what you’re doing!” So, it’s been pretty funny to watch.

AT: We’re gonna put out a full-length record with our label, Café Rooster, in the spring. The same sessions that yielded these last few singles yielded several other songs, so we’re in the overdub and mixing, and just kind of making sure it’s what we want to put out in space. We’re thinkin’ May, that’s the hope.

KB: It will be here before we know it!