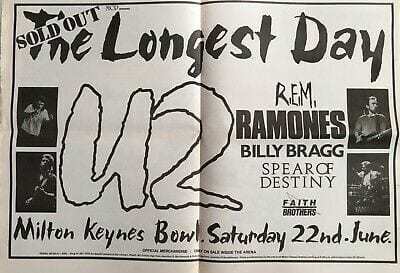 The vast expanse of Milton Keynes Bowl echoed to the sounds of a nascent REM and the familiar buzzsaw guitars of The Ramones, among others, before U2 took the stage in pouring rain on 22nd of June 1985. The banks of the former clay pit saw scenes of naked people surfing the mud throughout the day, and as the strident bars of ’11 O’clock Tick Tock’ rang out we knew we were in for something special.

Fresh from the success of ‘The Unforgettable Fire’ album, Bono announced that this may be the last time they played some of the earlier songs – the opener being a single-only track that preceded first album ‘Boy’ and for many of us, these were the songs we had come to hear. ‘I Will Follow’  hit the crowd hard, an unusual choice of ‘Seconds’ slowed the pace, and then the eerie, atmospheric title track from ‘The Unforgettable Fire’ set the scene for the ‘new U2’ sound, one of soundscapes and moods that took things to another level.

When the Rain Comes

The relentless rain could easily have spoiled the day, but for the capacity crowd – 50,000 and more – it didn’t matter. Following a rousing ‘Sunday Bloody Sunday’  complete with trademark white flag and ‘this is not a rebel song’ introduction came a stunning rendition of one of the great songs from 80’s rock, ‘The Cry/The Electric Co.’ with The Edge’s metallic riff bringing the crowd alive in the singalong sections. This was truly special, a moment to saviour, but the best was yet to come.

When the sequencer intro to ‘Bad’ wouldn’t play along – rain effectively stopped play – the band halted proceedings for the technicians to try and fix the problem. Bono’s attempts at telling jokes were as bad as could be, and he asked for requests. Someone, somewhere, shouted ‘Rain, The Beatles’. A little-known Beatles song, a B-side no less, became a surprise standard for the band who improvised it for the first time here, much to the delight of the crowd. In fact, it’s a great karaoke number so if you want to try it here’s some info on what machine to choose.

U2 were already a massive-selling band, but it was performance such as this landmark concert that singled them out as contenders for the biggest band on the planet. Having failed to fix the electronics, The Edge began the guitar intro to ‘Bad’ in solo, the echoing chords almost glistening in the shimmering rain as this industrial rock song started its remarkable journey. It would be a highlight of ‘Live Aid’ at Wembley Stadium just a few weeks later, but here it was a simply breath taking performance.

The beautiful piano chords of ‘October’ brought relief for those who had been dancing their day away, but it was really an extended intro into an anthemic ‘New Year’s Day’ and then the closing track, the magnificent ‘Pride (In the Name of Love). Triumphant, one of the greatest bands of all time braved the still pouring rain for an encore of their song for special moments ‘Party Girl’, the wonderful ‘Gloria’ and traditional set ending ‘40’ the chorus of which echoed on sung by the crowd as we left the arena. This was one of those days that the crowd were fully immersed in, and that could only be enjoyed despite the frankly terrible weather. At that point, those of us who had witnessed ‘The Longest Day’ were fully aware we had been part of a ground-breaking occasion, one that set the path for the best band of the generation to follow.

Drop us a line at [email protected] with your live music news, concert memory, show review, or to say Hi!

Also, check out the upper right hand corner for a search feature that allows you to seek out your favorite artist, venue, event, or genre. We have tons of exclusive content you can’t find elsewhere including audio, video, and photography.