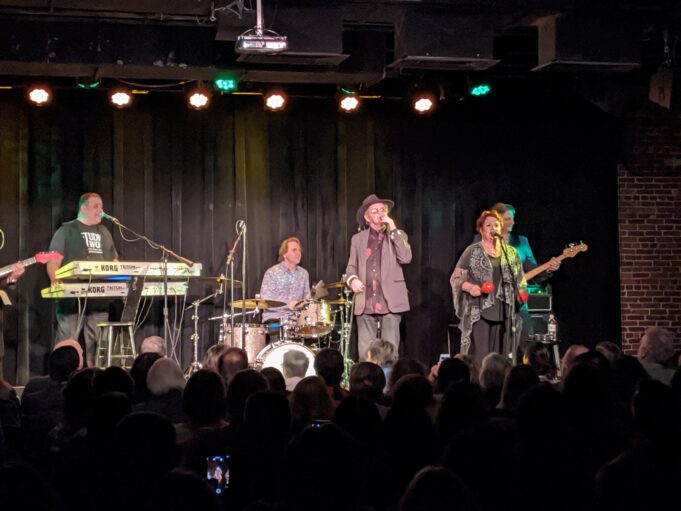 Micky Dolenz visited the Center for Arts in Natick MA on Thurs Feb 13th 2020 for a sold out show.

TCAN in Natcik was filled with mostly older generation folks, but a nice sprinkling of grandkids were in attendance on this night. Micky Dolenz, famed drummer for television comedy band The Monkees came to town for a sing along, and whether it was those fans he had earned with his music back in the 60s and 70s or younger folk who have learned about the Monkees through hearing the music on the soundtracks to Shrek, Dolenz and his band delivered to them all.

The band which featured four musicians (bass, drums, keys, and backing vocals) in addition to Dolenz performed for two full sets.   Dolenz fronted the band and his younger sister Coco sang back up.  Her featured song veered from the Monkees catalog and was a cover of a Linda Rondstadt song. She was great and she has a really good voice.

Dolenz performance covered the expected Monkees classics but also dove into classics by a variety of bands from his era from Spencer Davis to the Beatles. And of course the Monkees music also featured incredible song writers behind the music (Carole King, Neil Diamond and Paul Revere among others) so in a way this show became a showcase of the quality pop song writing of the 1960s and 1970s as performed by someone who was smack in the middle of that whole scene.

Dolenz told the tale of meeting the Beatles in London back in their heyday. Apparently he got to go to a party with them, and folks tell him he had a good time…

There was a fee based meet and greet after the show, but first Dolenz went and did a quick signing at the merch table for regular fans. Dolenz is a big supporter of the Make A Wish foundation – and he has two benefits concerts coming up in NYC for them.

If you don’t stand up and wave your hands over your head to “Day Dream Believer” while singing the chorus at the top of your lungs, then you have no soul.

That Was Then, This Is Now (The Mosquitos cover)

For Pete’s Sake (The Monkees song)

Me & Magdelena (The Monkees song)

I’m So Tired (The Beatles cover)

Back in the U.S.S.R. (The Beatles cover)

Drop us a line at [email protected] with your live show review, live music news, or perhaps even our latest distraction- historic show reviews and memories.