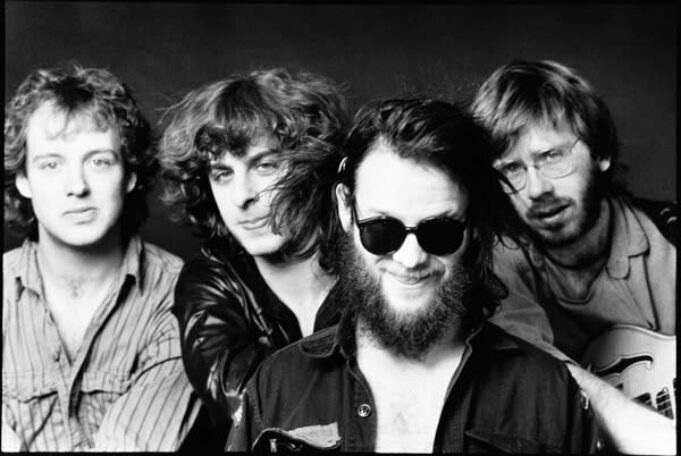 In the fall of 1988 I started classes at UMass Amherst. It was a whole new world for me in so many ways, as it is with all freshmen, I guess. New friends, new classes, new living environs, and of course, new music. I was introduced to Max Creek within a week or two of moving to UMass and saw them at the Living Room in Providence RI.

There is nothing like a college dorm that brings people together. I made new friends all throughout my building and around campus, and was introduced to tons of new music from these people, bands I hadn’t heard of before. Sophomore year I got a tape from my buddy Jerry of this new band I’d been seeing fliers for, out of Vermont- Phish. It was the Junta album basically, on cassette and I was instantly hooked on “Fee” and other tracks.

So when it was announced that Phish was playing the Student Union Ballroom I was stoked and got tickets. I was starting to submerge myself in the bootleg tapes too and my interest in the band was growing. I had already been into the Dead all the way back to 1987- so by the time that February of 1990 came around I was musically ready for what this quartet from Vermont would bring to me.

There was more than a small winter storm that day on campus, with freezing rain falling. This didn’t stop around one thousand fans from packing the ballroom. I was getting excited and ready when the support band took the stage. I knew that they were from Georgia but I didn’t know anything about Widespread Panic before that moment. They took the stage like they were kicking a door open in a wild western film.

I didn’t know a single note by the band, but was immediately struck by their energy. Dave Schools was a madman on the bass, with a wild look and bass lines to match. The band’s sound in total was an easy sell for me, with their Allman Brothers meets the Dead vibe, but tailored into something that was uniquely their own. I was sold, and danced so hard that I was sore and nearly overtired for the Phish show (nearly).

You can also check interesting articles on Music at Spriee.

I am lucky to have been able to see Houser so early on during their development and songs like Space Wrangler stuck with me. I did see the band a few more times over the next half dozen years, mostly in Eugene OR once I had transferred to the U of O, but none of those performances struck me nearly as much as this one did. The band was all raw, rural energy.

Phish came out next and the room errupted. To say that the whole show was early classics is itself obvious. I was taken by their compositions, the rawness of the sound, Trey’s wide open guitar tone, and the sheer joy that the band was exhibiting on stage. I can clearly remember, despite the fact that it was thirty years ago- the elation that I felt during “Golgi Apparatus” for instance- the atmosphere breaking energy climax of “I saw you! With a ticket stub in your hand…”

This felt like a band that was speaking directly to me. Not with the poetry of Robert Hunter and the Grateful Dead, not the matured jams or folklore-ish culture of the Dead or the Allmans or of classic rock. Rather, this was a new kind of band- a band that had learned all of the lessons of those other bands, and who were catapulting themselves into the future with those lessons to learn new ones. They were breaking down barriers.

Additionally there was an amazing end to the day’s winter storms- the entire campus crusted over in a thick layer of ice. The ballroom was super heated, the sweat and body heat of those assembled threatening nearly to set off the smoke alarms. But at the back of the ballroom the doors to the outside were open, and the cold air was blasting in relieving the near stroke level heat we were feeling. And I discovered quickly one of the most awesome experiences I’ve had at a concert.

With the band in full volume, I was taking a running start from the ballroom onto the outdoor patio and jumping- then sliding hundreds of yards on the ice sheet that had formed, down toward the campus green and pond. Dozens of others were doing it, and it was the physical manifestation of the joy we were feeling. Incredible heat, running energy, the joy of sliding, the coolness of both the air and the experience, all with the perfect soundtrack rattling our brains. This was the most fun anyone could have!

I remember the standouts of “Bouncing Around the Room,” “You Enjoy Myself,” “Reba” and “AC/DC Bag,” too. If I hadn’t been already sold in the year or so I was discovering them, this night cemented it for me. The crowd jumped up and down in total rapture from start to finish. There was something about the energy of those early days, like a tent revival for live music enthusiasts. We were seeing the light.

I went on to see Phish for decades longer- some 75 shows or so under my belt. But it all started here. My friends were all here, ones who I had known since I started school, and brand new ones with whom I would share the joy of this new band for years to come.

The opening acts were Widespread Panic and Gene Matthews. The Ocean (Led Zeppelin) was teased in the YEM vocal jam. Mike’s Song started as David Bowie.

So here in the Spring of 2020, we don’t have shows to attend due to the global pandemic. We’re responding by bringing around memories of shows past. What’s a favorite show of yours? Is there a show that changed your life, altered your consciousness, or is just a show you’ve told your friends about for years afterward? Tell us about it.

Drop us a line at [email protected] with your live music review or news story.

You can also check interesting articles on Music at Spriee.