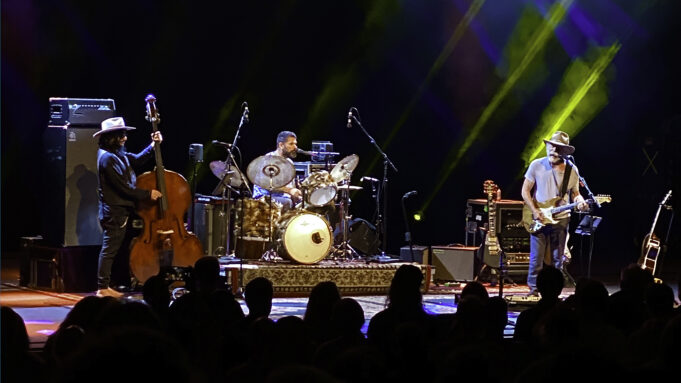 Round about 7:00 p.m. on a balmy and political Tuesday in the kind city of Durham, the grateful gathered for an evening with the bards.  Smiles, hugs and greetings echoed throughout the Durham Performing Arts Center’s lofty lobbies.  The crowd felt gently expectant, ebullient and shiny as the night air, polished by the afternoon rains.  “Ladies and gentlemen, the show will begin in two minutes.  Please take your seats.”  A quick run up red-carpeted stairs, a moment to take in the intimate concert hall, the equally intimate and sparse stage set-up—three oriental rugs, drum kit center, bass leaning stage right, guitar and monitors stage left—and Bob Weir and Wolf Bros strode out to their places.

Did I detect a slight swagger to Weir’s step under his cowboy hat?  A lengthened stride?  There was a decided bent to the raw, throaty tone of the trio’s sound.  Long known for his characteristic guitar style that emulates jazz piano, embracing both rhythm and melody, it was delightful to hear how this played out in the basic and open chords of campfire songs and Dead standards alike.  Often it sounded like he was playing both rhythm and lead simultaneously, as if the magic of the hat and the swagger in his step had opened up the groove that little bit wider.  There was something too of the wolf’s open jaw to the sound, roaring open maw, each note glistening like a pearly tooth.

Providing a vigorous and energetic percussion, it was a joy to hear Jay Lane’s drums again, hearkening me back to the RatDog days.  Lane’s vocals were a welcome addition, and the crowd cheered his drum-stick-wide, steal-your-face-right-off-your-head smile during “He’s Gone.” Likewise wearing a cowboy hat, bassist Don Was rounded out the sound, undergirding the groove, deepening and stretching it, plucking and strumming its bones.  Throughout the night, the room reverberated with such a remarkably rich sound, I was often astounded to open my eyes and see only three musicians on the stage.

The trio first launched into “Hell in a Bucket,” co-written by Weir, John Perry Barlow and Brent Mydland in the 1980s, an apt opener for Super Tuesday eve.  They then moved into Robert Hunter and Jerry Garcia’s “Loser” and “Mama Tried,” a Merle Haggard tune that gave its nod to the Durham County Courthouse and Jail, but a stone’s throw from the concert venue: “I turned 21 in prison doing life without parole.”

It was during “Gonesville,” a Weir collaboration with Josh Kaufman and Joshua Ritter from his 2016 solo album Blue Mountain, that something clicked, the key turned.  Perhaps it was that intimacy of space and time, or the simplicity of the tune’s chords and upward lift of its melody, but at that moment, the campfire began to crackle, and the crowd’s faces lit warm in its glow: and there we were, at the bard’s circle, singing together “I’m about to be free.”

And yes, undoubtedly, the “I Voted” stickers spied amidst the usual Stealies leant a political cast to the evening.  Yet the tale that the songs told was more of the “personal is the political” variety.  It was a tale of our individual autonomy and our collective power, a tale of the power of the people.  In Dylan’s “Masterpiece,” we rejoiced in the awesome playground of the Coliseum, the importance of believing that “everything’s gonna be different . . . in the land of Coca-Cola.”  With Julie and her rabbit in “Row Jimmy” we remembered that it’s hard work that will get us there.  What is that magical thing that happens in that song’s cadence as we together row?  The simple repetition starts to amplify, we pick up a beat.  Under our own steady steam, we begin to accelerate.

The first set ended with Weir and Barlow’s “Throwing Stones,” an epic speaking-truth-to-power commentary on American politics.  The extended jam in the middle of the song was a highlight of the evening.  Weir’s guitar drawing liberty from the fire in the earth and sending it soaring joyfully upward, making the echoing, triumphant declaration, “We are on our own!” seem dizzying and hopeful and possible, even in the face of today’s immense human challenges; harnessing that innate human drive to create, even though we dance on our own graves; and conveying that sense of embodied home we felt as kids, holding hands and collapsing in laughter at the ending of the nursery rhyme, “Ashes, ashes, we all fall down!”

The second set opened with Little Feet’s “Easy to Slip” and then flowed through a delicious line-up of the good ol’ Grateful Dead, augmented by Jimi Hendrix’s “All Along the Watchtower” and the Charles Hardin/Norman Petty “Not Fade Away” popularized by Buddy Holly.  A sparse but funky “Shakedown Street” danced my feet and thrummed the heart of dirty Durm.  “He’s Gone” with its New Orleans celebratory, big band strutting, flowers cascading, funeral parade chorus, “Nothing’s gonna bring him back,” did its part to keep marching our culture’s old way of being right on out of town.

Its first notes rising like a daybreak, “Playin’ in the Band” was a treat, the audience singing along to Hunter’s reminder that, “When it’s done and over, Lord, a man is just a man.”  Weir’s and Lane’s vocals deftly wove and flung aloft “Bird Song’s” lullaby: the gentle embrace of a mother singing to her child, sleeping beneath a pressing quilt of stars, caressed by the wind.  The song an expression of our collective strengths to soothe and heal and assuage the thrown stones: “the fear down here we can’t forget . . . the petty wars,” the truth “that you can buy the whole God damn government today.”

A rousing “Watchtower” followed, that castle on the cultural promontory rising from the mists.  And as Weir, Was and Lane drew their notes from the hallowing winds, I am certain some new bit of land was created, putting a little more distance between us and the urgency of the two riders.

“Stella Blue” was up next, its placement in the second set reminiscent of the Dead’s set structures of the 1990s.  Weir’s voice, grown as old and seasoned and wise as his whitened Lorax beard and hair, delivered the Garcia/Hunter tome with an aching beauty and determined strength, breathing life into the mythic form of Stella Blue who rose as tall as the stars.  The audience responded with loving catcalls of “Bobby!” and that one voice from the balcony, still drunk on the day’s politics: “Bobby for President!”

As the tell-tale “bop-bop-bop-bop” beats of “Not Fade Away” rang out, the audience responded to the call, clapping and singing back to the band.  And that, that is the awesome power of the people: our love that will not fade away.  What a thing it is to stand in a concert hall amidst a mighty throng, fueling that love with singing and clapping and a music beyond description.

Unstrapping his guitar and leaving the stage, Weir doffed his hat in an almost playful gesture.  Amidst a standing ovation, the trio quickly returned for an encore of Dylan’s “It’s All Over Now, Baby Blue.”  Keeping and gathering fast what I needed from the night’s jewels, I felt an overwhelming sense of peaceful exhale.  And a deep gratitude for this music and the bards who keep her alive.  Even as this fire circling ends and we drift back out into Durham’s ways and means, we walk now with the truth that the value, like that of the multi-layered, multi-faceted cycles of this “spinning ball of blue we call our home,” isn’t in the outcome of one turn at bat, but rather, is found in the repetition of experience: “Strike another match, go start anew.”

Bob Weir and Wolf Bros will continue their tour throughout March, with stops throughout the South, Midwest and Northeast before ending with a free show in Wyoming at the Jackson Hole Rendezvous Festival and a three-night run in Aspen, Colorado.  Weir, Lane and Was are brilliant musicians, crafting together an accomplished, warm and enticing sound, not to be missed.  Run children, go run and see!

SET ONE:
Hell in a Bucket
Loser
Mama Tried
Gonesville
When I Paint My Masterpiece
Bombs Away
Row Jimmy
Throwing Stones

Set 2:
Easy to Slip
Shakedown Street
He’s Gone
Playing in the Band
Bird Song
All Along the Watchtower
Stella Blue
Not Fade Away