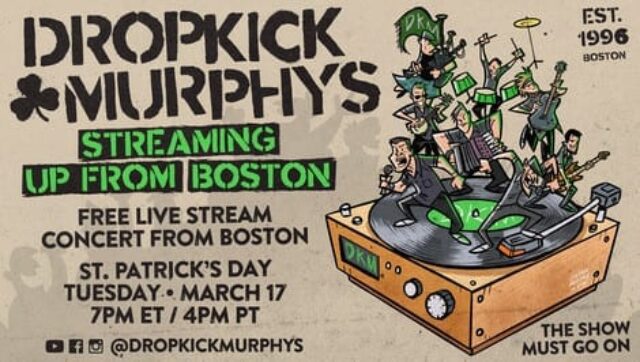 Dropkick Murphys are throwing a St. Patrick’s Day party this year and the whole world is invited. Dropkick Murphys’ Streaming Up >From Boston online concert will be simulcast worldwide on Tuesday, March 17 (St. Patrick’s Day) at 7:00 PM ET / 4:00 PM PT via the band’s YouTube, Facebook Live and Instagram pages, as well as via Twitch.

Dropkick Murphys founder Ken Casey explains, “For the first time in 24 years, we are not playing on St. Patrick’s Day weekend. The current world situation is the ONLY thing that would ever stop us from doing so.”

The band recently released the single “Smash Sht Up,” and will release a new album on September 11 through the band’s own Born & Bred Records. “Smash Sht Up” is available digitally and on limited edition colored vinyl paired with B-side “The Bonny,” a cover of Gerry Cinnamon’s 2019 song.

Since forming in 1996, Boston’s Dropkick Murphys have sold a staggering 7 million albums worldwide, with 2005’s The Warrior’s Code achieving an RIAA Gold certification and its smash single “I’m Shipping Up To Boston” nearing double platinum and appearing during a key moment of Martin Scorsese’s Academy Award-winning The Departed. Dropkick Murphys have become ambassadors for their Boston hometown and have built a legacy that does Beantown proud.

The band recently released the single “Smash Sht Up,” and will release a new album this fall. “Smash Sht Up” is available digitally and on limited edition colored vinyl paired with B-side “The Bonny,” a cover of Gerry Cinnamon’s 2019 song. Recently, Dropkick Murphys’ song “Rose Tattoo”–from their Signed and Sealed in Blood album–was chosen by Loudwire as one of the “Top 66 Best Of The Decade Rock Songs,” appearing at #21 on the list.

For more information on Dropkick Murphys, and to watch the Streaming Up From Boston online event, visit: 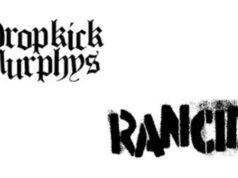 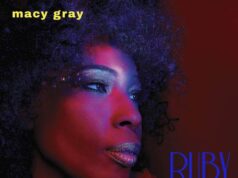 Macy Gray, Up Close and Intimate

Guster can still “Keep it Together” after 25 years: four nights...