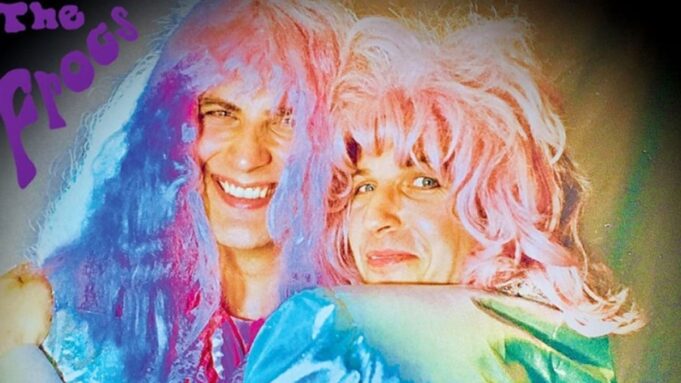 Devoted fans were out in force and happily embraced The Frogs’ rare, compelling and strong show at the Roxy in West Hollywood, CA on February 19th. The Frog’s material melds various styles of music together including pop, glam rock, punk and goth. Some of their songs are more melodic and accessible, while others sound idiosyncratic, free-form and offbeat like poetry set to music. The music can be a bit of an acquired taste, and at times, strident sounding, but it was definitely not safe, conventional fare.

The bands’ followers seemed to enjoy the adventurous nature of the material and looked on approvingly when a song was performed they particularly liked. The lyrics are renowned for being sometimes offensive based on the Frogs’ eccentric sense of humor and they also take on and tackle issues of race, sex, death, hope, darkness, contemporary culture and the music business.

The Frogs were formed in 1980 by two brothers from Milwaukee, Wisconsin singer/songwriter/guitarist Jimmy Flemion and  percussionist Dennis Flemion. They would go on to work with many musicians (Eddie Rosenberg from Urge Overkill to Kelley Deal from The Breeders) but the Flemions would remain the creative force and nucleus until Dennis Flemion passed away in 2012.

Though The Frogs never had a large mainstream audience, they had several important alternative rock artists and bands like Kurt Cobain, Pearl Jam, and Smashing Pumpkins exposing the seminal act to far more listeners. A number of them were at the Roxy who eagerly and enthusiastically greeted Flemion and his good friend (a Frogs fan) Evan Dando (The Lemonheads) who played drums and sang during the eclectic performance featuring many songs from The Frogs’ catalog: “I’ve Got Drugs (Out Of the Mist),” “Closed Casket,” “God is Gay,” “Meglaomaniac,” and “F’D Over Jesus” (dedicated to the memory of Dennis Flemion) and the satisfying set included some great covers: “One” (Harry Nilsson), “Starman” (David Bowie), “Carblack (The Wizard’s Hat)” (T-Rex) , “Sometimes It Snows In April” (Prince) and “Superjerk, Superstar, Supertears (Sebastian Bach) and a few of The Lemonheads’ numbers including “It’s a Shame About Ray.”

Jimmy Flemion is a talented and diverse guitar player. Flemion has an incredibly strong and commanding presence as a frontman and bears a striking physical resemblance to Peter Garrett of Midnight Oil. He often left the stage and interacted up close and personal with the crowd.

Evan Dando was more in the background supporting Flemion. He was incredibly low key and deferential to Flemion whom he seemed to be taking musical direction and cues from. Behind a very messy and disheveled mane of long hair, one could occasionally peek a smile beam warmly across his bearded face as he seemed content and relaxed in his role. Dando accompanied his longtime friend onstage basking in the glory of The Frogs songs letting Flemion, who like a lighting bolt of energy, lead the way live with a passionate and reinvigorating performance, longtime fans won’t forget anytime soon.

Set List
One
Reelin’ & Rockin’ #1
I’ve Got Drugs (Out of the Mist)
Closed Casket
God is Gay
Megalomaniac
Whether U Like It or Not I Love U
Starman
Starboy
Lord Grunge
Rosy Jack World
It’s a Shame About Ray
Gather ‘Round for Savior #2
F’D Over Jesus
Catblack (The Wizard’s Hat)
Whisper
Superjerk, Superstar, Supertears
Fuck Off