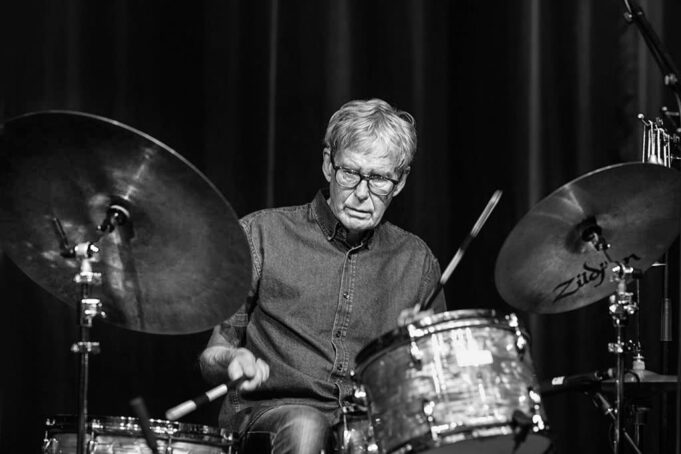 When we saw the news of the passing of Jon Christensen we knew that his influence was far reaching as a musician. We contacted contributor Keith Halladay who is also a drummer and asked him to reflect on Christensen’s legacy.

Jon Christensen, the great jazz drummer, died the morning of February 18, 2020, in his hometown of Oslo, Norway. He was 76.

Christensen is best known for his large body of recordings on Manfred Eicher’s ECM label, and helped define the spare, haunting, pristine sonic qualities associated with the “ECM sound.” It was on that label that he performed throughout the 1970s as a member of Keith Jarrett’s “European Quartet,” along with saxophonist and fellow Norwegian Jan Garbarek and Swedish bassist Palle Danielsson. The albums Jarrett released with that ensemble—studio sessions “Belonging” (1974) and “My Song” (1978), along with the live recordings “Personal Mountains,” “Nude Ants,” and ‘Sleeper” (all 1979)—cemented both Jarrett’s place as a composer and bandleader and Christensen’s own international reputation as a first-call sideman.

Rather than here recapitulate Christensen’s biography and lengthy discography (done very well here (https://www.wbgo.org/post/jon-christensen-inspired-norwegian-drummer-heard-dozens-ecm-albums-dead-76), for the curious), I’d like to describe the particular characteristics of his playing that I find most appealing, which are also those which made so in-demand as a session musician and live performer. To do this, I’ll focus on one particular song: “Country,” from Jarrett’s “My Song.”

“Country” is Jarrett at his most sentimental and accessible, performed at a relaxed, even stately pace, with a clear, leaping melody, a simple structure, and strong, satisfying harmonic resolutions. In this sense it’s rather atypical of Jarrett’s songwriting, and perhaps of modern jazz generally. But its simplicity presents certain challenges to the jazz drummer.

First, it isn’t swung. The feel is straight quarter notes, like a pop song, and both melody and chord progression imply a heavy downbeat on the one and three, and a backbeat on two and four. Indeed, a drummer might play only that, and it wouldn’t feel inappropriate in the least. For Christensen, however, working in the jazz context, the question becomes how to honor that simplicity, to remain true to the purity of the composition, without playing anything all that simple.

Second, Christensen must find a way to complement the busy rhythmic situation created by Jarrett’s piano and Danielsson’s bass without merely following it. Jarrett’s style at the keyboard is both lush and quite rhymically propulsive, which are two of the traits underpinning his wild success as a solo-piano artist, but which leave not much room for percussive accompaniment when he plays with an ensemble. Add to that Danielsson’s powerful right hand, outlining the chord changes and bar lines crisply and precisely, and Christensen’s task becomes still more difficult.

In short, then, Christensen must play a simple song simply, but without either duplicating what his bandmates are already doing or playing too much, or too far “out,” thereby detracting from the gentle, lyrical sensibility of the composition.

And so on “Country” he does just that. On his ride cymbal he sticks to quietly played 8th notes, finding spaces to add accents and 16ths so that they become extensions of Jarrett’s and Danielsson’s lines, rather a separate percussion track. On the snare he states and displaces the backbeat in equal measure, never in a distracting fashion, but according to the particular demand of the song at that moment in time, whether it be swelling with emotion or receding into contemplation. Likewise on the bass drum he opts most often for syncopated 16ths, sometimes leaving the big downbeats to Danielsson, sometimes joining him for extra emphasis on the stronger harmonic changes.

It’s an exercise in restraint, unlike it comes time that it shouldn’t be. After leaving plenty of space for Danielsson’s solo, played over the song’s A section, he becomes more aggressive when Jarrett takes over at the B, around the 3:07 mark. Here Christensen raises his profile, pushing against the piano, answering its accents and suggesting more. As Garbarek’s saxophone returns to restate the melodic head, both Jarrett and Christensen have reached a crescendo: now, and only now, is the time for a crash cymbal, and then for powerful rimshots as Garbarek wails the highest notes of the B melody, at 3:50.

Into the afterglow: in the tune’s last minute, as Jarrett and Garbarek return to the A melody, Christensen becomes playful, less restrained. In the second go-round, at 4:30, he teases a samba on the bass drum and one can imagine a shared laugh in the studio: “you’re really going to play that now? Ha!” But the song is coming to a close, so Christensen backs off, lets the melody breathe until its final resolution.

Christensen was capable of performing the most technically challenging parts in jazz, both with Jarrett and throughout his extensive catalog from the 1970s right up until his death, but his taste and immense musicality separate his playing from many of his contemporaries. On “Country” and on countless other recordings, he becomes the mortar in a brick wall, his fluidity and flexibility filling the gaps where they need to be filled until the framework becomes a solid, cohesive structure. He will be greatly missed.