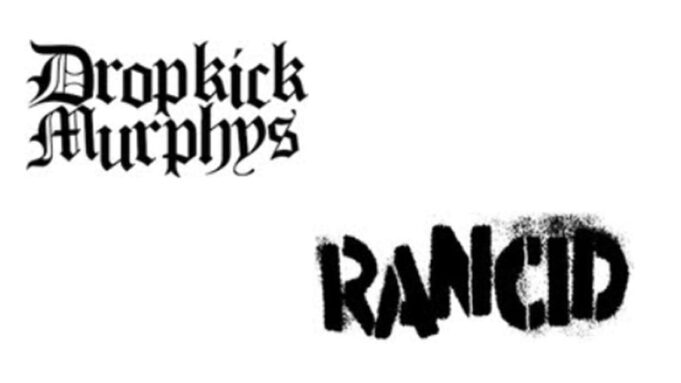 The two bands continue a years long tradition of performing together with tour dates from coast to coast.

This May, Dropkick Murphys and Rancid will hit the road together for the first time since 2017, for the co-headlining Boston To Berkeley II Tour with special guests Scottish singer-songwriter Gerry Cinnamon (on select dates) and Jesse Ahern supporting. Each night will culminate with Dropkick Murphys and Rancid on stage together for a joint encore.

As was the case on the original From Boston To Berkeley run in 2017, the final band of the night will vary by date, with either Dropkick Murphys or Rancid as the closing act.

Tickets are on sale now for the May 3 – 24 trek. This spring tour route will also feature festival appearances by Dropkick Murphys and Rancid at Epicenter (May 3 – Concord, NC), Welcome To Rockville (May 8 – Daytona Beach, FL) and Sonic Temple (May 17 – Columbus, OH).

Rancid and Dropkick Murphys have a long and important history together. Back in 1997, Rancid’s Lars Frederiksen came across a copy of Dropkick Murphys’ original EP at a friend’s house. He turned it over to his bandmate and Hellcat Records president Tim Armstrong, who quickly snatched up the band for his new label.

Dropkick Murphys’ founder Ken Casey said, “We’re excited to team up with our old friends Rancid again for the second edition of the Boston To Berkeley tour! And we’ll be joined by Glasgow, Scotland superstar Gerry Cinnamon – on his first U.S. tour!”

Rancid’s Lars Frederiksen said, “Looking forward to getting out with the Dropkick Murphys again for the second edition of our Boston To Berkeley tour in May. Gerry Cinnamon from Glasgow will be joining us for his first ever U.S. tour! This is one you won’t wanna miss.”

Since forming in 1996, Boston’s Dropkick Murphys have sold a staggering 7 million albums worldwide, with 2005’s The Warrior’s Code achieving an RIAA Gold certification and its smash single “I’m Shipping Up To Boston” nearing double platinum and appearing during a key moment of Martin Scorsese’s Academy Award-winning The Departed. Dropkick Murphys have become ambassadors for their Boston hometown and have built a legacy that does Beantown proud. The band recently released the single “Smash Sh*t Up,” and will release a new album this fall. “Smash Sh*t Up” is available digitally and on limited edition colored vinyl paired with B-side “The Bonny,” a cover of Gerry Cinnamon’s 2019 song. Recently, Dropkick Murphys’ song “Rose Tattoo”–from their Signed and Sealed in Blood album–was chosen by Loudwire as one of the “Top 66 Best Of The Decade Rock Songs,” appearing at #21 on the list. Dropkick Murphys–Al Barr (lead vocals), Tim Brennan (guitars, accordion, mellotron, whistles, vocals), Ken Casey (lead vocals, bass guitar), Jeff DaRosa (banjo, bouzouki, mandolin, harmonica, acoustic guitars, vocals), Matt Kelly (drums, percussion, vocals), James Lynch (guitar, vocals), Kevin Rheault (touring bassist), Lee Forshner (touring bagpipe player)–continue to tour in support of their 11 Short Stories Of Pain & Glory album (released through the band’s own Born & Bred Records in 2017), which debuted at #8 on the Billboard Top 200 and was the #1 independently released album.

Emerging from the blue-collar swamps of Berkeley, California, Rancid has now been a living, breathing punk rock band for over a quarter century. Back in 1991, after the demise of their much beloved first band, Operation Ivy, founding members Tim Armstrong (vocals, guitar) and Matt Freeman (bass, vocals) decided to do the impossible ­– start an even better band. Thus, Rancid. Signing with Epitaph Records, the band released their first album Rancid in 1993. Shortly thereafter, Lars Frederiksen (vocals, guitar) joined the band, because…well, are you going to tell him he can’t? The result, in 1994, was Let’s Go. In 1995, Rancid released the classic platinum-selling …And Out Come The Wolves. You still remember when you first heard it. They followed with the even more ambitious Life Won’t Wait in 1998, and in 2000, Rancid released another album entitled Rancid, just to see if anyone was paying attention. After Indestructible in 2003, Branden Steineckert (drums) joined to solidify Rancid’s current lineup. They subsequently released the albums Let The Dominos Fall (2009) and Honor Is All We Know (2014). And out now is another immediate classic, Trouble Maker (2017).