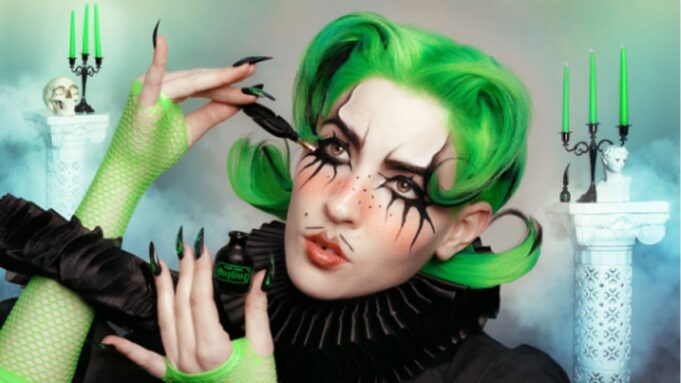 Today, gender fluid popstar Dorian Electra (they/them/theirs) shared a music video for their glam-worthy track “Guyliner.” Directed by Dorian Electra and their long time creative partner Weston Allen, the video sees Dorian take on the ideals of masculinity by shaping and breaking stereotypes. The visuals and outfits in the video were styled by Dorian, with choice looks influenced by neon scene kid and steampunk culture, serving as an ode to trends that came out of the early 00’s Myspace-era. The video features cameos from a noteworthy crew of musicians and artists including Nadya (Pussy Riot), Chester Lockhart, Hana, Smrtdeath, Mood Killer and more.

In celebration of the video, Dorian Electra has announced their very own Guyliner product with part of the proceeds going towards the Los Angeles LGBT Center. This marks Dorian’s first launch into the beauty world.

“I wanted to harken back to the mid 2000s emo/Myspace scene kid aesthetic because that was a really special cultural moment for masculinity that helped make it more okay for “guys” to wear tight “girl’s” jeans, makeup, have “crazy” hair and be more flamboyant fashion-wise in general. The idea of rockstar guys wearing makeup like “guyliner” was definitely something that ultimately made me feel more comfortable wearing makeup myself as a gender fluid person (I wore super thick black eyeliner all throughout high school). For me, makeup is a big part of how I express myself and I love blending feminine and masculine elements together to create looks that draw on my favorite parts of each and everything between.”

Since the release of 2019’s Flamboyant, Dorian Electra has gained a rapidly growing global fanbase with the album recognized in prestigious end of year round-ups from PAPER, VICE, The Guardian, Dazed, The Needle Drop and more. The album is an unapologetically over-the-top work of experimental genre-bending hyper pop with a heavy-metal, baroque twist that tackles issues of masculinity, gender identity, and sex in a potent yet accessible way. Electra has collaborated and toured with pop visionary Charli XCX and Russian group Pussy Riot in Europe and the US as well as Dorian’s own sold-out US headlining tour this past fall. Dorian Electra will be playing shows across North America, Australia, and Europe in their biggest headline tour to date, The Flamboyant Tour: Chapter II.