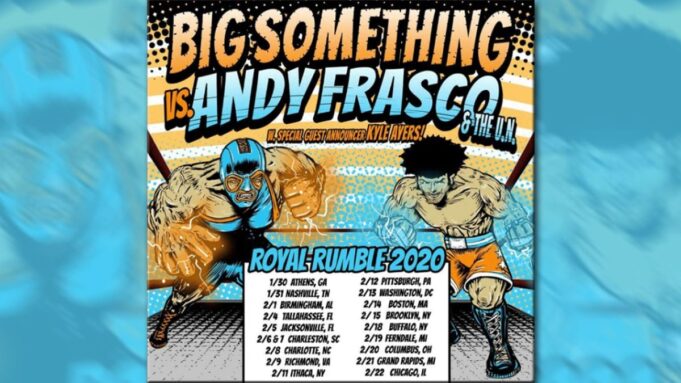 February 9 2020 the city of Richmond welcomed Andy Frasco & the UN vs Big Something at the Broadberry. Photos by Willa Stein, words by Courtney Wheeler

Having grown up in the North Carolina Mountains around music royalty Doc Watson, connecting to an areas local music scene has always been a priority for me. When I moved to Raleigh and began learning about the growing music scene here, the first band I was told was a must see, was a group from Burlington called Big Something. I caught them for the first time in the summer of 2010 and was instantly a fan. I have enjoyed watching their musical journey and the much deserved success they have achieved.

Originally a three piece band from Maryland, and calling themselves anonymous, Big Something came to be in 2009. The now Burlington NC based six piece band, consists of Nick MacDaniels on guitar and vocals, Doug Marshall on bass, Josh Kagel on keys and trumpet, Casey Cranford on sax and EWI, Jesse Hensley on lead guitar and drummer Ben Vinograd. The dynamic band has been steadily making a name for themselves, with a hefty touring schedule including festivals and headlining dates.

I had no clue what to expect from the tour they are touting as the Royal Rumble 2020, I just knew it was going to be a damn good time. Comedian Kyle Ayers was the master of ceremonies and kicked off the show with a 15 minute comedy routine before introducing the bands, pro-wrestling style. Andy Frasco & the UN took the stage first and had the near capacity crowd fully entranced with the ir musicianship and the antics they have become known for.

Each show has bragged surprise guests and Richmond’s own guitarist Andrew Trongone of the Trongone Band joined the band on stage for a killer head-to-head with UN guitarist, Shawn Eckles. The evening’s shenanigans included everything from full on wrestling matches, to crowd surfing and pole climbing, none of which took away from the stellar musicianship and energy of the band of multi-instrumentalists.

As if the audience’s senses were not already on fire, the energy didn’t stop as Big Something took the stage. There is zero doubt this band lives for those two hours on stage as Nick and crew, once again deliver ed a stellar set of original music to a beautifully captive audience. The energy Big Something brings to the stage is undeniable and infectious. Highlights of the set included the Casey Cranford and Ernie Chang saxophone duels on Heavy & UFO’s Are Real and an incredible version of The Devil Went Down to Georgia.

Both bands have new music being released in 2020. Big Something’s forthcoming release, Escape, was made collaboratively in the studio, a first for the band, while Frasco’ s latest, Keep on Keepin’ On focuses on mental health and improving your psyche. The positivity both bands spread through their lyrics is exactly what the world needs right now.

If you get the chance to catch this tour, I can promise you are in for a fantastic time with a ton of surprises. And while Nick and Andy came up with the Royal Rumble theme pitting the bands against one another in a head-to-head competition, the love these two bands have for one another can be felt all over the stage. I for one hope this isn’t the last we see of this pairing, but for now catch the bands together for a few more east coast dates!

Check out the full gallery of photos by Willa Stein from this show here.

Not from this show: