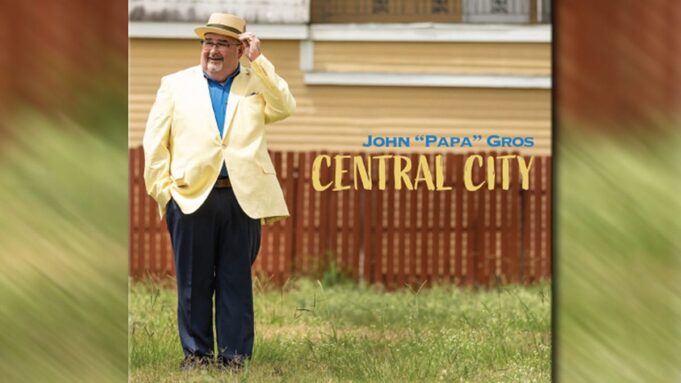 New Orleans native John “Papa” Gros (pronounced “grow”) has been celebrating the Crescent City’s culture with the world for over three decades. His third solo album Central City, out on April 17, is the latest chapter in the singer and pianist’s lifelong tribute to his city’s diverse musical legacy. The album is an upbeat collection of classic New Orleans party songs, both new and old, filtered through Gros’ dedication to his craft.

“Sharing New Orleans with the world is my calling,” Gros says. “That’s what I have been doing, and that’s what I’ll do with the rest of my life.”

In addition to announcing Central City, Gros has shared the video for his brand new song “You Do It.” “The track encapsulates the feelings of true love in New Orleans by referencing musical and cultural icon Dr. John, the funkiest drummer on the planet Zigaboo Modeliste, the Mississippi River and Marie Laveau, all in one catchy chorus,” says Gros. He recorded the song with a who’s who of New Orleans luminaries, most notably George Porter Jr. (bass), Herlin Riley (drums), and Ivan Neville (background vocals).

The old-fashioned vibes of Central City find Gros trading in the Hammond B3 for a Steinway Piano and incorporating a lively tapestry of horns, banjo, and second-line drumming. “Central City is a departure from my other records in that it’s a return to my roots,” says Gros, who gained worldwide renown as a hard-hitting funk organist in his former group, Papa Grows Funk. “This is the tradition of New Orleans, a marriage of classic New Orleans rock ‘n’ roll with traditional New Orleans Jazz. It’s the sounds I heard at every family celebration as a kid.”

Gros’ feel-good originals hold their own alongside his takes on beloved songs by Allen Toussaint, Lloyd Price, and John Prine. The stellar supporting cast, which includes Papa’s former boss, bassist George Porter Jr. (The Meters), as well as drummer Herlin Riley (Wynton Marsalis) and trumpeter Mark Braud (Harry Connick Jr.), has defined the cultural, historical, and musical significance of New Orleans for generations. Together, they skillfully explore the similarities between New Orleans jazz and early rock ‘n’ roll on songs such as “Yeah Yeah Yeah” and “Personality.” With exquisite songwriting and pristine musicianship, Central City is sure to lift the spirits of everyone, from lifelong New Orleans music fans to revelers looking to have a good time.

“I’m walking in the same path [as Dr. John, Allen Toussaint, and Art Neville,]” explains Gros. “I’ve been following them my whole life. Now, they’re no longer in front of me. They’ve gotten off the path, but the path is still very clear.”

JPG will play a pair of hometown gigs this month before embarking on a spring tour that culminates at the New Orleans Jazz & Heritage Festival. A full list of tour dates can be found below, with more to be added.

Drop us a line at [email protected] with your live music news and live show review.