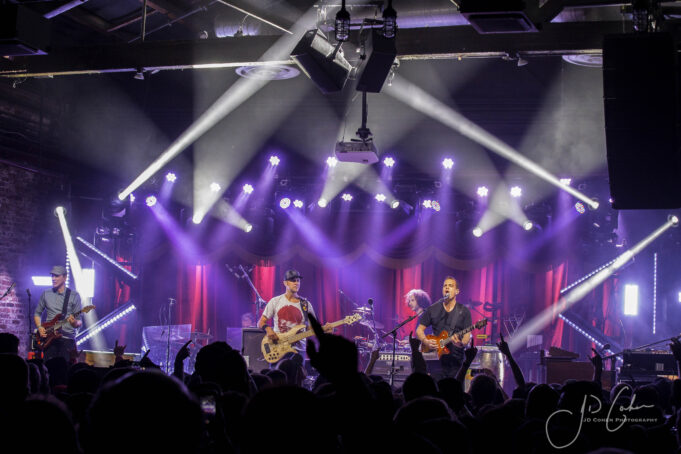 One special night at the Brooklyn Bowl in NY, January 19, 2020 by JD Cohen

After an impressive two night stand at the Capitol Theatre in New York, Umphrey’s McGee made a triumphant return to the Brooklyn Bowl on Sunday January 19, 2020. Shows at the intimate and exceptional Brooklyn music club and bowling alley always have a special quality about them, especially when seeing tremendously talented bands like Umphrey’s McGee who more commonly play much larger venues. Clearly a beloved spot for many bands, Sunday night’s show by my calculations was the 9th time the band has played the venue since 2011.

According to someone close to the band they enjoy the energy of the smaller room especially on an off night after playing larger rooms. Fans also clearly appreciate the rare opportunity to get closer to the band with an opportunity to more directly feel the power and energy they generate. Needless to say, spirits and expectations were high as dedicated fans poured into the Brooklyn Bowl hours before the sold out show, staking out prime spots at the front and side of the stage to see their favorite band. On this night, the band brought their full complement of lighting and sound equipment which packed the tiny stage. A special control booth was set-up to the right of the stage spilling over into the bowling alley, where two bowling lanes were reserved for the band’s crew.

Most of the usual suspects crammed the first few rows in front of the stage, many of whom had attended the previous nights shows at the Beacon and were still glowing from the experience and looking to extend the weekend and cap off the exceptional New York City run for one more great night of music. By many accounts, the Beacon shows were some of the best New York shows in recent memory. The band took the stage at approximately 8:30. It didn’t take long before the band was rocking full throttle and the room was bouncing with ecstatic fans. A short “Looks” with its pounding beat and nice guitar shredding from Jake Cinninger started the first set. “The Fussy Dutchmen” follows opening with a shout out to front row center denim clad Dan Harriman. The song starts with a tease of Rush’s “XYZ” fooling fans into thinking they would be treated to the third Rush cover of the weekend.

“Maybe Someday” kicks off with some comments from Brendan Bayliss about the Royal Family. This turns out to be a somewhat recurring joke throughout the night. Things really got moving during the 11:00 minute “Got Your Milk (Right Here)” which included some funky and beautiful jamming that took full flight at about the mid-way point in the song. The band segued into the Zappaesque “Walletsworth” without missing a beat. “Domino Theory” took another dive deeper into what was the heart of the first set and the finest moments of the show. Getting dark and sinister behind the monster riffs, funky bass and edgy vocals the band was clearly feeding off the energy of the audience. The room was throbbing as the band brought the energy full tilt, dropped down to a slow tempo before rising and speeding up again to the excitement of the crowd. The high energy sinister jams and intensity was sustained in the final segment of the first set that included “Miss Tinkle’s Overture” into “Tribulation” and LCD SoundSystem cover (which was last performed for the first time by UM in Denver during the 2019 New Year’s run) and back into “Miss Tinkles Overture.”

The second set had a much lighter and and less sinister feel kicking off with the early classic Umphrey’s “Front Porch” intro into an extended “Resolution” and back into an additional 13 minutes of “Front Porch.” Sticking with the theme and the more lighthearted vibe, the casual and slowly building “40’s Theme” followed. “Miami Virtue” showed off some of the band’s harmonies and highlighted Joel Cummins synth keyboard textures. The sound of “40’s Theme” is moody and atmospheric like something from a sci fi soundtrack. It was probably the spaciest the band got all night. “Out of Order,” “Gulf Stream,” and “The Floor” all came in quick succession. “Gulf Stream” was a particularly beautiful tribute to the intimate crowd, and the love in the room was palpable. Friends embraced and exchanged knowing looks as the band sang, “All my friends are here right now and this is what we came to do, All my friends are here right now and they could be your friends too, New York City, NEW YORK CITY!”

The band came back for a short encore of fan favorite “Phils Farm” transitioning into the new single “Suxity” and back into the show closing “Phils Farm.” Although this night may not have had some highlights of the Beacon performances the two previous nights, the joy of seeing a band as talented and engaging as Umphrey’s McGee in a venue like the Brooklyn Bowl is something truly special and likely sent everyone off at the end of the night with a big fat smile and the feeling that they had been part of something truly special.

From the NYC show the night prior:

Drop us a line at [email protected] with your show review or live music news.