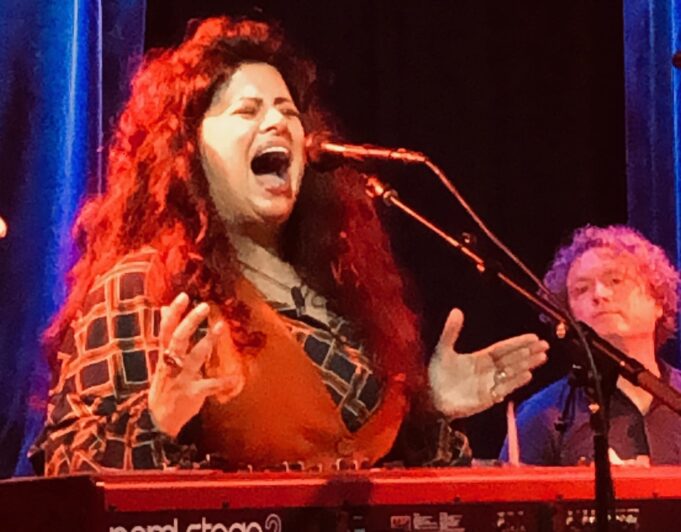 A local neighborhood venue The Write Off Room in Woodland Hills, CA on Sunday, January 19th showcased the undeniable talent, musical chops and vocal powerhouse stylings of Sony/Orchard recording artist Sayed Sabrina. The diminutive singer/songwriter has been compared to Shakira and Janis Joplin.

Sabrina has a huge, epic sound that also echoes and recalls the towering emotional delivery of Laura Nyro, best known for her free-form compositions and poetic lyrics drawing on gospel and soul. Sabrina is influenced by soul, blues, jazz and rock. Her phrasing is equally diverse and eclectic as Nyro’s which creatively accents the songs and their off-kilter arrangements. They are fresh, experimental and offbeat.

Promoting her latest CD, “Thou Art That,” the audience was introduced to memorable characters from all walks of life, often desperate, struggling, and down their luck, but there were also hopeful, positive and uplifting messages in her songs. “Goody Two Shoes,” garnering nearly a million playlist followers on Spotify, was one of the many set’s high points of the 12 song featured in the show including “Pedestrian,” “The Devil And The Good Lord,” “Free Consciousness,” “In The Mouth Of The Serpent,” and more.

Sayed Sabrina is a pro who owned the stage. She has a fun, bubbly, and feisty personality. The curly, raven haired entertainer engaged consistently with the crowd throughout the set, whether she was doing double duty singing and playing keyboards, or just singing at the mic and dancing around the stage, and cutting loose physically throwing herself into the music.

Playing on the same bill and stage as B.B. King, Los Lobos, Jimmy Cliff, Dr. John, Leon Russell, and The Temptations, to name a few, has served her well, honing her craft and upping her “game” performance-wise. Sayed Sabrina was backed by a group of accomplished and gifted musicians in their own right including guitarist Chris Gauthier, bassist Scott Johnson, drummer Bryan Head, and trumpeter Brad Black. They also played on her latest CD and will accompany her on an upcoming Southern U.S. tour.

From there, she will continue to grow her audience and gain new fans blowing, them away with her memorable and powerful stage show marked by the immediacy of the raw fiery emotion and power she projects and emits onstage.