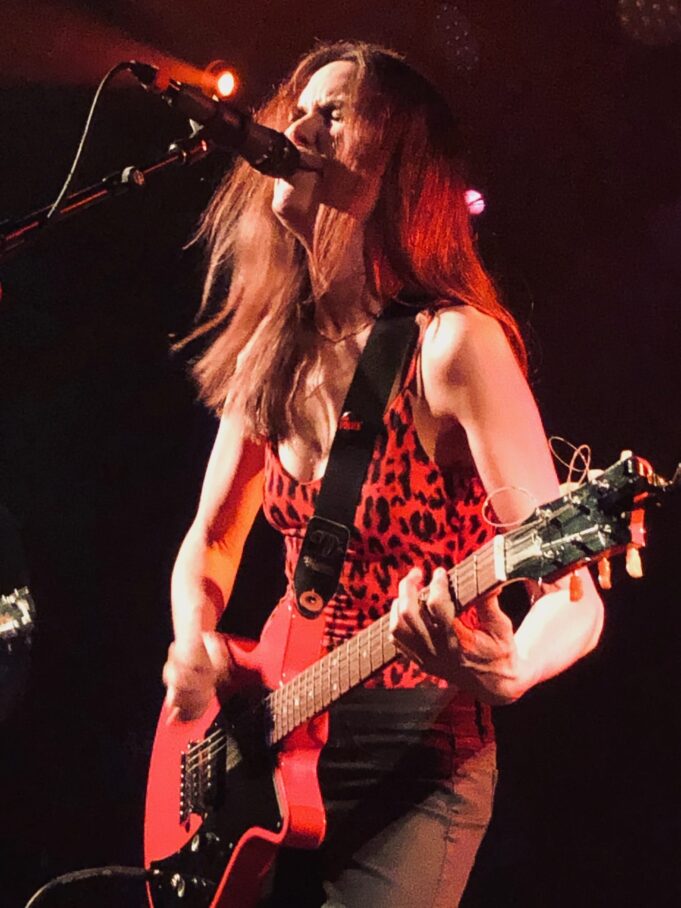 At the Echoplex, Los Angeles, CA January 27, 2020 by Harriet Kaplan

Juliana Hatfield is a legend and icon in the indie rock world. The Boston, MA native has been in several lauded bands since the late 1980s. The Blake Babies, Some Girls, and The Lemonheads to the Juliana Hatfield Project as well as her own solo career are among them.

Hatfield is an incredibly prolific singer/songwriter/musician. She’s released 18 albums that are intensely personal works marked by a meticulous attention to songwriting craftsmanship. Her guitar playing can be clean and articulate, but also fuzzed-out sounding and thoroughly rocking with a distinctive edge. Her hallmark is creating unique, off-center, dissonant arrangements that are melodic and catchy. The songs are anchored by her endearingly girlish voice which gives the material their emotional grit, depth and perspective. Hatfield also infuses the songs with her own original wry sense of humor.

At the Echoplex last week in Los Angeles, CA, along with Dean Fisher on bass, Mike Oram on guitar and Chris Anzalone on drums, the Juliana Hatfield Three played as a four-piece band and it was pure sonic bliss. The high-energy and satisfying show was a lot of fun. It was jam packed with a vast set list of 20-plus songs.

Hatfield’s creative output over the past thirty years featured cuts as far back as her 1992 solo debut album, Hey Babe, and a bit of everything in between, to Weird, released last year as well as the eclectic covers projects: Juliana Hatfield Sings Olivia Newton-John and Juliana Hatfield Sings The Police. “Everything’s For Sale” and “Lost Ship” from Weird were standouts.

Hatfield’s harder edged and revved-up rendition of Olivia Newton-John’s “A Little More Love” took the song to a whole other level giving it more angst and tension. The Police’s “Hungry for You (J’aurais toujours faim de toi)” in Hatfield’s hands sounded more soul and torch accented. The “De Do Do Do, De Da Da Da” was a total crowd pleaser eliciting audience participation and the same with the incredibly popular “Roxanne” that couldn’t help but result in the requisite sing-a-choruses from the crowd.

For longtime fans of Juliana Hatfield, this show offered something for everyone. It mined decades worth of original material from past and current work weaving it in with reworked cover songs that held an important meaning for Hatfield growing up but now also resonate for her in the present moment.

Feelin’ Taxachusetts
Dame With A Rod