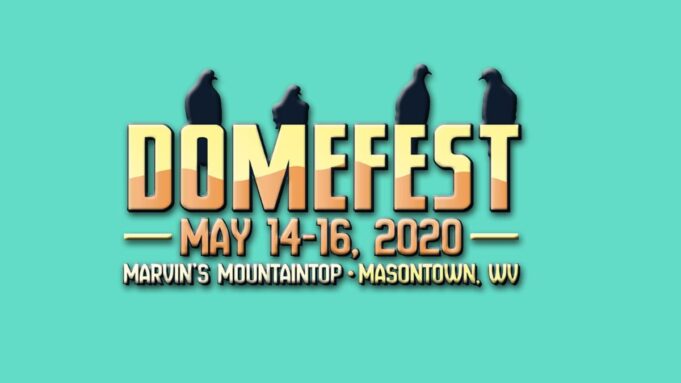 The final lineup for the 11th annual Domefest—taking place May 14-16, 2020 at Marvin’s Mountaintop in Masontown, WV—is here!

Alongside five sets by hosting band Pigeons Playing Ping Pong and the already shared initial lineup, come new additions including a once-in-a-lifetime collaborative set by “TAUKing Pigeons,” featuring members of TAUK and Pigeons Playing Ping Pong. Additionally, TAUK has been added as a headliner on the bill, plus sets by Funk You, West End Blend, DIZGO, Eggy and Chalk Dinosaur to round out the complete 2020 iteration of the increasingly beloved music festival and campout.

TAUKing Pigeons lands on the heels of their recent collaboration during this past New Year’s Eve celebration in Asheville, NC. The evening was dubbed “The Electric Kool-Aid Asheville Test,” and starred members of both bands performing the music of Kool & The Gang and Jimi Hendrix, among other tunes fitting of the night’s theme. If that brief collaboration was any indication, attendees are in store for a very special treat at Domefest.

“We both had so much fun jamming together on New Year’s,” said Pigeons Playing Ping Pong frontman, Greg Ormont. “After the show, we all were like ‘we have to do more of that.’ No better place to do so than at Domefest, where a lot of our fans first discovered TAUK back in 2013.”

Other lineup highlights include performances by first-timers Spafford and SunSquabi, plus sets by Aqueous, Magic Beans (x2), lespecial, LITZ, The Fritz, recently reunited fan-favorites Broccoli Samurai, and the second appearance of The Domefest All-Stars, a collaborative set featuring a never-before-seen cast of past and present Domefest alumni. It may also be the only opportunity of the summer to catch Pigeons Playing Ping Pong’s side projects Scrambled Greg, Schwa and Puremotion.

As in past Domefest tradition, festival attendance is capped to maintain the intimacy fans have grown to cherish over the past decade. Domefest takes pride in its close-knit community and aims to curate a warm and welcoming annual celebration, where new friendships are formed, long-lasting bonds are made and fans have the unique opportunity to engage with some of their favorite artists on the festival grounds throughout the weekend. Limited tickets are still available but moving quickly, and fans are encouraged to secure their passes now before prices increase.

Drop us a line at [email protected] with your festival previews, live music news, and show reviews.