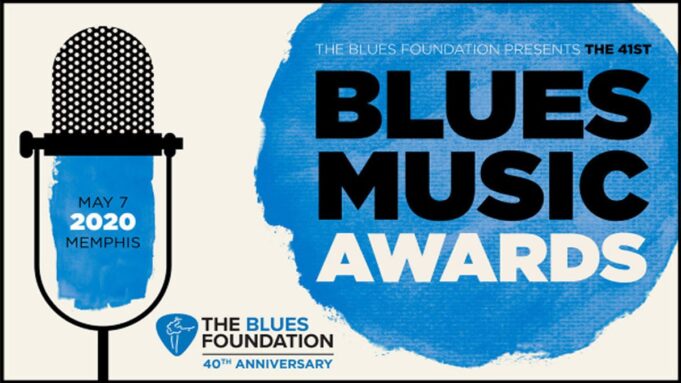 Winners to be Revealed May 7th at Memphis Gala Ceremony

An impressive assembly of blues music masters, ranging from Blues Hall of Famers to rising stars, will gather in Memphis on Thursday May 7, for the 41st annual Blues Music Awards. Presented by The Blues Foundation, the BMAs honor the past year’s exceptional achievements in blues music recording, performance, and songwriting, as well as supporting the blues’ rich cultural traditions. This celebratory evening, recognized internationally as the blues world’s premier event, not only attracts nearly all the nominees, but also presents them in performance.

The event takes place at Memphis’ Cannon Center for the Performing Arts (255 North Main Street), where a Blue Carpet will lead to the theater. Doors open at 5:30 p.m., with the ceremony commencing at 6:30 p.m. sharp. Tickets range from individual seats for $80 to full boxes of 10 for $2,500 per box, with most seats being at a $150 per person price point. All tickets (unless otherwise noted) include admission to the post-show After Party, which will feature additional live performances by nominees, buffet dinner, cash bars, and more festivities. The After Party takes place in the newly renovated Grand Lobby of the Renasant Convention Center, which is attached to the Cannon Center via an indoor walkway.

Topping the list of talented BMA contenders are Rick Estrin and his band Rick Estrin & the Nightcats, with eight nominations. It’s a familiar situation for Estrin and the group as they garnered eight overall nominations two years ago, which led to a trio of BMA victories (Band of the Year, Song of the Year, and Traditional Blues Artist). This year, they are again up for their 2018 winning categories along with Contemporary Blues Album (for their aptly named Contemporary). Additionally, Estrin has earned B.B. King Entertainer of the Year and Instrumentalist: Harmonica nominations, while guitarist Christoffer “Kid” Andersen and drummer Derrick D’Mar Martin are in the running for their respective instrumental categories.

Just behind Rick Estrin & the Nightcats in the nomination count is Sugaray Rayford. Last year’s Soul Blues Male Artist is not only attempting to retain that title, he’s also nominated for the B.B. King Entertainer of the Year, Soul Blues Album (for Somebody Save Me), Instrumentalist: Vocals, and with the Sugaray Rayford Band for Band of the Year, while “Time To Get Movin’,” penned by Somebody Save Me’s producer Eric Corne, is competing for Song of the Year.

The Cash Box Kings and Christone “Kingfish” Ingram both are hoping to rule the BMAs too as each act nabbed a handful of nods. Ingram is one of the fastest rising stars in the blues scene, so it’s no surprise finding his name in the Best Emerging Artist Album category. Kingfish, however, also has earned nominations for Contemporary Blues Male Artist and Instrumentalist: Guitar, and his album Kingfish is up for Traditional Blues Album and Album of the Year. Midwestern titans The Cash Box Kings are also competing for Album of the Year and Traditional Blues Album (for Hail to the Kings!), as well as Band of the Year. Their recorded song “The Wine Talkin’,” written by Joe Nosek, John Hahn, and Oscar Wilson, is up for Song of the Year honors, while band member Kenny “Beedy Eyes”Smith is among the contenders for Instrumentalist: Drums.

Chicago blues stalwart Billy Branch also has picked up numerous nominations. His album with The Sons of Blues, Roots and Branches: The Songs of Little Walter, is in the battle for Album of the Year and Traditional Blues Album while Branch is nominated for Instrumentalist: Harmonica, Traditional Blues Male Artist, and B.B. King Entertainer of the Year, where he is facing Estrin, Rayford and Blues Hall of Famers Mavis Staples and Bobby Rush. However well he does at the BMAs, Branch is guaranteed to have a triumphant 2020 as he will be inducted into The Blues Foundation’s Blues Hall of Fame the day before the Blues Music Awards along with Bettye LaVette who is nominated for Soul Blues Female.

The 2020 nominations prove that the blues is very much alive and well. In addition to Kingfish’s five nominations, numerous award nominations are also going to young blues artists, including Jontavious Willis, nominated in two categories (Best Emerging Artist Album and Traditional Blues Album, for Spectacular); Larkin Poe, nominated for Band of the Year, with band member Rebecca Lovell receiving a nod for Song of the year for “Beach Blonde Bottle Blues”; Samantha Fish, up for Contemporary Blues Female Artist; Annika Chambers, trying to reclaim her Soul Blues Female Artist Award; and 2018 Best Emerging Artists Southern Avenue, nominated this year in the Soul Blues Album category for Keep On.

The day before the BMAs, The Blues Foundation’s Blues Hall of Fame Induction Ceremony takes place Wednesday, May 6, at Memphis’ Halloran Centre at the Orpheum (225 South Main Street). Following a 5:30 p.m. cocktail reception, the inductions begin at 6:30 p.m. in the Halloran Theater. Tickets, which include ceremony and reception admission, are $75 each and, as with any other musical event or charitable donation, they are non-refundable. Tickets to all Blues Music Awards week events will be available at Will Call only; pick-up location information will be released one week ahead of the Blues Music Awards.

The complete list of Blues Music Award nominees can be found below and on The Blues Foundation’s website. The ballot will be open for voting by current Blues Foundation members only until 5 p.m. CST on Friday, February 28.  To become a Blues Foundation member, visit blues.org and click on the Join button to learn about the different membership levels and how to easily and securely join online. Upon membership confirmation, new and renewing members will be sent instructions on how to access the 2020 Blues Music Awards Ballot.

The Blues Foundation is a world-renowned Memphis-based organization whose mission is to preserve blues heritage, celebrate blues recording and performance, expand worldwide awareness of the blues, and ensure the future of this uniquely American art form. Founded in 1980, the Foundation has approximately 4,000 individual members and 173 affiliated blues societies representing another 50,000 fans and professionals worldwide. Its signature honors and events — the Blues Music Awards, Blues Hall of Fame inductions, International Blues Challenge, and Keeping the Blues Alive Awards — make it the international hub of blues music. Its HART Fund provides the blues community with medical assistance for musicians in need, while Blues in the Schools programs and Generation Blues Scholarships expose new generations to blues music. The Blues Hall of Fame Museum, located in Downtown Memphis, adds the opportunity for blues lovers of all ages to interact with blues music and history. Throughout the year, the Foundation staff serves the global blues community with answers, information, and news.

Album of the Year, Sponsored by Rum Boogie Café and Blues Hall
Church of the Blues – Watermelon Slim
Hail to The Kings! – The Cash Box Kings
Kingfish – Christone “Kingfish” Ingram
The Preacher, The Politician or The Pimp – Toronzo Cannon
Roots and Branches: The Songs of Little Walter– Billy Branch & the Sons of Blues