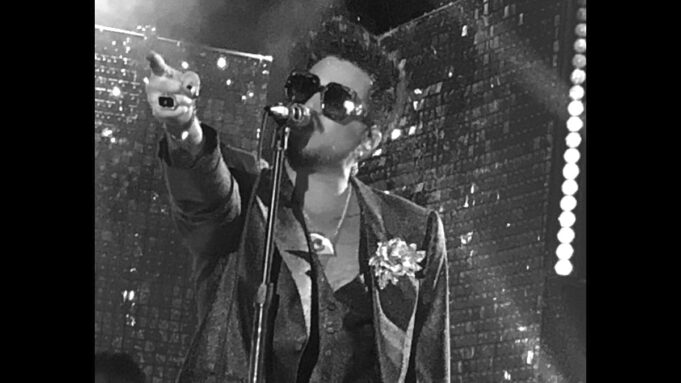 The dynamic Adam Lambert has talent in spades. Lambert has a tremendous and versatile voice that can reach sublime heights with a melodic, smooth, and powerful falsetto and can pull off with ease an earthy, raw, gusty singing approach that can fit comfortably and credibly around most genres of music.

The handsome singer has a great, original look, and possesses an undeniable sex appeal to burn and his mischievous and devilish personality oozes with charisma. His mere presence on the stage at the El Rey Theater on December 2st in Los Angeles, CA caused excitement and pandemonium among his devoted and passionate fan base affectionately known as Glamberts. Intentionally or intentionally, Lambert’s own clothing reflected the spirit of the holiday season bearing a bit of a resemblance to a human Christmas tree. He wore shiny forest green suit with a prominent, large silver corsage on his lapel that looked fabulous and matching green eyeshadow that accentuated his already striking and gorgeous eyes. Lambert had no shirt on and his chest was layered with so much sparkling, bling-worthy jewelry that you couldn’t help but see it from far away from the stage that it be described as blinding.

Stylistically, the audience seemed to be in competition with one another upping their own fashion game with many wearing their glitter/glam accessorized outfits and leopard/animal print combinations. The beyond excited crowd literally squeezed onto the GA floor of the 700-capacity venue for this sold-out show.

Check out the full gallery of photos of this show by Harriet Kaplan here.

Lambert was promoting his new “Velvet: Side A” EP, characterized by a funk-driven, rock sound that taps into R&B, disco and dance-pop music. The former American Idol contestant and Queen’s permanent frontman delivered a strong, well-paced set with high-energy, upbeat numbers and slower, mid-range material. From the new EP, Lambert played “Superpower,” “Overglow,” and “Closer To You.” He also played “For Your Entertainment,” “If I Had You,” and “Whataya Want From Me,” a top-ten hit co-written with Pink from his debut album.

Also featured was Lambert’s lively and emotionally-charged version of Cher’s “Believe” and Queen’s “Another One Bites The Dust.” The sensational show closed with a beautiful and jaw-dropping version of Charles Brown’s classic “Please Come Home For Christmas” that he truly made his own. This rendition is right up with Mariah Carey’s “All I Want For Christmas” for legendary status.

Lambert was supported by his wonderful band including the distinctive and phenomenal artist in her own right “Idol” rival and friend, Allison Iraheta, on backup vocals.

Adam Lambert gave his all during this rare solo show. The size of this venue didn’t seem to matter given some context as a contrast since he has gone on to play for hundreds of thousands people in stadiums throughout the world touring with Queen. Because of that epic exposure and life-changing career experience, it’s obvious Lambert has further refined and honed his craft as this show was professional and slick to a point, but it had enough unbridled swagger, sass, and playfulness, to keep it feeling fun and loose, too.

Check out the full gallery of photos of this show by Harriet Kaplan here.

Drop us a line with your live show review, festival preview, or live music news story at [email protected]