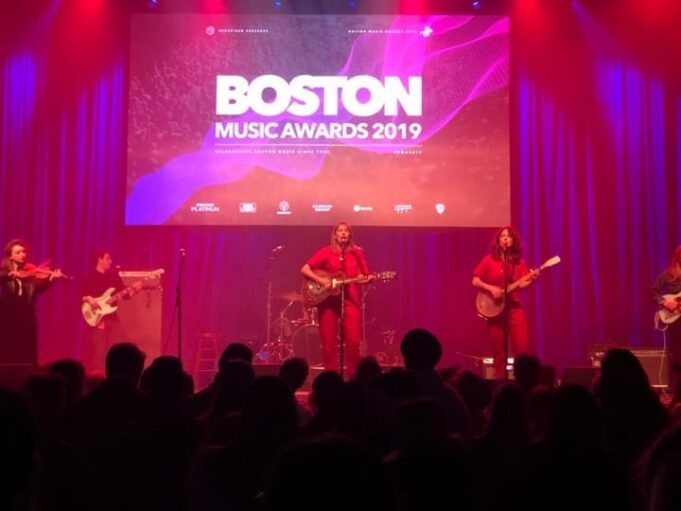 The Boston music scene is on another uptick thanks to Paul Armstrong, owner of the Boston Music Awards who is bringing back the annual ceremony to the relevancy it once had when Candace Avery created the ceremony in the 80’s.

The relatively low key sold out event was sporadically littered with impressive performances by some of Boston’s finest performers. Some of the most impressive performances came from Hawthorne. The instrumentation and harmonizing within the group is enough to put you in a trance and in a place where all you can hear is the band on stage performing flawlessly.

The dark wave electro pop of House of Harm reverberated like a thunderstorm throughout the venue. Their dedication to the song shined through, and they were a nice vision as to what’s to come in local music and beyond.

Walking through the packed House of Blues, it was refreshing to see musicians of all genres represented and industry persons mingling with one another catching up or meeting for the first time. The community was present, and it would be even better to see support for each other more than once a year.

There seemed to be a bigger focus on New England hip hop than in years past, and based off of local success, maybe too much of a spotlight was on the particular genre. Boston hip hop has had its hills to climb for sure, but there is still much work to be done to bring it back to the national and local relevance it once had.

The representation of local hip hop onstage stole the show with Brandie Blaze killing it on the mic showing who’s boss woman in town and why all eyes need to be focused on this rare talent.

Social media ghost and relative unknown Jefe Replay came out swinging in all directions announcing his arrival on the big stage. He performed as if the stage was his and his alone, and the audience reacted by bouncing vicariously to his ferocious rhymes. His was hands down the best performance I’ve seen at the awards in years. It’s hard to find anything on him online, but onstage he lets everyone know exactly who he is.

The most heart warming performance came from Eddie Japan and Greg Hawks of The Cars and their tribute to the recently passed Ric Ocasek. Their opener “Let the Good Times Roll” had musicians from every genre singing back the local icon’s inspiring lyrics.

The future for Boston music and this awards show is bright. It would be nice to harken back to original awards shows and see more bands who broke into the national scene. Artists like Clairo, Joyner Lucas, Ripe, Juice, Sydney Gish, Ballroom Thieves, Darlingside, Lost Kings, Juliana Hatfield, and so many more share the stage with the up and comers like Phish, Aerosmith, Bell Biv DeVoe, Belly etc…once did, and one can hope that those performances are right around the corner.

The night that shines a light on those who keep music alive in Boston is as important as the artists that keep it alive for the past, for now and for the future.

Drop us a line at [email protected] with your review or live music news story.