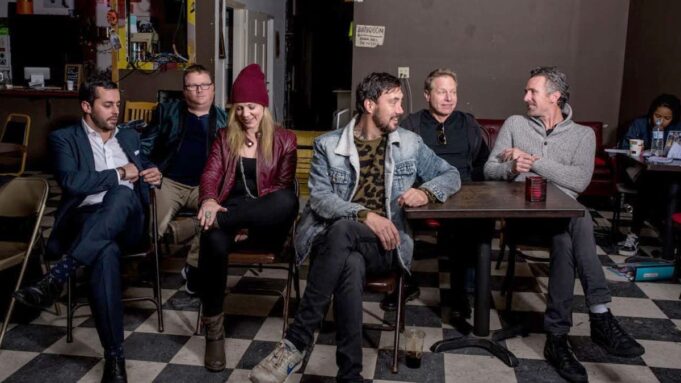 Rustic Overtones, the seven piece rock band from Portland Maine has been a veritable musical institution in New England since their founding in 1994. The band built a strong international audience with their unique version of soul and horn infused garage/indie rock.   In their twenty-five years as a band they have released seven albums and have collaborated with the likes of David Bowie, Imogen Heap, Ray Lamontagne, Eric Krasno, and Naughty By Nature to name a short few. Since signing with legendary record mogul, Clive Davis 1999, Rustic Overtones remain “a triumph of music over music industry.”

In March of 2019, the band received news that trombonist and founding member, Dave Noyes, had passed away unexpectedly.  The band had been in the studio loosely working on new music leading up to the tragic event. In the wake of Dave’s passing, the members of Rustic Overtones, led by lead singer and songwriter Dave Gutter, decided to fulfill Dave’s Noyes original musical vision for the album, which was to create a modern take on late 60’s and 70’s era Brazilian psychedelia.  The band spent the last few months finishing the album and are proud to honor their fallen band member with the release of their eighth studio album.

“This album is unequivocally dedicated to our band mate, Dave Noyes 1973-2019. Dave had a vision for this album. Brazilian Psychedelic Rock. If you’re unfamiliar I insist you dig in. It’s a rabbit hole of incredible music and history.

Beginning in the 1950’s there was a movement of Brazilian artists that were heavily influenced by American Rock n Roll. The youth of Brazil at this time were under political, sexual, and educational oppression, as Brazilian society had been based on the standards and rules of the Catholic church and the dictatorship of the Fifth Brazilian Republic. Brazilian Psychedelic music was rebellious, loud, and in many cases, illegal. Many of the bands existed in secret and recorded entire catalogs of music that were not only underground, but in some cases, never even released until decades later.

These albums were self made in every way- Lo-fi, elaborate, and exclusively for the love of music and expression. As grandiose as “Abbey Road” and as visceral as “Never mind the Bollocks,” this was a limitless genre of music, a melting pot of so many styles. When Samba and Tropicalia bands emulated American rock music, they still had foundations in Brazilian instrumentation and feel.

American music was also beginning to incorporate classical, middle eastern, and reggae into their sound in the 60’s. I imagine these early Brazilian rock recording session as a clandestine liberation. Their makeshift studio’s their sanctuaries. Banned by the government, these were albums lyrically rich with themes of anti-establishment and a riotous attitude. In the end, I feel like what we took most from this style of music was the mindset and freedom to go anywhere we wanted. And the inhibition to do so. The story of Brazilian rock was brave and inspiring. In preparation for this album, we studied the works of Brazilian psychedelic artists from the 1960’s to present day. Artists like Os Mutantes, Caetano Veloso, Jorge Ben, and Lucas Santtana were in heavy rotation.

In the middle of this journey, we lost our closest friend and musical true north, Dave Noyes. Dave was the one who first told us about Brazilian Psychedelic music and it’s beautiful story. To finish the album, we used ideas that Dave had recorded into the voice memo on his phone. Some of the songs are us playing along to Dave’s demos and practice tapes “as is” in all it’s Lo-fi glory. We also couldn’t bring ourselves to cut out any parts of the album that had Dave talking in between takes. It was comforting to hear and gave us the sense that he was there with us.

We hope you enjoy the album, and we are confident that Dave Noyes would be proud of his vision realized by his closest musical companions. DMFN forever.”

Drop us a line at [email protected] to submit your review of live music news story, feature, or event preview.