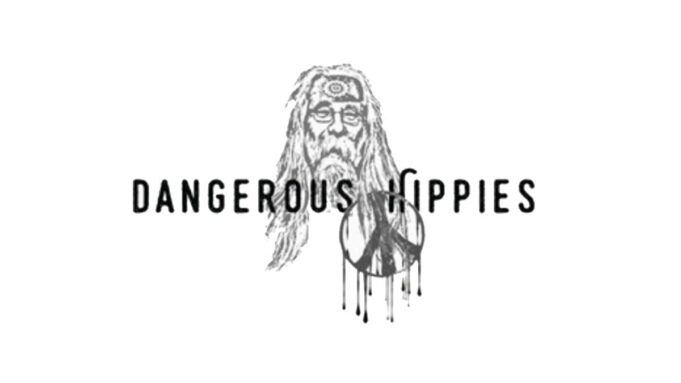 Hinder drummer Cody Hanson and frontman Marshal Dutton have announced a new project under the moniker, Dangerous Hippies. The idea for the new band unofficially started in 2011 when the two were working as a songwriting/production partnership, before Marshall joined Hinder.  They were approached to write a song for a commercial that was similar to The Black Keys. Once it was finished and they started to share the end result, the feedback from friends inspired them to continue. Cody Hansen says: “We were very inspired and were having a blast, so we decided to write more in the same style. It seemed to come naturally and since it had a more raw feel, we could spend more time on writing and less time polishing in the studio.”  Over the years the sound has grown and evolved into a mixture of several styles with elements of rock, pop, hip hop, folk and reggae letting the duo spread their songwriting wings beyond the active rock they are best known for.

Today the band release their debut single Woah available on all streaming platforms.

Hinder fans should not be worried says Hanson, “Dangerous Hippies was never intended to be a replacement for Hinder. Hinder will continue to tour. However, Marshal and I feel that we have grown as songwriters and producers. We don’t want to be stuck in the box of the “active rock” genre forever. We feel that it’s time to get some of the music that we’ve been working on for so many years out to the world.”

The guys have more than a full album’s worth of material and are constantly writing. Since the music business has evolved so much since the early days of Hinder, they know the process of building a new project has changed significantly. Hansen adds, “We don’t want this to be just another side project that releases a song/album and then disappears. We plan on taking the time to build this the right way and to build the fan base that will appreciate this new style of music.”

More about Hinder
The band formed in 2001 and have remained at the top of their game supported by a solid and steady fanbase. The proof is in the numbers, selling over 4 million albums and 10 million singles and amassing more than 150 million video views. The band has also seen more than 100 million streams and growing.

As one of the few rock bands to grab massive crossover success, Hinder’s 2005 debut album, Extreme Behavior, climbed to #6 on the Billboard 200 chart and was the 2nd Top Rock Album. ‘Get Stoned’ would be the album’s first radio single, climbing to a #4 mainstream rock spot. What followed would end up being one of the biggest songs of the year, ‘Lips of an Angel’, which peaked within the top 10 across several Billboard singles charts, including #1 at Top 40 and Pop 100. Extreme Behavior has since been certified 3x Platinum. In 2008 their sophomore effort, Take It To The Limit, surpassed their debut by peaking at #4 on the Billboard 200 and hitting the Mainstream Rock chart at #3 with single ‘Use Me.’ This solidified Hinder as the biggest new breakout rock act and catapulting them into packed arenas worldwide with the likes of Aerosmith, Mötley Crüe, Nickelback, 3 Doors Down, Papa Roach, and many others. Hinder proved consistent record hit making by following up with a #1 Top Modern Rock/Alternative Album, All American Nightmare (LP 3), and a #3 Top Hard Rock Album, Welcome To TheFreakshow (LP 5). Hinder will have some new announcements in 2020.

Drop us a line at [email protected] with your review or live music news story.