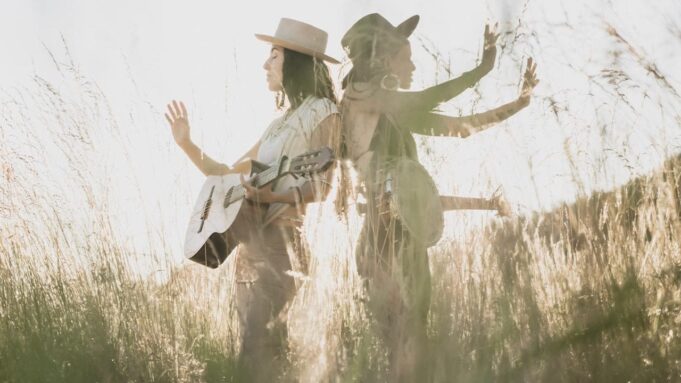 Now, Rising Appalachia is promoting its latest album, Leylines, and has upcoming show at The Troubadour in Los Angeles, CA on October 15th.  Live Music News and Reviews recently had a chance to talk via email interview to Chloe Smith to discuss Leylines in more depth, the sisters songwriting approach, their community work including singing at Standing Rock and much more.

LMNR: What inspired the creation of Leylines

Leylines is the collection of our stories and journeys living and traveling through this country and around the world throughout the past four years.  The actual definition of a leyline alludes to magnetic points of spirit, energy, history, and power in various parts of the world.  Unique connections that are more subtle than linear, if you will. We always sense connections between far removed places, and our album is a reflection of that with the layering of Appalachia, Ireland, and West Africa.  We wanted to weave lines of connections aurally with both traditional music from those places as well as contemporary lyrics that speak to where we are at as a country, as a band, as women, as artists in this place in time.

LMNR: Did the band go into the studio with a different approach or idea with regard to the album conceptually?

Yes, indeed we did.  For the first time, we ventured OUT of the South to record this album… picking an intimate and rustic live in studio perched above the Pacific Ocean just north of the Bay.  The sounds and natural landscape of that place influenced our recording style and the mood we brought into the studio. Additionally, we brought in a producer for the first time, Mr Joe Henry, after over 10 years of producing our music internally. He helped loosen some of the intensity of the recording experience and brought some deep swagger and knowledge of many folk legends into the room, which we celebrated well together. Most of the songs were recorded live, more or less, and we let go of the idea of perfection and wanted to capture more of a sense of aliveness and vitality of music being played in a room.  Not a lot of smoke and mirrors with this recording.  It’s stripped back and rather raw, but at the same time captures us at a rather high musical peak.

LMNR: How did the band come to work on with Ani DiFranco, Trevor Hall, and Maurice Turner on Leylines?

We met Ani Difranco at one of our favorite festivals in North Carolina, and we share a sound crew member as well.  Being long time fans of her work both musically and with activism, we planted the seed years ago to one day work together on a song or a show. It was a dream, really. After playing a song on stage with her at the festival, we just reached out a few months later and inquired if she might record vocals on our track “Speak Out.”  She agreed, we were floored, and it all came together beautifully with her signature style of playful and deep harmonic vocal play.  It’s a true honor to have her featured.

Mr Maurice Turner is a long time friend and cohort from down south. We met many moons ago in New Orleans and have been allies and collaborators since our very first album…. which he helped immensely get off the ground.  His trumpet playing is featured on every single one of our albums, and we love having that common thread throughout our work.

LMNR: Are the songs a collaborative effort?

My sister and I write all the material, and the musicality of the full body of work is definitely a collaborative effort between all our band members.  Each one brings a unique sound and idea to the table, which we work out together and refine along the way.

LMNR: Does the band have a main songwriter?

My sister calls me the faucet and wants to sell me to Nashville (hahaha), so yes, I suppose that would be me.  I write a ton of songs for the band, and a ton that don’t make the cut.  We also collaboratively write a lot together, and she of course writes her own too.  We have a complimentary yet different style and leave room for one another’s touch in the songs we write.

LMNR: How would you describe the evolution of the band’s sound over the last two decades in the music industry?

Honestly, we have refined our craft and grown as a band, but we have really stayed true to our original style of stripped down, southern based, urban, global folk music.

LMNR: What are some of the high and low points of your career?

A high point has always been when our music reached beyond the stage into community work.  We sang at Standing Rock in solidarity with the water protectors there, as well as at the largest male correctional facility in Colorado last year. Both of those memories and connections with people doing hard good work will stay with us forever. The hard points are always when we feel disconnected from the earth or the communities we pass through.  The full days spent in transportation or traversing cities too quickly without a moment to catch our breath. That style of touring has never served us, and we do our best to follow our Slow Music Movement and be intentional about how we travel.

LMNR: What would you do differently if you were just entering the industry today?

I would collaborate more from the jump with other artists that are on the path.  I’d also speak to my younger self to remind her to take it easy and enjoy the ride, because the business and professional sides of this work come in quick.  The joyful moments of early music making are some of the strongest to hold on to.

LMNR: How much did growing up in an artistic family influence you and your choice to be in the music industry?

Leah and I come from a wide musical community in Georgia, and each of our mentors and family members had a specific role in our decisions to play music professionally.   Mostly, they taught us that music is a gathering tool, something by and for the people, in celebrations and passings and occasions when the spirit needs to be called down. Having music as a backbone to our growing up allowed us to approach playing professionally in a grounded and authentic way.  It’s never been about “getting somewhere” for us, more about weaving music into our lives and following where it takes us.

LMNR: What was your favorite concert when you were younger and why?

I grew up in Atlanta, so hip hop reigned king.  I loved seeing the early versions of the Fugees, The Roots, and my hometown favorite Outkast. Outkast would just put on free shows around the city on occasion and blow our minds with their lyricism and performance craft. They are still an old time favorite of mine.

LMNR: Name your five favorite top bands and explain why?

Outkast- lyricism and flow
Trevor Hall- vocal prowess and depth of soul
Ibeyi- sister world fusion funk/soul/beats
Hozier- songwriting, harmonics, and really touching orchestration of his songs
Tinariwen- desert blues that is a go to anytime I feel like transporting to another place
Sent from my iPad

Many thanks to Rising Appalachia.

Drop us a line at [email protected] with your live music news, live show review, concert memory or just to say Hi!

Use the search feature in the upper right corner to search for your favorite artist, venue, event, or genre. You’ll be amazed at what you find.