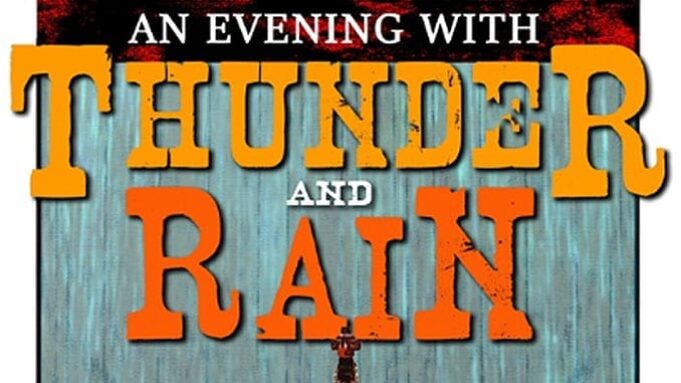 Thunder And Rain, hailing from Colorado, kicked off a midwestern tour at Byron’s Bar, Pomeroy, Iowa, on Saturday night September 7, 2019 with twenty-four songs, delighting an attentive crowd with their lush harmonies and accomplished picking skills.

Erinn Peet Lukes says they do “Acoustic Americana,” but some are tempted to pigeonhole them as “bluegrass.” They did do a bluegrass tune or two just to prove they could, but Peet Lukes pointed out that they don’t have a banjo, having “learned,” and mentioned jovially that “sometimes you just have to grow up and be an adult,” quickly adding that she was joking.

The band has been recording for about five years, and Peet Lukes’ writing skills are considerable. Their covers are respectful and well-chosen (even the somewhat unlikely Sweet Child O’ Mine, which vaulted them to some YouTube fame a couple of years ago). McCarthy’s mandolin expertise was called upon for extra duty due to the dobro player Cooke’s absence and he rose to the occasion. Haegele’s stand up bass held down the bottom and was notable when it was his turn to solo. (McCarthy recently won the Rockygrass mandolin competition.)

Byron’s Bar is the crown jewel of Iowa listening rooms and is a perfect spot for a quieter band like Thunder & Rain. Unfortunately, as many bands performing there mention, it is also the middle of nowhere, and if you’re driving from the Denver area, it’s a long haul over some pretty rural roads toward the end of the trip. The band was just a little late, and bless their commitment, headed straight from their vehicle to the stage and played without a sound check other than the opening “Angela.” The house PA balked a little, particularly the vocal microphone, forcing listeners to pay close attention to what turned out to be their beautiful harmonies. That didn’t particularly detract, though, and drew this listener in closer.

In my notes, I marked a few personal favorites: “Cut The Wire,” the lead track on their current CD, (Start Believing), “Travelin’ Soldier,” a Dixie Chicks cover written by Bruce Robinson, “Into The Mystic,” a Van Morrison cover,  “Angel From Montgomery,” the John Prine tune, and “Small Town Hero,” another original. Every other song they did was of equal caliber, so it might be silly to pick favorites.

Especially considering their ten hour trip to get there, the band delivered.

Check out the search feature in the upper right corner and search for your favorite band, venue, festival, or by genre. We have thousands of articles many with exclusive audio or video that you can see nowhere else.