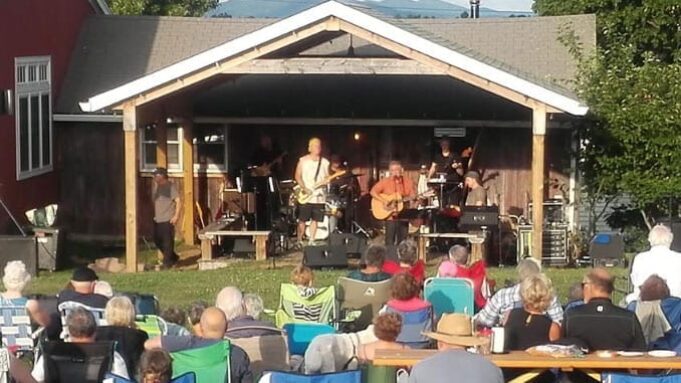 “You know” says the star of tonight’s show, “Woodstock was fifty years ago… so… this is IT!.” It takes a minute, but… oh, he’s just being silly… and we chuckle. There’s a lot of that with Roger Salloom.

“These’re some pretty good musicians up here, aren’t they?” is Roger’s way of leading into his band intros. Imagine my surprise when I heard the drummer’s name- Lincoln Hubley! I had no idea! Rudi Weeks on bass, that much I remembered same as last year, and the other guys have been with Roger right from the beginning- as in, decades.

It is no stretch to call Roger Salloom venerable, or a veteran of the scene, or just very good at what he does. He writes songs of course, and they’re well-crafted and intelligent, with a Steely edge of sardonic perspective. Roger’s job is also front-man, which includes an aspect of hosting, obviously. This may well be the job that Roger Salloom is best at. He sings real well, too, of course, with his dry flavor and articulate delivery… ok, the same can be said for his sense of humor… which plays right into his competent manner as bandleader.

Yes, competent. Much more could be said, but such a thing is best experienced first-hand. So, in searching for just the right word, we land right smack in the middle between ‘commanding’ and ‘comfortable.’ So, yes, ‘competent’ conveys the balance of attributes, all tempered with a measure of humility that comes with the package that is Roger Salloom. ‘Capable’ could cover it too, but none of these will fully inform the reader. For that to be done, the reader must become a listener. Which is a mighty fine idea anyway, and well worth waiting another year if we must.

Now, speaking for myself… my wife and I used to wait for Roger Salloom’s annual show at Look Park. The show is always free, by the way; that’s just Roger’s way of giving a little something back, with the help of a dozen or more sponsors. Once some friends turned us on to this event, we stayed loyal for the better part of a decade. The event might have been only five years running at the time; today is Number thirty six.

For whatever the number of years it might have been, that one concert must have been enough to do it for me till the next summer came. Otherwise, I wasn’t getting out much in those days. What with a family to raise and bills to pay, it was easier and less expensive to do my drinking at home, which might have had something to with the abrupt end to that phase of my life.

In a number of ways, those performances were my main source for a standard by which I have since formed impressions of a whole lot of artists. Roger gives a performance without putting it on too much, or “putting on a show” as many do- beyond authentic entertainment of the sort that comes from a real person, an individual of sincerity and authenticity.

He never talks for too long, but he packs a lot of reality into his banter between songs. He tells a couple of stories here and there, and he says a lot of funny stuff. This is not to say he’s up there cracking jokes or going for laughs directly; it’s more a matter of speaking from an open (and muchly repaired) heart and an active, intelligent mind. The output of all this is slices of observation from the unique and thinking perspective of a writer. James Thurber comes to mind.

The show rocks a lot. There are the slower, more message-laden or story-telling songs, and the star always works in his ‘wellishly known’ numbers, those which have gotten some radio airplay around the region. “I Gotta Get Outta Worcester” used to be the climactic closer for a number of years, with the requisite extended ending during which he would call out his very best line of all, while calling us all ‘li’l chillun:’

Tonight though, he center-loads the song like a center-piece, perhaps so that he can leave plenty of space for the Guest Fun. A couple of local heroes join the fray, like the bassist’s brother John, for instance. The Big Surprise, though, is the lady Ta Brown. One of those whose voice is filled with all the grace and grit of the greatest gospel singers, she pretty much steals the show- by design, that is; it’s like Roger is premiering his “new find.” He and his guitar step off the stage (or platform) just a bit, there to settle back for a few minutes, then step up and engage again, lay low for a minute, and cajole the band a bit.

Ta Brown is a Real Talent. Her presence is commanding and her voice demands attention. I had to catch her quickly to thank her after she came away, even though I was under the assumption that this lady was an international identity, a globe-trotting super-star. She was so gracious and humble as she expressed a sincere hope to “start” getting around the area that I soon realized she was mortal like the rest of us, self-conscious concerns and all.