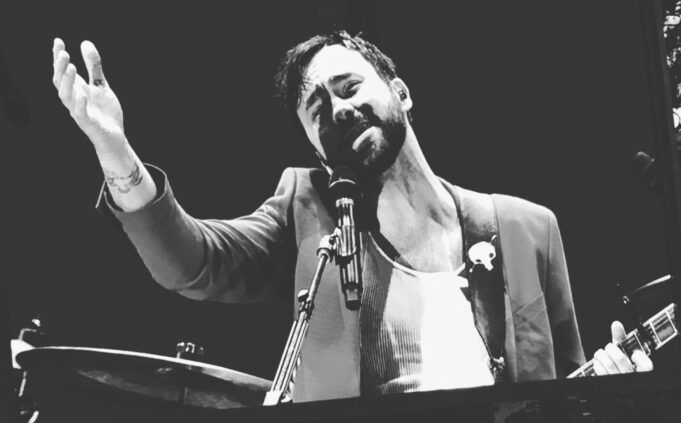 The last time Shakey Graves was at The Hollywood Bowl, the Texas native was 13 years old and saw The Who perform. Years later, reflecting on that time, it seemed like a heady experience in comparison now being on the same stage as that legendary band. The singer/songwriter co-headlined as an established and critically-acclaimed artist in his own right opening for Lord Huron on August 4th. The road to fame wasn’t overnight and hasn’t exactly been an easy one. Graves told the audience, particularly when he lived in L.A., “he was trying to figure out who he was and met bizarre, strange people in a crazy ass town that tried to give you advice.”  None of which he seemed to want to take. Instead, Graves trusted his own decisions and choices. While speaking to the crowd, he told some quick in-between song stories. Graves spoke about his life experiences that made him wise yet cynical, starting out in the entertainment industry as a newcomer in the business and the tough lessons he learned along the way.

The satisfying, 10-song set simply started with Graves as a one-man band with a suitcase kick drum. He wowed the crowd with an arsenal of gorgeous-looking electric guitars he played with a distinct skill and finesse that was incredible.  A born showman and compelling and intense presence, Graves dazzled the audience.

The Texas-born singer/songwriter later brought out his dynamic, versatile full band. Together, they completely won over the receptive audience and probably converted many to new, soon-to-be diehard fans. Graves has an emotive, compelling voice. Visually, he is like a man possessed with a strong, original presence that’s very upfront and real. The totality of the passionate for his craft was visible as he got physically got lost inside the music. This sonic immersion washed over him, but it never managed to overwhelm, as he was thoroughly in control of his artistry.

Dream pop, alt-rock and psychedelia were all part of this eclectic package. There were many high points in this rollicking show including “Roll The Bones,” “Big Bad Wolf,” “The Perfect Parts” and the barm-storming duet with American drag queen, singer/songwriter, comedian and television personality Trixie Mattel. Shakey Graves really has it all: undeniable gifts as musician, memorable and interesting songs and a gripping onstage demeanor that grabs ahold of you and doesn’t let go.

Not from this show, but a recent live performance by Shakey Graves: