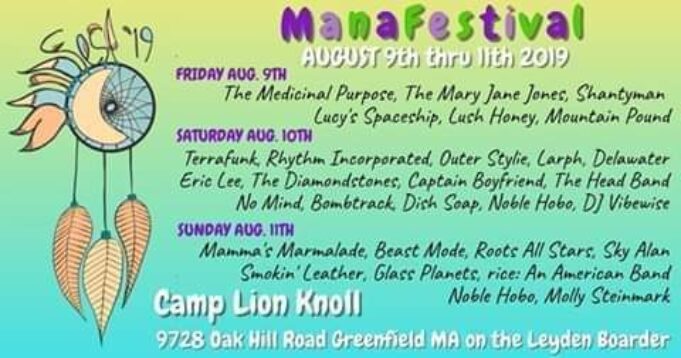 The second year of this fledgling festival took place in Leyden, MA

Watching a festival be born and grow up is a fascinating process. In its second year Manafestival took place down a dirt road in Leyden, MA, just adjacent to Greenfield. There were some growing pains for sure, including a venue move, but the New England festival family came together for 3 days in the woods for fun and relaxation.

I personally got there early evening on SAT after many bands had already played but I still got a really solid dose. Up first as I arrived the band Dish Soap was on stage and up to full speed. The band features Ashleigh Theroux on vocals and John Olivares on guitar and includes a full compliment of other players, too. I only was able to catch a few songs, but luckily the band members also appeared in other bands throughout the weekend. The part of the set I heard included multiple originals and closed with Bob Weirs “One More Saturday Night.”

Up next was the band Noble Hobo hailing from Michigan. Apparently they are friends with the promoter and came all this way, stopping and gigging in Montreal- to make their western MA premier. The band is a mixture of folk and poetry and have a traditional folk sense while being a bit avant garde as well. They were well received by the audience who seemed to respond to the modern beatnik vibe. Later that night they also jammed with their acoustic instruments around the bonfire.

The Diamondstones were to have taken the stage at that point but impending rain had them moving into the Dining Hall. It took a minute to change over but it was not a problem. The Diamondstones are vastly improving before their eyes and I dig them. With an emphasis on song writing, group jamming in the style of Phish or Twiddle, and searing guitar solos atop a quality rhythm section- The Diamondstones are well worth a listen. I have now caught them about four times and I dig it, and they are getting better each time I see them.

New England funk ensemble Terra Funk were up next. The band was super tight and featured Nicole on vocals, as well as Kami on vocals and sax and a million other tight players. Two keys, guitar, bass, drums and more all collided into a great mix of funk rhythms and melodies. I was impressed! This band has chops and pipes- OH! and horns too, dont forget the horns! At one point one of the keys players was getting so funky on a clav sound that I was transported. Well done Terra Funk!

I ran out of gas at the end of the Terra Funk set and returned home for a night sleep and to bring my kids back the next day. Being so close to home is always a joy at a festival- theres nothing like a good nights sleep and a shower before resuming the activities of a festivarian.