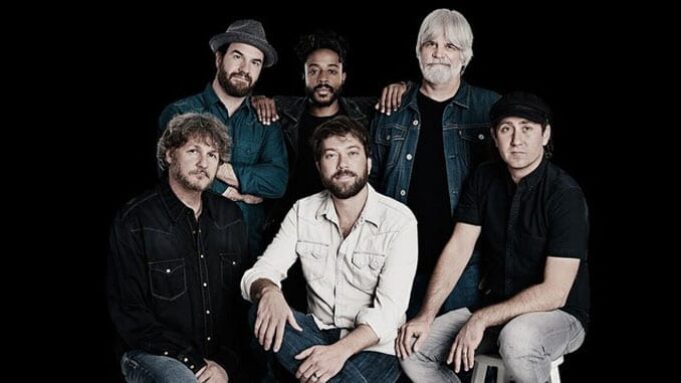 Few bands stick around for thirty years. Even fewer bands leave a legacy during that time that marks them as a truly special, once-in-lifetime type band. And no band has done all that and had as much fun as Leftover Salmon. NPR’s Mountain Stage says, “One of the most fun-loving bands you’ll encounter, Leftover Salmon has built a fervent audience with an insatiable thirst for living, and re-living, its energetic live performances,” while Offbeat calls them, “One of the most spirited, jovial bands of the jam band nation.”

Since their earliest days as a forward thinking, progressive bluegrass band who had the guts to add drums to the mix and who was unafraid to stir in any number of highly combustible styles into their ever evolving sound, to their role as a pioneer of the modern jamband scene, to their current status as elder-statesmen of the scene who cast a huge influential shadow over every festival they play, Leftover Salmon has been a crucial link in keeping alive the traditional music of the past while at the same time pushing that sound forward with their own weirdly, unique style.

Leftover Salmon’s Vince Herman says, “A long strange swim it’s been for salmon. Through many incarnations, losses, joys, festivals, bars, barns, mountains, rivers, oceans, benefits, weddings, and goat yoga sessions; we have kept the big ball rolling with a love of music and each other to keep ourselves plowing ahead the only way we know how. Thank you all for letting us have this much fun for so long.” Vince continues “We are really excited to bring in the new year (and celebrate 30 years as a band) at home in Denver’s brand new Mission Ballroom, an absolute state of the art venue we hope to call home for years to come.”

Drew Emmitt adds, “So excited to celebrate this auspicious milestone at the fabulous new Mission Ballroom with friends, family, and so many fans that have supported us these thirty years! What an amazing journey this has been and continues to be!”

The band formed in 1989 when members of two Colorado-based bands that occasional jammed with one another, Vince Herman’s Salmon Heads joined forces with Drew Emmit’s Left Hand String Band to play a New Year’s Eve show at the Eldo, a live music venue in Crested Butte. As the story goes, a couple of members of the Salmon Heads couldn’t make the drive from Boulder, so they recruited members of the Left Hand String Band to join in for the festivities.

The Salina Journal writes, “Leftover Salmon wasn’t meant to last more than one night, much less still be cooking 30 years later… [Since then] The band has recorded multiple bestselling albums and has been an influence on a younger generation of folk-rock and bluegrass bands.”

Heading into their fourth decade Leftover Salmon is showing no signs of slowing down as they are coming off the release of their most recent album, Something Higher (released in 2018), which has been universally hailed as one of the band’s finest releases. Something Higher shows how even upon preparing to enter their fourth decade Leftover Salmon is proving it possible to recreate themselves without changing who they are. Billboard writes, “By blending so many elements of two-step, rock ‘n’ roll, bluegrass and more, they’re able to repeatedly maintain a fresh sound, no matter how many years pass.”

The band now features a line-up that has been together longer than any other in Salmon history and is one of the strongest the legendary band has ever assembled. Built around the core of founding members Drew Emmitt and Vince Herman, the band is now powered by banjo-wiz Andy Thorn, and driven by the steady rhythm section of bassist Greg Garrison, drummer Alwyn Robinson, and keyboardist Erik Deutsch.