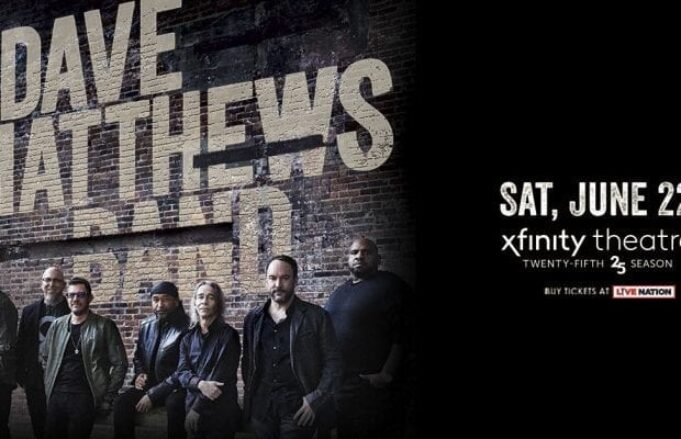 I had said to my wife that since we had gone to see DMB back in December that perhaps that was good enough for this year, and while she was disappointed she seemed to accept it. Then I thought back to all of the shows of my favorite bands she’s attended and the fact that we would be driving directly by the venue that day and I grabbed some tickets on Stubhub pretty easily.

We parked in an adjacent lot, and made fast friends with the group of folks who were next to us, drinking and joking and having a real good time. Their group ranged from brand newbies to DMB, to a veteran who was at around fifty shows or so. I counted for myself that this may have been my seventh and I think my wife is around nine or ten shows. We hung out, had a good time and then took our not so long walk into the venue.

We saw some friends on the way in, and made some new ones in the beverage line, such is the vibe of a DMB show. We staked a spot on the line pretty early on and got good sight lines and we were ready to go!

The band fired up and played for a good two and a half hours straight. The set list ranged from newer material to classic, and even an unexpected cover of Steve Miller’s Fly Like an Eagle. The band was super tight as we have become accustomed to expecting, with horns, guitars, drums, keys and bass all swirling and building up huge group sounds. Matthews himself bantered every eighth song or so, usually somewhat nonsensical patter but also expressed his gratitude for the fans who show up show after show.

Particularly in this venue in the Nutmeg state, we’ve come to expect some of the younger DMB fans, how shall I describe them? Coming from comfortable families, perhaps not real respectful of others, and perhaps bent on a good time as they see it- And we were happy that instead we were mostly surrounded by true fans who were fun and easy to hang with on a beautiful night. Not until nearly the end did the Pack of Chads show up (my wife and I brainstormed for a while as to what a group of these young fellows might be called- she thought Flock, but I am going with Pack..) and jostled around and invaded everyone’s space.

Not that it spoiled our good time even remotely… we know what the crowd is like here at this venue but its proximity to our home (about ninety minutes) and the easy parking make the Chad encounters not too difficult. Someone needs to counsel them on quality smokeables, but otherwise they are affable enough, I suppose.

The mood was good and positive all throughout the show otherwise and the band played straight til the end of the only set (I still have not gotten used to the one set concept) and returned for a lengthy encore.

What to say about DMB? This is a tight band, they know who they are, and what they do. They experiment but not too much, they have reached a comfort level with each other that is palpable. Buddy Strong has become a great fit on keys and backing vocals and his smiling visage is a bit of a replacement for the departed Boyd Tinsley. In particular Tim Reynolds is very comfortable and accomplished and he has his guitar pyrotechnics at the ready for whenever he is summoned which is about every other song. When not soloing he is adeptly supplying interesting sounds and inversions that add to the symphonic quality of the arrangements.