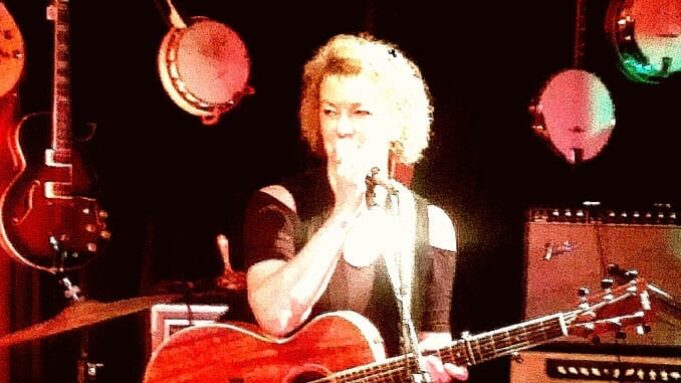 Performing live at Luthiers Co-op in Easthampton, MA on June 6 2019 by Jimm OD

“I went to catch a 720 bus at 730
Now I’m waiting for a friend to write the song
As it happened, I walked in before they started
Seems a half-a-mile really ain’t so long”

And how long has it been since I’ve had a sampling of Lisa Martin? We’ve been friends on Facebook for four-point-five years, so… there ya go… it’s something like 3.5 years. Clearly, as a friend is wont to say, “she ain’t got nothing but better.”

Now, I remember back those couple-few years, when Ms Martin started coming around the Sunday Blues Jam that was the happening scene most Sundays. She had a manner of professionalism that caused her to stand apart from most but not head and shoulders above them- though she could if she wanted to. Lisa Martin simply IS a professional. This shows true tonight, too- of course.

Looking around the room at Luther’s Co-op, I can see a few folks I would have seen back then, but at other bands’ shows. Now they’re here- they’ve caught on. Those who know good music show up at shows like this. Discerning audience delight in the demonstrations of others’ talents.

Another awesome individual is on the scene tonight- on the stage,  in fact. This happens almost every time at Luthier’s: at least one bonus personality/performer comes as part of the package, reminding me of a certain something said by a certain humble scribe back around those same years ago: One (or I) could just come here every night of the week, all seven of ’em, and get a good fill of good music every time, guaranteed.

That same humble scribe has stated, often and recently, that any chance to catch Carl Hopkins is a valid and valuable use of one’s time. This, you see… this Carl Hopkins feller… is one of the monsters around the area. Nobody’s ever bummed out for having sat and worship- I mean, watched Carl Hopkins do his thang.

Here’s the thing that always strikes me about Lisa Martin… besides her professionalism and composure as noted above: she sings really well. She sings nicely, she has a nice voice and a good voice; all those attributes are no less worthy of praise than the one that really stands out: she sings WELL. Lisa clearly has both talent and skill, and those are on top of just plain natural ability.

Now, let’s add another item to that inventory- and there are plenty of knowledgeable folks who would attach the most weight to this one: Ms Martin writes songs. She writes her own songs, and she does this every bit as well as she sings  (and picks her band-mates, too). An occasional ‘version’ will get sprinkled in to the mix here or there, but a Lisa Martin show is pretty much a singer-songwriter showcase, with plenty to put on display- though she is quick to offer a word of explanation for her crazy hair.

And speaking of ‘showcase,’ the lady’s professional ethic and commitment to the art-form is clearly evidenced by her involvement with area workshops and collaboratives including the Western MA Songwriters Collaborative in conjunction with other great musicians like Peter Newland and Paul Sticca . Lisa Martin is one hard-working professional and valuable contributor to the local music scene.