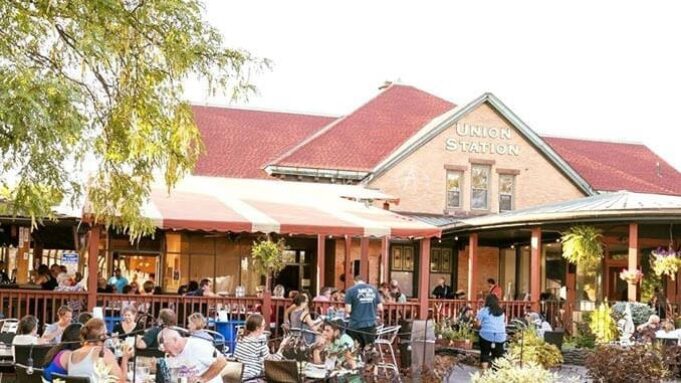 Located in the historic Union Station in Northampton, MA June 7, 2019 by Jimm OD

There’s all kinds of music going on every which way you look in this town tonight- all weekend, in fact- but I was still coming up one shy in my quest to check off every band on my list of one friend’s many bands. I had been thinking about staying home in bed and nursing my annual Early June Cold, but I spotted a notice for Hobo Flats on the Deck at the Platform Bar in Northampton’s Union Station. As it happens, this puts us right smack in the middle of all the goings-on with the first-ever Strong and Pleasant Music Festival.

Cleverly named for the two streets forming a block right aside the main street thru town (less cleverly named Main Street), the Festival is the mind-bogglingly brilliant brain-child of local hero Carla Racine. The sheer brilliance of this event lies in Ms Racine’s ingenious out-side-the-box, pro-actively solution-oriented thinking. The weekend-long, many-banded, multiple-venue event is set up to function much like a pub crawl: various musical entities are playing at a number of taverns around town, simultaneously and/or staggering schedules, with all the food one could want available at most of the venues. No mess, no fuss, no scrubbing the streets when it’s all over- brilliant!

That said, the focus of our attention right here and right now has nothing at all to do with said Festival. Ain’t that a hoot? Just piggy-backing an observation or two here; and offering-up a shout-out because it struck me how great that arrangement is. Did somebody say “brilliant?” Yes, and for good reason. Another benefit of the set-up is civility in the streets, as all this music is spread around the neighborhood and all indoors, I do believe- apart and yet a part, as it were.

Meanwhile, back on the Deck… hopping off the bus and hobbling over to Union Station, I couldn’t help but notice the exquisite perfection of the day, and how very fortuitous it was that I was headed for probably the only outside event. Ain’t nuthin’ like sunshine on a sunny day, I always say sometimes, and all’s it takes to bring the day the rest of the way to absolute perfection is music- the right music, especially!

Hobo Flats is sunny day music- so much so, that if the day happened not to be a sunny one, this band’s playing and repertoire would surely prevent the dampening of any spirits. Rootsy, folksy, singer-songwriter stuff that steers clear of the obvious, keeping to a minimum the Southern California Seventies singalong radio songs and opting instead for a stimulating sampling of deeper cuts and almost-underground artists… and originals!

The band’s own compositions fit so well with the rest of the material that I thought I was hearing something I’d never heard before. And I was, but not because I’d missed it on the radio. Rather, these songs synch so well stylistically that the unaware audient, accepting of something new when it’s so tastefully proffered, will find nothing egregious to the ears, nothing whatsoever to complain about- which is quite an accomplishment, especially in the case of one humble scribe in particular.

And there we have it: summary says, tasty! As the last set moves along, a few uncharacteristic numbers sneak into the set-list (Traffic, Blind Faith) and segue right along with the rest, just by way of their tasteful execution. These guys got a little Motown in their movement too, just enough to liven up the stuff with a hint of soul. This hint of slightly suspected, smooth funk kinda comes to fruition at the very end in the form of Marvin Gaye- as if to say, “yep, dass right, we got some o’ dat all up in heah, too).

The instrumental mix here is pretty spot-on. This is not a guitar-hero showcase band, but there’s no lack when six-string pyrotechnics are in order. The keyboards’ sound and function are integral and essential to the overall aural body just as much as the guitar (and those other instruments too, I suppose lol). Rather than simply filling out the sound and adding the pointed piano solos, the many sounds available are put to good use- strings f’rinstance, as well as organ of course, and judicious application of other sounds without going all techno-tronic… like, I’m pretty sure I heard an accordion in one place.

When I heard the sound of a flute, however, it caught my notice that I could also hear piano, so I looked up- I hadn’t even noticed the long, slender silver implement waiting in its stand. I DO love me some flute- always a welcome treat… and tasty, too!

Another thing kept coming to mind at various times during the three sets Hobo Flats delivered tastefully to this mostly dinner crowd: methinks I whiff a waft of a certain sweet jamminess to the palette: namely, Dead-i-ness. This is not to suggest that Hobo Flats is within the wide swath of bands irrevocably indebted to the Dead for their main wellspring of inspiration to the extent derivation or even imitation- no, not by a long shot. The quality of Taste has already been identified and asserted here- Hobo Flats plays tasty tunes tastefully, they choose their material tastefully, and their originals are integrated with integrity and taste.

Add to all this a free-wheeling feeling such as goes with summer days and mountain air, and it can’t help but suggest an underlying attitude and overarching atmosphere of Dead-i-ness. This can be dangerous for some, insulting or even boring for others, but in the case of Hobo Flats, the subtle inclusion of a certain multi-genre mind-bending quality within the structure of a Roots tradition, all adds up to an infusion of Dead-i-ness. But not too much. These are not imitators, any more than they are “just” a covers band- Hobo Flats is too full of taste to be typical.