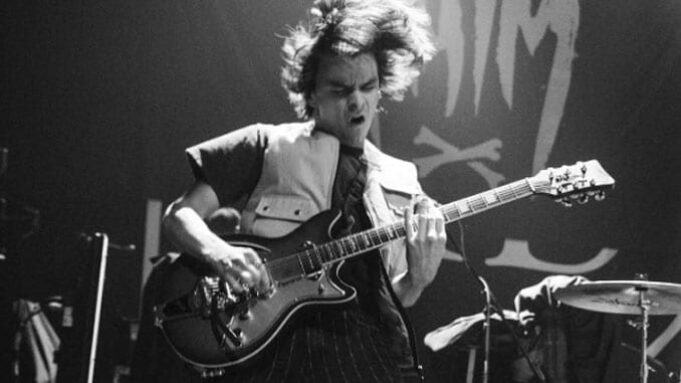 The Australian alt-rock/pop band, The Faim, roared into New York City’s Gramercy Theatre on Wednesday night supporting Andy Black of Black Veil Brides.  Their forty minute set kicked some serious ass, and the sellout crowd was eating it up.  Led by vocalist Josh Raven, wearing a red plaid suit and displaying a pride flag on his mic stand, Raven was the star of the night.  He ran all over the stage, on the speakers, and in the crowd.  Along with Raven is Sam Tye on blistering lead guitar, Stephen Beerkens on bass/keyboards, and on drums is Linden Marissen.

The Faim played a dozen songs and among the highlights were Make Believe, an passionate song that’s about feeling exposed to the world around you.  A Fan favorite is Summer Is A Curse, with it’s upbeat and catchy hooks.

The band got their start with renowned producer John Feldmann (Blink-182, Good Charlotte), who was so impressed with their early demos that he invited them out to LA to record with him. There, they enlisted the help of several notable co-writers, including Pete Wentz (Fall Out Boy), Mark Hoppus (blink-182), Josh Dun (Twenty One Pilots), and Ashton Irwin (5 Seconds of Summer).  Currently, The Faim only has a six song EP out with a full-length album due out sometime this year.

The band will be on tour for another two weeks in the States, and if they’re coming to a city near you, be sure to catch this band.  They’re the real deal.

Saints of the Sinners

My Heart Needs To Breathe

I Can Feel You

Summer Is a Curse

May 6 The Intersection – Grand Rapids, MI

May 11 The Majestic Theatre – Detroit, MI

May 13 The Opera House – Toronto, Canada