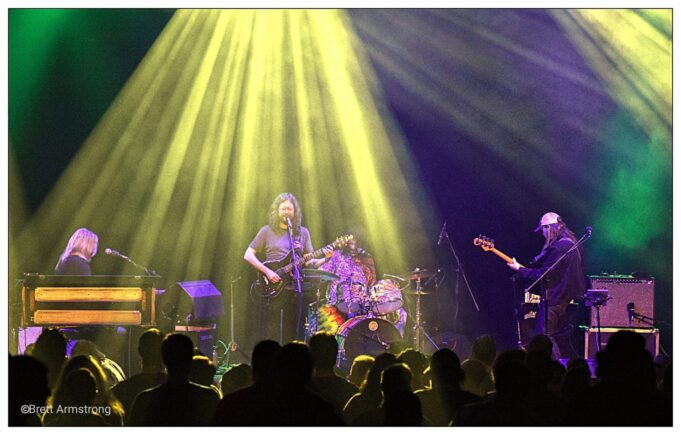 Photos and Words by Brett Armstrong

Editor’s Note: This is a bit of a first. There is a nice review by Ryan O’Malley of this very show from a few weeks ago. But there’s room in the world for two sets of opinions, so why not two reviews of the same show? Read Ryan’s review, here.

A few weeks ago, I had the pleasure of catching the Golden Gate Wingmen at the Sherman Theater in Stroudsburg, PA.

Full show audio. Taped by Fred Nicolois. Use the arrows to toggle between songs. Why not listen to the show while you’re reading the review?

I had seen 3 of the members musical chops, John Kadlecik, Jay Lane, and Reed Mathis, at the Unlimited Devotion fundraiser at the Ardmore Music Hall, and was excited to see what these four musicians playing together had to offer. Only Jeff Chimenti had I not had the pleasure of hearing live.

I scored a press pass from the GGW booking agent and arrived early to settle into the photo pit to do some light metering and pick out my target shooting spots.

After a great set by the southern Florida based band, “The Heavy Pets” and a brief intermission, the lights dropped and the foursome took the stage.

Personally, I am not a big set list guy. Having seen the Grateful Dead more than a couple dozen times, I get the mystique surrounding hearing songs you love, getting a beautifully looking set list, or catching that elusive rarely played tune.

But for me, it’s all about the moment. It’s about appreciating in present time the tunes the band has chosen to play on this specific night.

This being said, and being a huge Bob Dylan fan, I was excited to hear them open with one of my favorite Dylan tunes “It Takes a Lot to Laugh, It Takes a Train to Cry.” Later in the first set, they played a sweet rendition of “Queen Jane Approximately.”

The second set opened with another one of my favorite Dylan tunes, “When I Paint My Masterpiece,” and later on, another Dylan tune “The Man in Me” gave me an unexpected treat I wasn’t expecting. I DID say I wasn’t a set list guy right??

Of course, some Grateful Dead tunes were strewn into the night including a sweet “Cassidy” after the opening number, and a second set “Dark Star” followed by “Shakedown Street.”

For the second set, I was able to go up in one of the balconies close to the stage. This gave me a great vantage point to take some photos and experience the magic occurring between the band and the fans.

As the second set went on, I was really getting an appreciation for what this band had to offer and the chemistry between the members.

I especially enjoyed listening to the deep base lines from Reed Mathis as he dipped the neck of his bass up and down like the keel of some old ship crashing it’s way through the waves of the music.

I am looking forward to seeing this band again, and luckily, I will get to see 3 of the 4, (all but Jeff Chimenti) once again at the Ardmore Music Hall for the Unlimited Devotion fundraiser show.

A big thanks to the Golden Gate Wingmen, the energetic fans, and the superior staff at the Sherman Theater for a fantastic evening!!

Editor’s Note: This is a bit of a first. There is a nice review by Ryan O’Malley of this very show from a few weeks ago. But there’s room in the world for two sets of opinions, so why not two reviews of the same show? Read Ryan’s review, here.