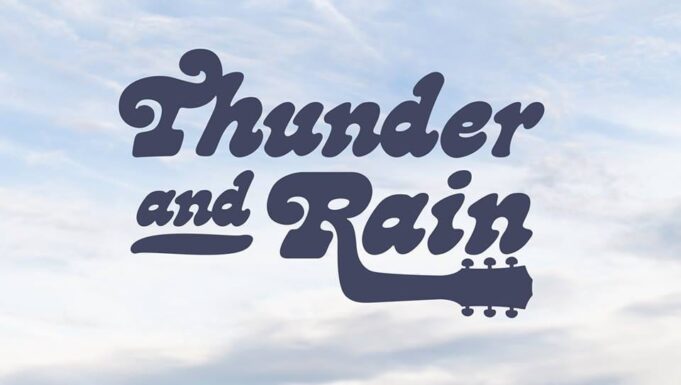 Performing live at Be On Key Psychedelic Ripple in Denver, CO April 20 2019

About nine months ago, an old friend who played in the band Henhouse Prowlers reached out to me and said “You gotta check out this band, Thunder and Rain.” He sent a video link to me of the band doing the Guns n Roses’ classic, Sweet Child o Mine. I am no GnR fan, but the way that this band did this song, it really was amazing to see their recreation of it in a whole new genre. Now, I know that is not a new trick by any stretch, but something about them was intriguing, and worthy of taking a deeper look.

Eventually the video disappeared from youtube, but not before amassing nearly 7 million views. As you can see from the above video that someone else has posted it (a fan, not the band), it’s starting to get views again. So from there, I got to know the band as the algorithms took me to more of their songs, and their originals are just as good, if not better, than the covers they do.

So it was with great anticipation that I found myself in Denver on April 20th, heading to one of the hippie meccas of America, Be On Key. This venue is the continuation of a line of venues operated in Denver that I knew when the proprietor had several locations of a venue called Quixote’s, and since then has morphed into this location at 17th and Lombard. I will talk more about the venue in subsequent reviews that I have upcoming, as I spent the whole weekend there and have lots to say about it!

As the night started, I caught a quick glimpse of the band, Swimmer, out on a stage in the parking lot. I went inside and got to see the sound check for Thunder and Rain, which merely served to whet my appetite. The band consists of Erin Peet Lukes front and center supplying vocals and guitar, leading the band both with pen and her stage presence. Backing her up are Ian Haegele on upright bass and backing vocals, Dylan McCarthy on mandolin and backing vocals, and new comer to the band, Allen Cooke, on dobro.

The band did not disappoint in the least. Over the course of the next hour and a few minutes, they showed every bit of the promise that my mind had imagined. The show featured what for me seemed like almost entirely original songs. From the songs that I recognized like Cut the Wire and Run with You, to songs that I recognized less like Tennessee is Burning and Small Town Hero.

Small Town Hero was particularly intriguing to me as it was a great song, very evocative through its lyrics. It’s a great representation of who the band is, “I don’t want to be an Asheville waitress, I don’t want to buy another used mattress, don’t want to play the blues, don’t want to pay my dues.” Tales of life in a small town, tales of what it might be like to be developing yourself in this vast country of ours.

I had thought that the band was a bluegrass band, but that is a pigeon hole that doesn’t completely tell the whole story of Thunder and Rain. Bluegrass, classic country, americana, and just great song writing and story telling is the hallmark of this band who defy classification. But fans of any of those styles will find what they like in this band’s performance for sure.

But of course, with the instrumentation the band is also a bluegrass band, and the strength of the individual players is quite evident. Strong picking skills from both Cooke and McCarthy as they took their turn soloing. And Ian Haegele anchors the bottom end and provides the rhythmic foundation on which the band sets, but also was not afraid of a bit of flair when it was his turn.

Late in the set, Erinn Peet Lukes roasted her band mates a bit, and had them leave her for a song to perform on her own. Wanting to sing a song for America itself, she busted out with her own version of Paul Simon’s America. This was perfectly illustrative of her ability to reach beyond genre and tap into a quality song and make it her own, and to make the notion of country or bluegrass to be universal beyond a certain place, or a certain sound.

I was doubly impressed with Thunder and Rain, they rang every bell that I was hoping they would ring before I had seen them. This is a band that I could easily see over and over again.